We returned you to your regularly scheduled Yusmeiro Petit starts today, as the Petit Unit allowed 4 runs (3 earned) in just 4 innings pitched to get the loss and break his own brief scoreless inning streak. However, Petit wasn't even close to being entirely to blame; he had some help from some vintage early-season clutch hitting and defense, while once again, the Dbacks scored all their runs via the longball. A piss-poor bullpen outing from Scott Schoeneweis, didn't help, either, nor did an easy caught-stealing call.

Story after the jump.

The Arizona Diamondbacks turned in an all-around lethargic and sloppy performance today in a rather sad way to end what had otherwise been a pretty decent road trip. After taking 3 of 4 at the Mets and sweeping 3 games from the Pirates, the Dbacks found themselves on the other end of a sweep, as the Washington Nationals took a 3 game set from Arizona in Washington, DC.

It all started off so well, too! New Snakepit favorite Trent Oeltjen led off his 3rd career major league game with a line drive solo home run barely into the Nationals' bullpen to give the Dbacks a quick 1-0 lead. Pretty good start against a guy who came in with a 7.16 ERA, right? However, the lead rapidly evaporated, as Petit allowed a 2-out ground rule double to Ryan Zimmerman (his first of two), followed by a towering home run from Adam Dunn, and the Nats took a 2-1 lead they would never relinquish.

Neither team scored in the 2nd, although former Attorney General Alberto Gonzalez doubled and Petit gave up a single for J.D. Martin's first career hit. In the 3rd, the Nationals began to pull away. Oeltjen beat out a 2 out infield single in the top of the inning, but was easily gunned down trying to steal 2nd base with Ryan Roberts at the plate. In the bottom, Zimmerman led off with his 2nd double of the game, Dunn popped out, and after intentionally walking Josh Willingham, Chris Snyder quickly caught Willingham off the bag. It was a pretty fortunate out, as Petit next uncorked a wild pitch, sending Zimmerman to 3rd. With a chance for Petit to escape the inning unscathed, Elijah Dukes hit a very sharp grounder that ate up Mark Reynolds, bouncing off his glove and over his head into left field. Some 3B might have made that play, but to be fair, it was rightly ruled a hit, as Zimmerman came home to score the last run the Nationals would need. Nationals w/ RISP: 2-4 on the day.

Things looked slightly rosier in the top of the 4th, when Reynolds drew the first of his 2 walks with 2 outs in the inning, followed by a Chad Tracy single, but Chris Snyder flied out. Dbacks w/ RISP: 0-1 on the day. In the bottom of the inning, Petit got two quick outs, and should have pitched a scoreless frame, but Nyjer Morgan singled, stole 2B, and then Cristian Guzman slapped an infield "single" to Reynolds.  Guzman may or may not have been safe anyway, but Mark's rushed throw to first allowed Morgan to score as it went by Tracy and to the fence. Nats w/ RISP: 3-6.

The Diamondbacks REALLY squandered opportunities in the 5th and 6th. In the top of the 5th, Alex Romero led off with a single, followed by Chris Young's double with no outs. However, Josh Whitesell popped up for Yusmeiro Petit, (Muchas graciás, said Petit in the dugout) Oeltjen bounced a swinging bunt straight to Martin, and Ryan Roberts grounded out to 2B. Dbacks w/ RISP: 0-4. In the 6th, Stephen Drew and Reynolds drew no-out walks against new Nationals pitcher Tyler Clippard, but Riggleman replaced Clippard with Jason Bergmann, who got Tracy to fly out and Snyder to ground into an inning-killing double-play. Dbacks w/ RISP: 0-6.

Clay Zavada came on and pitched a perfect 5th but had a rough 6th, going single, popout, single, walk, to load the bases with 1 out. AJ Hinch pulled 'Stache for Leo Rosales, who threw 6 straight balls to walk in one of Zavada's baserunners. Rosales then calmed down, getting Zimmerman to ground back to the mound to choke off the run at home, while new catcher Miguel Montero inexplicably threw to 3rd after realizing there was no play at 1st. The decision didn't hurt, as Dunn struck out. Nats w/ RISP: 3-8.

More of the same scoringFAIL for the Dbacks in the 7th, as Romero led off with a single and was immediately killed by Chris Young's GIDP. CY seems to have a unique ability to hit a ground ball JUST when we needed him to strike out or pop up, since the next two batters singled but were stranded by Roberts' K. Dbacks w/ RISP: 0-7. Rosales had a perfect bottom of the inning.

Despite Mark Reynolds' best effort, it went from being a 4 run game to a 7 run game after the Dreaded Eighth Inning (TM). Mark's solo shot with one out made it 5-2 and tied him with Albert Pujols for the most home runs in the majors, but Chad Tracy's subsequent single was erased when Gerardo Parra, pinch hitting for Leo Rosales, grounded into a double play, practically jogging down the line to 1B while doing his best Felipe Lopez impression.

In the bottom, AJ Hinch inexplicably pulled a truly Melvinesque move in bringing in Scott Schoeneweis to face four right-handed batters, a switch-hitter, and one lefty. By now, the results were all too predictable, and CY decided to get in on the action, too: Single; Groundout; Single about 2 feet in front of CY and bobbled; stolen base; single to CY; error on CY; single; sacrifice bunt. Hinch finally pulled Schoeneweis with the score 7-2 and runners on 2nd and 3rd. He lasted for 2 outs, and one of those was a gimme on a sac bunt. Blaine Boyer decided to clear the table, not wanting to have to deal with inherited runners, so he quickly gave up a walk and a single to allow two more of Schoeneweis' runs to score before finally getting the 3rd out. Clearly eager to get on the plane and leave the Nationals' House of Horrors, the Dbacks obediently went down in order in the 9th.

Nobody had a particularly good game today. Trent Oeltjen had an infield single and solo homer, and finished 3-4, but was caught stealing and had an error assessed against him. Reynolds had two walks and another home run, but also an error. Tracy and Romero each had two hits, while Montero and CY(!!) had a hit each and Drew drew a walk. Yusmeiro Petit's ERA went from 5.81 to 5.87; Clay Zavada's went from 2.97 to 3.13; and Scott Schoeneweis' went from 6.63 to 8.24. The team cranked out 10 hits yet only scored 2 runs, partly due to going 0-7 with runners in scoring position and partly because of THREE double plays grounded into.

Something tells me the Dbacks are glad to be on the flight back to Phoenix about now. 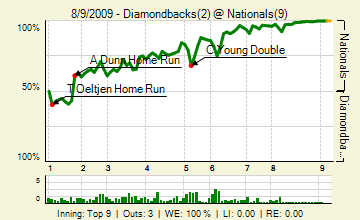 Present and accounted for in the Gameday thread were.... well, some guy who had the most comments, and then soco, snakecharmer and Wailord coming in 2nd, 3rd, and 4th, respectively. Other posters included Azreous, myself, ZonaBacks10, 4 Corners Fan, drvnlow, mrssoco, katers, TwinnerA, kishi, pygalgia, Zephon, Jim McLennan, unnamedDBacksfan, Gravity, rapdawg, and emilylovesthedbacks.