Diamondbacks 2, Nationals 5: Mock Around the Clock

Share All sharing options for: Diamondbacks 2, Nationals 5: Mock Around the Clock

As mentioned in the Gameday Thread, it's remarkable how things change - we now find ourselves eagerly anticipating Yusmeiro Petit outings and dreading Dan Haren ones. Ok, that is a bit of literary hyperbole, but Haren was, once again, a pale shadow of the pitcher who dominated the first half of the season. He gave up five runs in six innings - that's his fourth consecutive non-quality start, after delivering one in 18 of his first 19 games, and his second-half ERA is now up to 4.94. His formerly league-leading number there now train Lincecum, Cain and Carpenter, and he'll need to turn it around if he's to have any hopes of Cy Young votes.

About the best thing to be said about the game from an Arizona perspective, is that at least it was mercifully quick. Two hours, 12 minutes made it the shortest game of the season to date. I get the feeling my recap will not be a long one either, but details after the jump.

But what about those Nationals? Just a week ago, Washington were on pace to lost 112 games. But since then, they've reeled off seven straight victories - and, I have to say, looking at the way they have played against us, it's difficult to see exactly how they managed to go 32-72. They have a line-up that is capable of hurting you in a number of ways, with speed, power and simply by getting hits. Ok, their rotation is not going to strike fear into anyone. That said, however, former Arizona prospect Garrett Mock silenced the...er, mockers, doing what Haren couldn't, and delivering a quality start for his team.

So, what is up with Haren? Let's start with his line over the past four starts combined:
Haren: 23 IP, 27 H, 5 BB, 16 K, 17 R, 16 ER
Looking at that line, what stands out is that more than half the base-runners he has allowed have come around to score - 53%, compared to 31% prior to those starts. Some of that is down to the home-runs allowed; his rate here is a Petit-esque 1.96/9 IP, more than double the 0.89 previously [obviously, if you give up long-balls, you don't strand runners]. And the WHIP is also sharply up: I can't say that's too unexpected as his first-half BABIP was basically unsustainable at .233. It might be interesting to compare the pitch/fX numbers, see if there's been any velocity change or obvious difference there. Perhaps tomorrow. [No promises!]

At least there seemed to be no trouble from behind the plate - the game passed without incident, and there seemed to be no issues with the strikezone. Though perhaps the Nationals simply didn't need any help from Jerry Crawford, doing quite a good job of swatting Haren about on their own. I couldn't tell if the home-plate umpire was smiling behind his mask... The fourth was the key inning. Arizona came in 2-1 up, courtesy of Mark Reynolds' 35th home-run of the year [one behind Pujols for the major-league lead now]. Six pitches later, however, the Nationals were back ahead and had a runner on third.

The Diamondbacks never seriously threatened beyon that point, managing only one hit over the final five innings, their last twelve batters in a row making outs. Gerardo Parra had two hits, while Reynolds added a walk to his home-run - still, five hits isn't going to cut it. Chris Young was 0-for-4 with three strikeouts, dropping his season average to .193. I just don't know what to say any longer, but I was introduced to a new feeling after watching his third consecutive strikeout this evening - genuinely looking forward to the return of Eric Byrnes. We did get Ryan Roberts back; though he reached the park too late for first pitch, he came in as a pinch-hitter in the seventh. 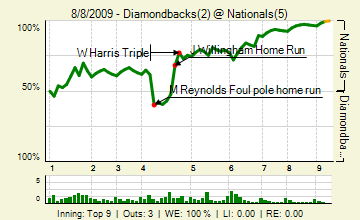 The steam has certainly gone out of the Diamondbacks' success after the past couple of days: they are both games that we could have won [and in yesterday's case, should have]. The result was a very quiet Gameday Thread, falling just short of two hundred comments and didn't so much finish, as peter out into nothingness. hotclaws and ZonaBacks10 led the way: participating alongside them were mrssoco, TwinnerA, 4 Corners Fan, kishi, Spaghetti_Monster, luckycc, Zephon, BattleMoses, victor frankenstein, unnamedDBacksfan and AZBOMBERS.

And so, tomorrow, we turn to Yusmeiro Petit to avoid the sweep by the Nationals. Funny, that sentence would probably have sounded a great deal worse a couple of weeks ago. With it being another East-coast day game, I will be making use of the 'scheduled post' button on the Gameday Thread. 'Skins on the recap.