We say it because AJ Hinch can't: Jerry Crawford is a grade-A ass who should be suspended

Share All sharing options for: We say it because AJ Hinch can't: Jerry Crawford is a grade-A ass who should be suspended 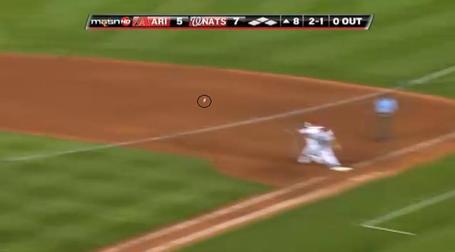 Thanks to TAP for the framegrab. Note: ball (circled) and runner's foot on first.

We turned our top-quality team of lip-readers on the confrontation between AJ Hinch and first-base umpire Jerry Crawford last night. Here are their surprising findings.

"Jerry, you got that call wrong and you know it, don't you?"
"Yeah, AJ, you got me. Unfortunately, umpires are like the Pope. We have to maintain the illusion of infallibility. Anything I can do to help make up for it?"
"Well, actually, I've been trying to get thrown out of a game for a bit - become a 'real' manager - but I haven't been able to do it somehow. Would you oblige?"
"Oh, sure - it'd be my pleasure. Can you just yell something insulting at me?"
"No problem. YOUR MOTHER WAS A HAMSTER AND YOUR FATHER SMELT OF ELDERBERRIES!"
"Ah, Python fan, eh? Well... YOU'RE OUTTA HERE!"

Who knew? Who knew? More after the jump, including why Crawford just turned me into a firm believer of expanding instant-replay.

Let's start with some post-game comments from Hinch - funnily enough, anything from Crawford was nowhere to be found on the record.

It was a close play to lead off the inning and obviously I disagreed with the call and the subsequent reaction was not right either. I still feel like I was right... I would be very disappointed if any umpire carried something over. He's got a lot of tenure in this league and I expect his best effort.

Yeah, good luck with that, AJ. We saw Crawford's best effort last night, and it was woefully inadequate. Baseball umpires get the vast majority of calls right, probably more so than most pro sports officials - though it has to be said, their job is a relatively easy one, compared to, say, the NFL, where 22 players are running in different directions simultaneously, each of whom could potentially be committing an infraction. But this wasn't even a call that required any kind of instant replay, or to be seen from multiple angles. I'm not exaggerating when I tell you that the moment it happened, I yelled "He was safe!" at the TV - it was that obvious.

Ok: no-one is infallible. These things do happen. However, the problem is that Crawford took exception to the error being noticed by Hinch. A manager of half a season's experience? How dare he talk to a 33-year veteran like that? Don't you know he was the president of the umpire's association during their glorious 1999 strike? Er...never mind. So Crawford's reaction was more like an opera diva's - "These things do happen? Until you stop these things from happening, this thing does not happen! Ubaldo! Andiamo! Bring my doggy and my boxy!" It was a temper tantrum more befitting of a three-year old than one of the most experienced officials in the game.

Will MLB do anything? I mean, if one of my co-workers - whether my boss or not - went off on me in anything like the same way, I would certainly expect HR to to take action. But this is baseball, so the odds are probably Crawford will get away with his unacceptable histrionics. However, there is precedent. Remember when Mike Winters got in a spat with Milton Bradley, when he was with the Padres? And Bradley ended up getting wrestled to the ground by his own manager, in the process suffering a season-ending injury? Winters ended up getting suspended for the rest of the year, "because the commissioner's office concluded he had used a profanity aimed at Bradley."

It doesn't take a master lip-reader to conclude Crawford used an entire barrel's worth of profanity - not just at Hinch but, it appears, the Diamondbacks dugout and, in particular, Dan Haren. Admittedly, it does not appear that Haren was keeping his responses to the PG-rating level either, so maybe it's best that bad language alone doesn't merit a suspension [from what I recall, the word Winters allegedly hurled at Bradley started with an n, which moves things to a whole 'nother level].

The key question will be whether that exchange has any impact on the game tonight - which features Haren on the mound, and Crawford behind home-plate. I wonder if it might be politic for the umpires to quietly re-arrange the schedule so Crawford works tomorrow instead, though again, this would be acknowledging there is at least the potential for a problem, so I doubt they would be so sensitive. If he does call the balls and strikes, I know Arizona fans will be carefully monitoring things to see whether he does hold a grudge [and I'll be reviewing the pitch/Fx data on Sunday!]. I certainly hope it's not the case - but then, I've never seen an umpire apparently infected by rabies in quite the same way...

The entire matter would have been defused had there been instant replay available. Hinch would have challenged it, and the call would have been reversed, with little or no debate. Frankly, I don't see why they restrict its use to home-runs. The most important thing is to get the call right, and if it takes a couple of extra minutes to do so, I don't have a problem with that [it's baseball, after all, the most timeless of all sports]. Perhaps we can use the official scorer as a "replay umpire", with a connection to the crew chief. When an obviously-blown call happens - and they don't get much worse than the 15 feet between the ball and first-base shown in the screen-grab - then the scorer alerts the chief and the play gets reviewed.

For losing is one thing. But losing because of a mistake by an official is a great deal worse, and every step possible should be taken to avoid that. The current failure to do so is a dis-service to the players, and reflects badly on the umpires as well as the game in general.