Congratulations to AJ Hinch who popped his managerial cherry this evening, getting tossed out by first-base umpire Jerry Crawford after arguing a call during tonight's game against the Nationals. While AJ was perfectly correct to do so - the call was unquestionably blown, and that was clear on the initial play - it didn't help the Diamondbacks, who saw their five-game winning streak come to an end.

Just a shame that Crawford's incompetence turned out to be a deciding factor in the game, rather than only the skills of the players. However, neither Jon Garland nor Gerardo Parra had games they will want to remember, and the Diamondbacks lost a five-run lead, built as the result of three home-run in the second inning.

The Nationals had just taken the lead on a two-run single in the seventh, leaving Arizona only six outs to climb back into the game. It looked like a promising start, as Trent Oeltjen hit a ground-ball up the middle and used his speed to leg out an infield hit, beating the throw from the shortstop. However, first-base umpire Crawford called him out, and Hinch sprinted from the dugout to, shall we say, 'discuss' the matter. Previous efforts to get tossed by AJ have proved futile, but it didn't take long for the arm to come up - and nor was that the end of the matter.

Rather than returning meekly to the dugout, he gave full vent, and Crawford was bumping into our manager like a belligerent walrus [though a walrus would probably have got the call right] - it's always struck me as wrong that it's ok for umpires to bump people, but not the other way round. And even after finally departing the field of play, Dan Haren took up the cause, showing unity with his manager and adding his two-cents' worth - more evidence of the respect in which Hinch is now regarded by his players. However, since Haren will be starting tomorrow... With Crawford behind home-plate, I believe... Well, we'll see.

Back in the game, one can only wonder what might have happened had the little blue-clad Napoleon made the correct decision. For the next three Diamondbacks all reached base safely, and Stephen Drew followed with a sacrifice fly. However, instead of tying the game, that made it a one-run Nationals' lead, and though we got the run into scoring positioon in the ninth, Arizona came up just a tad short. Our streak ended, but Washington's rolled on, and they've now won six in a row.

It was quite a different conclusion from how it looked like this would go early on, with the Diamondbacks running away to a 5-0 lead, scoring all those runs in the second, courtesy of solo home-runs from Mark Reynolds, Josh Whitesell and a three-run blast from Drew. Unfortunately, the surge appears to have taken it out of our offense, as between that and Drew's eighth-inning sacrifice-fly, they failed to add any more runs, a shortcoming which ended up proving fatal despite the team providing free tacos for the fifth time in the past week.

Reynolds ended the day with three hits, and his season average is up to .288. Alex Romero, Gerardo Parra and Augie Ojeda each had a couple of hits, while Whitesell got a hit and a walk. However, Parra's second-inning mistake in center was a two-base error which led to the Nationals' first run, and was not his only poor play - part of the price of not playing Chris Young, benched for the second straight day. Oeltjen couldn't quite repeat his heroics of his debut, going 1-for-5, even if he can legitimately gripe that it should have been 2-for-5, except for the evil ump.

Jon Garland's run of quality starts came to a halt as the Nationals clawed their way back into this, largely courtesy of the three runs allowed in the fourth. Four straight hits, including a pair of doubles [though Parra didn't exactly impress on one of them], led off the inning for Washington, and though our starter buckled down, retiring the next three hitters, the damage was done and the Nats were back in the game. All it took was a solo shot from Zimmerman, and the game was tied. Garland left with a no-decision, going six innings and allowing five runs, four earned, on eight hits and a walk. I was surprised to see him out for the last one, having already thrown 103 pitches, but I imagine Hinch was trying to save the bullpen after last night.

Unfortunately, they were not quite as effective this evening, Juan Guterrez taing the loss with three hits and a walk in the seventh. The fateful decision was to walk Adam Dunn, loading the bases, and pitch to Josh Willingham instead - it didn't work, Willingham slapping a pitch to left-center that gave the Nationals the lead for the first time. Can't really blame Gutierrez too much, since it was the first earned runs he had allowed in almost a month, covering nine inings since July 9. Esmerling Vasquez delivered a 1-2-3 ninth, looking pretty good in doing so. 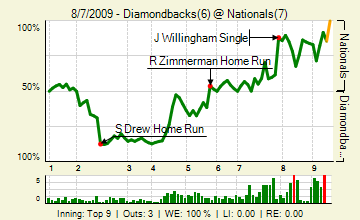 Never a good evening when you lose a game where your Win Probability was 87.9% in the second inning, but credit to the Nationals for coming back, never giving up. Chris Young's pinch-walk was the biggest help to our chances: Drew's four RBIs, in case you're wondering, merited only 3.7%, mostly because the sac. fly was -8.1%, the out he made with the bases-loaded and one down heavily outweighing the run which score. A light Gameday Thread compared to last night, with only 263 comments. 'Charmer beat 'Skins tonight, with ZonaBacks10 completing the podium. Also present: sayheyupton, mrssoco, Fiona, IHateSouthBend, venomfan, Spaghetti_Monster, luckycc, Clefo, kishi, 4 Corners Fan, Muu, Azreous, pygalgia, jazzbo13, soco and Wailord.

On to tomorrow with Dan Haren taking the mound. We'll see if the umpiring crew bear any grudges...