Diamondbacks 11, Pirates 6: "Like Olsen, but with a tch instead of s"

Oh, ye of little faith. We had our first-even Australian-born player, Trent Oeltjen [see the title for our handy pronunciation guide], tie the game up with a home-run in his major-league debut - during our nemesis, the eighth inning, of course. We saw catcher Chris Snyder forced into service as our first-baseman, and Dan Haren used as a pinch-hitter. We tied a franchise record with 21 hits. So how could we not win? And so it proved: our closer didn't even get a save, because the Diamondbacks scored five runs in the 12th, giving us our best road winning streak in over two years.

In another step to respectability, it also means our run differential under AJ Hinch hits positive territory: with him at the helm, we've scored 391 runs, and conceded 387. Under Melvin, the same number was 105-127. That's another nail in the coffin of those who sought to bury AJ. Let's hear it for organizational advocacy! Yay! Yes:  just another night of Diamondbacks' baseball, folks... Details after the jump.

Oeltjen certainly made a good early impression in the major-leagues. By the middle of the second inning, he had already notched his first hit, stolen-base and outfield assist. By the end of the night, he had added a homer and another stolen-base - he is the first player since at least 1954 to have a multi-hit game, including a home-run, and steal two bases in his major-league debut. Memo to Trent: I know you spent eight years in the minors, but it's not really that easy. Honest! He and his accent also seemed to be a big hit with the SnakePit laideez, to the extent that I have just had to wash out the Gameday Thread with a fire-hose. :-)

Chris Snyder found himself on an unfamiliar side of home-plate, after Mark Reynolds was forced out of the game in the ninth, apparently when the ongoing issue with his thumb flared up - it doesn't appear to be anything significant. We already had a short bench, thanks to the departure of Ryan Robert to be with his wife and imminent baby [Dear Mrs. Roberts. Next time, please schedule childbirth for a day when we don't play extra innings. KTHXBAI], and Josh Whitesell had been used as a pinch-hitter in the eighth. So Snyder bravely took off the protective gear, and handled himself fairly credibly at the strange position, though didn't have too much to do.

Max Scherzer. Well, let's just say, you know it's a bad day when you find yourself looking forward to the opposition's eighth inning, on the basis that it can't possibly go any worse for Arizona than, oh, say their sixth. Scherzer's lack of control proved fatal, with a walk and a wild pitch proving instrumental in helping the Pirates score four times, our fragile one-run lead turning into a deficit while he only retired on batter. He wasn't helped by Gerardo Parra booting a ground-ball that helped a runner score from second - or, after Max was replaced by Juan Gutierrez, Miguel Montero space-shuttling a throw to third after a double ["air-mailing" doesn't do it justice].

Another error by Drew followed, and by the time the inning ended, the Pirates had scored four runs on three hits and a pair of Diamondbacks errors. Scherzer's line was distinctly unimpressive: 5.1 innings, giving up seven hits, with five runs all earned. It was probably the free passes which really hurt Max - three of the four walks which he issued, ended up coming round to score. That was where, with Arizona 6-3 down, 'Skins boldly predicted our defeat. While that might have been the case in April, this is your new, clearly vastly improved Diamondbacks. A Drew homer, Montero RBI groundout, and then Oeltjen's first-ever homer. Deficit? What deficit?

From there, maximum respect to the bullpen, who pitched 5.2 innings, allowing only one unearned run on four hits, two walks and six strikeouts. Particularly worthy of mention, Clay Zavada, who pitched two scoreless frames, and Jon Rauch, who got the win, battling back in the eleventh after putting the first two men aboard. That was likely the most dangerous point for Arizona, who had squandered a great chance of their own in the eleventh, when they had loaded the bases with one out. However, Montero struck out, completely unable to cope with a series of change-ups [sounded like there was some equipment abuse in the dugout as a result], and Tracy grounded out.

However, things went startlingly better for us in the twelfth. Again, we loaded the bases with one out. However, this time, Alex Romero made no mistake, doubling over the center-fielders head to score two runs. That brought Haren to the dish to hit for Rauch - the position players had all been used [and heaven knows what would have happened if Montero had been injured, our regular 'emergency catcher' being Roberts]. But he delivered, with a nice sacrifice-fly; Montero then followed with an RBI single, and an error brought home our fifth run. Leo Rosales pitched another 1-2-3 final inning, and victory was ours, once again.

As noted, the 21 hits tied the franchise record, going all the way back to April 13, 1999, when we beat the Dodgers 7-6 in 16 innings. [Quite the game that: it was tied 4-4 after fifteen, LA scored two in the top half, but we retaliated with three in the bottom, winning on a walkoff double by Dante Powell. Yeah. Who?] Obviously, buckets of offense to go around: Drew and Chad Tracy were the only starters not to have a multi-hit game. Romero and Parra enjoyed four hit nights, Reynolds and Augie Ojeda had three each, while Montero and Oeltjen got two apiece. 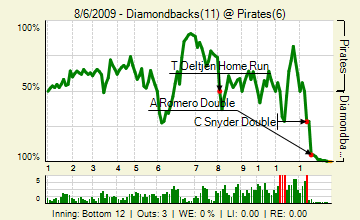 A monster Gameday Thread, almost reaching 1,100 comments - the biggest since Opening Day, I think. Again, we didn't dare start an overflow thread... kishi cracked 200, while 'Skins, 'charmer, rookie ZonaBacks10 [impressive!] and hotclaws all reached three figures. Also present: 4 Corners Fan, PhoenixFly, rapdawg, BleedingSedonaRed, britdback, IHateSouthBend, katers, mrssoco, luckycc, Wailord, venomfan, NotGuilty, sergey606, Muu and jazzbo13. A lot of fun. Just wish it had perhaps been on another night - y'know, when we hadn't scheduled a Bollywood movie, 'cos you know how long those are... Still, it's a price I'm happy to pay for the win. On to Washington!