Justin Upton Lands on the DL; Trent Oeltjen Called Up

Share All sharing options for: Justin Upton Lands on the DL; Trent Oeltjen Called Up

Breaking news from Twitter and confirmed by Nick Piecoro of the Arizona Republic - Justin Upton has been placed on the Disabled List with a right oblique strain. He aggravated the injury during Wednesday night's game in Pittsburgh. If you missed it, MLB.com has some video from last night's game, where Justin crumpled to the ground in obvious pain after a botched steal attempt. This is an issue that has been bothering him for a while, and is the same as the left oblique strain that caused him to miss 43 games last season. No word yet on how serious this injury is and how long he may be out, but the quick action of placing him on the DL indicates that this is no minor strain.

A little bit of background on Oeltjen, who was originally signed by the Twins in 2001 at the age of 18. He's originally from Australia, and played for them in both the 2006 and 2009 World Baseball Classics. He went hitless in six at-bats first time there, but was one of their outstanding performers at the start of this season, going 6-for-12 with a double and an RBI - he was also perfect in two steal attempts. He will also become the third man on the Arizona roster with an Olympic medal, having taken silver with the Australian team in 2004 (he joins Jon Rauch, who got a gold in 2000, and Augie Ojeda, who won bronze in 1996).

There's a nice interview with Oeltjen here. Though it dates from 2006, before he joined the Diamondbacks, it's still an interesting insight into playing baseball in a country not really known for it. I imagine he will also be signing up for Mark Grace's anti-maple bats campaign, having been hit in the eye by a splinter from a shattered bat, during batting practice in spring training. Oh, and all you social networking sluts will be interested to know like he might have a Facebook profile. That whizzing sounds you hear is 'Skins sending out a friend request. :-)

He spent the winter at home Down Under, playing for the NSW Patriots, who reached the finals of their baseball competition, before losing - that was Oeltjen-less, as he'd already left for Arizona and spring training. He went 9-for-22 (.227) there, before being reassigned to Reno. It's always nice to see a career minor-leaguer finally make it to the big show, and Oeltjen does seem to have what it takes - he has hit .283 or better at every level along the way. He trails only Rusty Ryal for HR and RBI on the Aces, and seems to have some wheels too - not just the 19 stolen-bases, but his fourteen triples leads the Pacific Coast League. Oh, and certain posters will be happy to hear that, going by this picture, he has no fear of the wall... 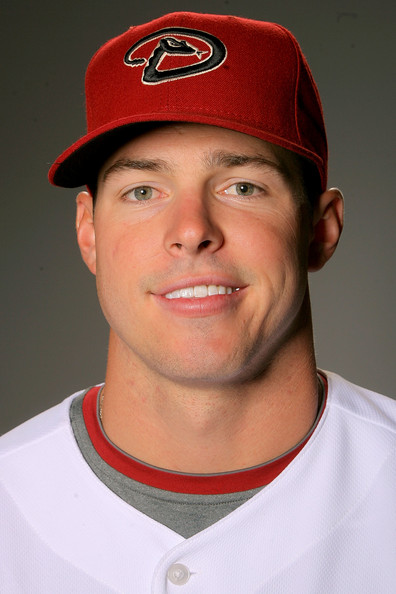