Diamondbacks 4, Pirates 3: Just How He Drew It Up

Share All sharing options for: Diamondbacks 4, Pirates 3: Just How He Drew It Up

Doug Davis! Ross Ohlendorf! It's the NBA Finals on NBC!

All right, so maybe it's hard to muster up enthusiasm for an August baseball game between two teams who are double digits under .500 -- especially when this exact pitching matchup happened less than two weeks ago. Then again, the Diamondbacks won that game handily, riding a solid start from Davis and more than enough offense for a win against the hapless Pirates. With all the ingredients in place, today's game took a slightly different path, and it brought back an old friend of ours: Santiago, the Can't-Deliver-With-RISP Gato. As Santiago would say, qué lástima. But unlike so many other games this year, the team finally delivered when it mattered and the game was saved.

The usual Double D magic tricks and sporadic offense after the jump...

Despite being a Doug Davis start, this contest went by pretty quickly. The first seven innings  were done in just over two hours. Those first 120 minutes or so weren't exactly fun to watch -- in a game where baserunners were hard to come by, you'd think the Diamondbacks would've wanted to capitalize on what few opportunities they got. Instead, they found themselves down 2-1 in the seventh against the mighty Pirates, who had a player who didn't appear in the big leagues last season in the cleanup spot. I'm sure Davis and his 5-10 record were thrilled. Let's do an inning-by-inning breakdown of Arizona's failings with runners in scoring position to sum up that futility before moving on to the good stuff:

1st: Gerardo Parra misses a homer by about 10 feet and motors into third with a one-out triple. Justin Upton hits a little flubber to first, and Mark Reynolds strikes out to end the inning.
2nd: Chad Tracy and Chris Young draw back-to-back walks with two out. Unfortunately, with Young squarely in the 8-hole where he belongs (assuming he has to be in the lineup at all), that meant Doug Davis was next up. Inning over.
3rd: Parra gets an infield hit with one out, and he steals third while Reynolds draws a walk, but Miguel Montero ends the inning with a groundout to the right side.
6th: After Ryan Roberts homers with two out, Tracy gets a base hit up the middle and Young coaxes a walk to put runners on first and second. Again. And that brings up Davis. Again. Inning over. Aga--
7th: Upton slaps a base knock to center with two out, and steals second easily while Reynolds falls into an 0-2 count. Special K does the latter part of his name and it kills the threat. 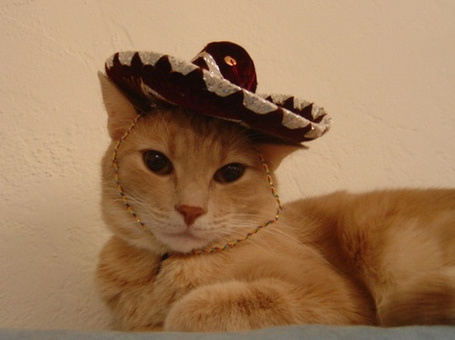 With all that precedence, Santiago was not ecstatic about our chances in this game, and it shows. I mean, look at that face. But the eighth inning made all that floundering easy to forget.

After a Montero groundout, Roberts put together a great at-bat, working the count full and eventually coaxing a walk. Tracy managed to reach on an error when Joel Hanrahan threw the ball away, and there were runners on first and second for the umpteenth time this game. Josh Whitesell pinch hit for Davis and advanced the runners with a grounder to the right side, and up came 0-for-4-to-that-point Stephen Drew. Having watched his team fail in its first seven attempts with RISP, Drew finally broke through, lacing a base hit up the middle that plated both Roberts and Tracy. Sure, he was thrown out trying to get to second, but the Diamondbacks had taken the lead.

Through it all, Davis was performing his standard Houdini act, cruising through seven innings and making it look almost effortless. He got better as the game went along, allowing only one baserunner in his final three frames, and was pulled with just 81 pitches when Arizona was threatening in the top of the eighth. The only blemish was a two-run shot by Andy "Finally I'm the Only A. LaRoche on This Team" LaRoche, which he hit right after a Steve Pearce walk. Otherwise, Davis allowed just four other men on base, and he erased Lastings Milledge with a beauty of a pickoff move to eliminate that threat rather quickly. All in all, Davis' line was certainly deserving of a win (like so many of his other starts this season): 7 IP, 4 H, 2 ER, 2 BB, 5 K. He lowered his ERA to 3.67 in the process.

Jon Rauch pitched a heart-attack-free scoreless eighth, which brought Chad Qualls in for a two-run save situation, a margin he ended up desperately needing. He gave up a solo shot with one out in the inning, but got a groundout and a punchout to end the game and pick up his 21st save on the season. Just like that, we picked up our fifth win in six games on this road trip (granted, the competition hasn't exactly been top-tier) and Santiago left to nap quietly in a windowsill.

There's one other big issue that warrants mentioning: in the ninth, Upton reached on another base hit and tried to steal second on a 1-1 pitch, only to get thrown out, and worse, clutching his right side. After the game, the injury was classified as a right oblique strain, an injury Justin has battled before (last season). Whether that means a stay on the DL is forthcoming or just a day-to-day watch remains to be seen. Let's hope for the best. 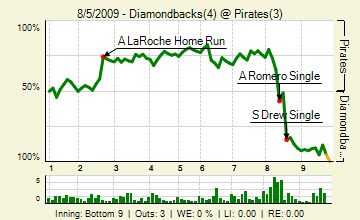 For the Diamondbacks, Parra and Upton each had a pair of hits. Roberts had his fifth home run of the season and drew a couple of walks; Young lowered his average to .195, but reached twice on base on balls; and Tracy got on base twice thanks to a hit and a walk. LaRoche was the only Pirate to reach more than once (2 H/1 BB).

Tomorrow, the Diamondbacks look to wrap up a series sweep with Max Scherzer on the mound, hopefully in line for a performance better than his past couple starts. After that it's a weekend series against the Natinals. At the very least, we'll have a .500 record on the road trip, but it doesn't seem unreasonable to hope for better than that.