Yusmeiro Petit made almost certainly the most unexpected run at a no-hitter in Diamondbacks' franchise history. He didn't allow a hit through the front seven innings until it was broken up by a clean single to left-field by Pirates' short-stop  Ronnie Cedeno, with no outs in the eighth. Petit finished with eight shutout innings, allowing only that one hit, and three walks. Petit extended his own scoreless streak to fourteen frames, and Leo Rosales completed the shutout - our third straight over the Pirates.

No, really. Where is Yusmeiro Petit, and what have you done with him? This is a pitcher written off by people much more knowledgable than me. Less that two weeks ago, Nick Piecoro wrote, "The Diamondbacks have to try someone else. It isn't fair to others in the organization for Petit to continue to get starts." Or as someone else said, "He has very mediocre velocity, and really has no special movement. He is a bit of a short armer, and can deceive certain guys with his delivery, until they see him a couple times. He isn't going to gain any velocity, and he just doesn't have the stuff to make hitters miss... The results he has gotten so far in his career are already quite damning, and it's only going to get worse."

Frankly, the wretched results this season had me thoroughly convinced: Petit sucked. But that's now back-to-back scoreless outings - something Dan Haren hasn't managed this season, nor Brandon Webb last year either. 14 zeroes in a row posted by Petit, and only five hits (four of them singles) over that time. By some measures, it's the best consecutive pair of outings by any Diamondbacks starting pitcher, since Andy Benes had eight-inning shutouts with one and three hits, at the end of 1998. Even Randy had back-to-back games with no runs allowed, only twice in his time with the franchise - and there, he allowed eleven hits in 14 innings, and 14 in 17 innings.

The question would have to be, has he changed something? For the results are so startlingly different, that it hardly seems credible that blind luck can be blamed. I really hope one of the journalists asks Petit about that. Perhaps he has tweaked his mechanics in some way, because while he is still a fly-ball prone pitcher - 14 of 20 outs tonight came in the air - they haven't left the yard, and it didn't even seem like there were very many hard-hit balls to the outfield. Whatever it is, let's hope it continues: Petit went beyond seven innings for the very first time in his career.

The 108 pitches thrown was also the first time he reached three figures, and he was clearly gassed by the end - the last out of the seventh saw him struggling, and fumes were all he had left in the eighth. He may have got the first out, a borderline pitch that could have been strike three as much as it was actually called ball four. But the next batter ended the bid, sending a change-up to left-center - I think the first time any Diamondbacks has taken a no-hitter so deep since Randy Johnson's perfect game in 2004. Petit got the next three batters, and was applauded by an appreciable number of the PNC crowd as he left the mound.

Not far behind Petit in the line of unexpected performances was Ryan Roberts. He had just one home-run in his first seventy-three career games, but he smacked two out of the ballpark tonight, giving him four in his last ten appearances. He ended the night with four hits and is certainly making a credible case to be the starting second-baseman in 2010, if nothing better shows up, or at least a utility role. Mark Reynolds was kept in the park, but still got three hits, while Chris Young reached safely three times on two walks and his seventh homer - a long time since the last one [June 13th, to be exact].

Two-run homers from Young and Roberts broke open the game in the fourth, turning a one-run lead into a 5-0 score, and while the Petit Unit was cruising, the team never loked back. After he left, Leo Rosales retired the Pirates 1-2-3 in the ninth, extending our scoreless streak against Pittsburgh to 28 innings [which explains hotclaws' macro in the comments!]. Three wins in a row and the second W in a row by the Diamondbacks' #5 starter, runs the team record to 17-10 since July 4th. That's definitely the best streak of the season - indeed, before then, we only had one winning record over any 27-game period, going 14-13 from May 16 through June 13. 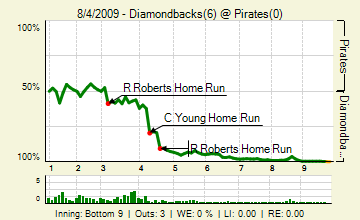 I think we'll sleep well tonight, having run our record on this road-trip to 4-1. Doug Davis takes the mound tomorrow, and it'd be a good result to take the win and guarantee another series victory away from Chase. Our road record is 24-26, which is pretty good - it's been the home one which has killed us.