Share All sharing options for: Diamondbacks 4, Astros 3: Qualls For Concern

While there were no double-digit runs or even free tacos to be had at Chase Field this afternoon, the Diamondbacks still completed the sweep with a 4-3 victory over the Astros, giving Dan Haren his 13th victory of the season. However, it proved something of a Pyrrhic victory, as the final pitch of the game was lined off Chad Qualls to Stephen Drew for the out - Qualls went down awkwardly, and appeared to turn his leg awkwardly in the process. He was helped off the field, leaning on two team-mates; the first report say it's a dislocated kneecap, so I'm thinking that's a DL trip, and quite possibly the end of his season.

It was definitely one of the weirder, more uncomfortable moments of the season, hearing D-backs Swing ring out around the stadium, as our closer was tended to on the mound, in obvious pain. I kinda think they should have held off on that until at least he was being taken from the park. Still, I guess there's no guidelines on that kind of thing.

More thoughts on the four-game sweep, and a rare victory over a left-handed pitcher, after the break... Er, make that, after the jump. :-(

The speed of the Astros' leadoff batter bit Arizona and Dan Haren; the lead-off walk came around to score, stealing second and then taking third and home on a pair of groundouts. Still, Haren was in control: thanks to a convenient lined double-play, he faced only one batter over the minimum from that leadoff walk through the start of the seventh inning. None of the Houston batters got past first base, until Haren tired in the seventh. Then, he escaped the most dangerous jam of the game, with the bases loaded and only one out. However, a pop-out to the shallow outfield and a flyout to left allowed him to escape without damage.

I must admit, I was a little surprised to see him hit for himself in the bottom of the inning, even though he singled, and then come out to the mound again in the eighth. The general GDT consensus was that, at only 97 pitches, he'd be good or another frame, though that was before he spend 20 minutes standing on-base, as the Astros went through four pitchers that inning.  A pair of singles put the men on the corners with no-one out in the eighth, and with the tying run at the plate, manager AJ Hinch went to the bullpen. Haren's final line was three runs, all earned in seven innings, on six hits and two walks, though some of the blame there can be alloted to Juan Gutierrez.

That's because he clearly gave the impression that he wasn't going to worry about inherited runners, and the man on first stole second on the first pitch. Two more groundouts scored both men: A subsequent single, stolen-base and wild pitch put the tying run on third, and in came Chad Qualls for a four-out save situation - which worked so well, the last time we tried it. This time, however, he got it done, albeit at a heavy price. Hinch said afterwards that assistant trainer Dave Edwards, put the knee back into place - it's now more a question of waiting to see what other damage was done.

The Arizona offense struggled against Rodriguez to almost the same extent, with three singles the only hits we managed in our first twenty plate-appearances. Fortunately, one of them was an RBI single from Ryan Roberts in the third, scoring John Hester - in his first start, our newest catcher went 2-for-3 with a double, an RBI and two runs scored. That kept the Diamondbacks in the game while Haren kept Houston at bay, and Justin Upton gave Arizona the lead with his 22nd home-run of the year, a blast off the batter's eye to lead off the sixth. [I claim full credit for this, as it appeared mere moments after my arrival in the thread.]

We added what turned out to be a pair of vital insurance runs in the seventh, though probably should have had more. After Hester's RBI double, we then loaded the bases with no-one out, but all the Arizona hitters could manage was an RBI groundout by Upton, on a chopper high off the plate. In the end, it proved the deciding factor. The Diamondbacks had only seven hits, two by Hester; Roberts did reach safely three times, just what you want in the leadoff spot, on a hit and two walks, while Haren helped himself out with a single and a walk. However, Chris Young was 0-for-3 again, and also missed the cutoff man in the seventh, which could have proved costly. 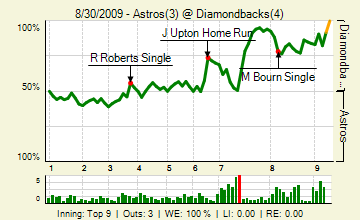 A couple of new [or, at least, not regular] faces in the Gameday Thread, so welcome to NASCARbernet, justin1985, Prosopis and mfan2010. kishi led the way, comment-wise, with pygalgia runner-up: also present, hotclaws, mrssoco, Wailord, DbacksSkins, unnamedDBacksfan, katers, Sprankton, emilylovesthedbacks and haas, as we went just over the four hundred mark. Nice to complete the first sweep in front of our home fans since doing so to the Padres in early July. Now, it's back on to the road again, for a four-game series against the Dodgers. Here's to us playing spoiler.