I'd like to thank the Mets management for starting Nelson Figueroa in tonight's game against the Diamondbacks. The ten hits and six runs charged to him in 1.2 innings was extremely generous, and provided just enough cushion for Arizona to win, taking three out of four in the Big Apple. The kindness of our hosts in providing such an eminently hittable pitcher for us to warm up against, was deeply appreciated.

Not least by Mark Reynolds who, on his 26th birthday went deep twice off Figueroa. That gave him four homers this series, eight in 16 games since the All-Star break, and puts him on page for 49 homers by the end of the season. After Figueroa was lifted, things became a lot more nervous, and Arizona had to get the last twelve outs with a one-run lead. However, Dan Haren, Jon Rauch and Chad Qualls did the needful, and we held on. Details, after the jump.

You can't complain about the offense when free tacos have been reached by the middle of the second inning. Or when five Diamondbacks have already got themselves multi-hit nights by one out into the third inning. However, one might have to ask how much of it was connected directly to Figueroa. For, after looking like the Bronx Bombers on meth for the first five outs - we were 10-for-15 with a walk against him - the Mets bullpen then pitched 7.1 shutout innings, giving up three hits, two walks and talking only 91 pitches.

Let's draw a veil over that, however, and concentrate on the first two frames, the DIamondbacks scoring three times in each. In the first inning, Gerardo Parra singled home Drew, and we then got back-to-back homers from Miguel Montero and Reynolds - it's always nice to score more than than we have made outs, and it would have been more had Parra not been caught stealing second. The pattern continued in the second: Justin Upton had an RBI single and Reynolds then deposited his second pitch of the night into the bleachers, this time the opposite way. 6-0 Arizona with only five outs made by us. Thank you for playing, Figueroa, and enjoy the bus back to Triple-A.

Parra reached safely four times, on three hits and a walk; Ryan Roberts had three hits; Reynolds, Montero and Stephen Drew each had a couple of hits, and Whitesell walked twice. The only batter not to join in the fun at all was Chris Young, who was 0-for-4, and his average has dipped down to .195, the lowest it has been since June 17th. [and Young hasn't homered since before that point] He is 4-for-30 since the start of the last home-stand, with ten strikeouts. It's getting harder to justify his presence in the lineup, and Parra is looking more and more likely to be our starting CF in 2010.

Another worrying outing for Dan Haren: while he got the win, this was much more the result of our early offensive onslaught than his own performance. It was the first time this year, any of our starting pitchers have got the W without giving us a quality start. Which is fair enough - in his six defeats, the Diamondbacks scored a total of six runs for him. But his line since the All-Star Break is kinda worrying:
Haren: 25 IP, 24 H, 7 BB, 20 K, 12 ER, 4.32 ERA
It was a tough night to be pitching, that's for sure. Haren was drenched with sweat through the fifth and despite pouring in the first-pitch strikes (22 of 29, 76% - league average is 58%), only got three K's - his lowest total since April 12th.

The Mets chipped away at the lead, scoring single runs in the third and sixth, but it was the three-run fifth where they did most of their damage. They didn't necessarily hit Haren that hard - all four hits were singles, but with a walk were enough to make a game of it, and it took a convenient double-play ball from Gary Sheffied to get Haren out of the frame. I was somewhat surprised to see him out there again for the sixth, and a lead-off homer resulted, but he settled down, retiring the next six Mets batters.

Having thrown only 92 pitches, there was some thought given to sending him out for the eighth, but Hinch - after some discussion, not least with Haren himself in the clubhouse tunnel - opted to go to the bullpen. Haren's final line: seven innings, eight hits and a walk, with five runs, all earned. There was a nervous moment in the eighth, after Rauch allowed a one-out double, but the runner was stranded there, and Qualls pitched an impeccable 1-2-3 ninth, notching his twentieth save of the year. 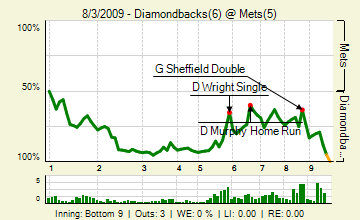 Rather more nervewracking than we thought it'd be - our Win Percentage reached 92.9% in the second-inning, but drifted steadily back towards the Mets, dropping as low as 60% in the sixth when the home-team homer made it a one-run game. The Gameday Thread was understandably nervous as a result, but ended at 380 posts: 'Skins broke three figures, kishi pipping hotclaws by a single comment, 77-76. Also taking part: Turambar, sergey606, sayheyupton, snakecharmer, Clefo, IHateSouthBend, soco, rapdawg, Wailord, Muu, TwinnerA, SeanMillerSavior (skating on very thin ice, I have to say, and has been officially warned), njjohn and 4 Corners Fan.

Three wins in a four-game series on the road, is a great way to start August, and we now head off to Pittsburgh for a three-game series there. The back-end of our rotation will be seen there, but the way our offense - ok, the offense named "Mark" - has been hitting, I am hopeful we can take two of three.

Other news, and we'll start with good news on the Brandon Webb front. His surgery was success and revealed no major damage such as tears to his labrum. Instead, they did what is known as labral debridement - see our earlier article for more info on this procedure, but it's basically like tidying up the loose ends in there. The doctor apparently told Webb, 'It's like getting gravel out of your shoe." The goo news is, that's it's a lot less invasive, than had there been a tear to be repaired. Rather than a year, recovery time is estimated at 3-4 months, and he should be ready to go by Spring Training. However, the question of the team's 2010 option obviously remains uncertain at this point.

Daniel Cabrera has indeed been signed by the Diamondbacks, getting a minor-league contract which will see him report to Reno, until he can be stretched out to 90-95 pitches. That's not going to be until late in this month, so I have to think that it's being done with an eye to 2010 more than this season. And finally, Nick Piecoro describes an attack on the team by a pack of rabid squirrels this afternoon. Ok, less "a pack" than "one", and it wasn't so much "rabid" as highly-agitated, but still. As Nick puts it, "The Mets apparently have traded the rats of Shea Stadium for squirrels at Citi Field."