On Gonzo Appreciation Night, on the game of the 2nd Annual SnakepitFestPaloozaThon, the Arizona Diamondbacks won in resounding fashion. The Diamondbacks' offense, which was absent the entire road trip, broke out again today for 9 runs - more free tacos tomorrow! - for the second straight night against the Houston Astros. Only 9 runs, guys? You couldn't even hit double digits?? Pbbt.

Big nights from a lot of the usual big players - Justin Upton was 3 for 4, Mark Reynolds hit home run # 40, and Miguel Montero had a big 3-run double to break the game open. Oh yeah and Jon Garland pitched 7 scoreless innings! More details to come in the recap by Jim when he gets home, after surely celebrating a big win. (Think he brought the techno music in the car?)

Well, that kicked ass in more ways than can possibly be listed. And you thought SnakePitFest 1 was good, with the Petit Unit leading us to a 7-1 win over the Marlins? This time, Jon Garland, Clay Zavada (with help from the massed forces of the Zavada Brigade) and Blaine Boyer combined for a seven-hit shutout, Mark Reynolds smashed his fortieth homer of the season, and Arizona rolled to another easy win. That's now 34 runs since Thursday - only once in franchise history has that total been bettered over three games [Sept. 27-29, 2002, when we totalled 36].

However, let's start at the beginning, with the gathering at Sliders, where tickets were handed out to those who arrived. I got there about 3:45, having gone through the park on my way from work, and collected my Gonzo T-shirt on the way. There, we met with friends old and new - finally getting to put a face to edbighead, sporting a cool D-backs tattoo - and handed out the flair provided by Mrs. SnakePit, each attendee getting a fan, packet of Big League Chew and a stylish Clay Zavada-inspired 'tache. 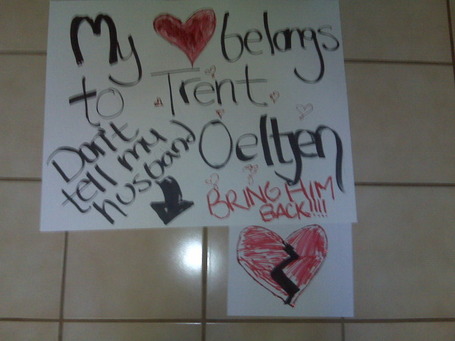 Next time, we will fax Mrs. Soco's sign to the D-backs in advance,
ensuring it is not derailed by roster moves.

In what can only be described as a miracle, everyone who had to collect tickets had shown up with about thirty minutes to spare, so we made a dash for the blessed coolness of Chase Field. We were in time to see the video tribute to Luis Gonzalez, which included clips from his press conference, where the emotion on view definitely brought a lump to my throat, and highlights from his career. No matter how often I see the ninth inning of Game Seven, I am still convinced we are going to lose...

After a scoreless first inning, Arizona got on the board in the second, courtesy of what can only be described as a gift-wrapped run. With men on second and third, the Astros starter opted to walk Brandon Allen intentionally, to reach the pitcher's spot. However, ball one sailed to the backstop, allowing Miguel Montero to scamper home from third. The margin became a great deal more comfortable in the next inning, the Diamondbacks scoring four times. Ryan Roberts tripled, scoring Stephen Drew, who'd walked; a Justin Upton single scored Roberts; and then Mark uncorked #40, a towering bomb just fair down the left-field line into the second deck, estimated at 439 feet. He's one behind Pujols again for the major-league lead. 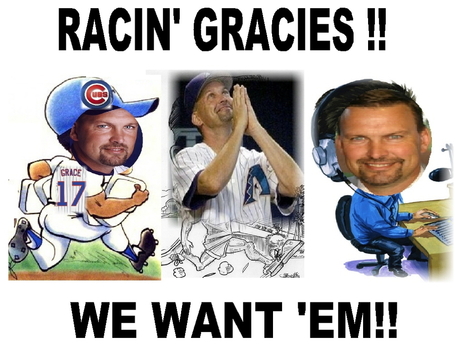 That made the score 5-0 to Arizona, but why stop there? Tacos arrived shortly afterwards, Upton delivering them with his 21st home-run, and Miguel Montero drove in three more with a bases-clearing double in the seventh. That gives him 50 RBI for the season, third on the all-time list for Arizona catchers, behind Chris Snyder last year (64) and Johnny Estrada's 71 in 2006. It'd have been nice to get double-figures again, but Montero was stranded at third, so we fell 90 feet short. Despite the nine runs, we only had eight hits; Upton got three of those, while Roberts had two, and Drew + Montero each had a hit and a walk.

Meanwhile, Jon Garland was running like a well-oiled machine - he allowed only five hits and one walk in his seven innings, while the Astros didn't get a man past second-base for the entire game. It was a little hard to tell from our seats exactly how he was doing it, but you couln't argue with the results at all, and it's good to see his record now making its way to 8-11. Clay Zavada came in for the eighth, and there were some nervous moments as he allowed two hits [as you'll see below, we had pinned our colors to his mast!], but escaped the eighth, and Blaine Boyer retired the Astros 1-2-3 in the ninth to seal another excellent victory.

Meanwhile, in the stands... 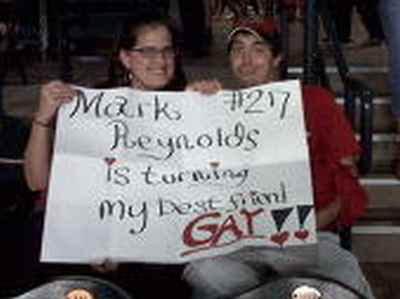 Not that there's anything wrong with that, katers would like to stress...

We were certainly The Loud Section: there's nothing quite like watching the game with others who are just as passionate about the team, and have no problem showing it. The Zavadataches were a big hit, though it has to be said, their adhesive properties left a little to be desired [with hindsight, I should probably have shaved my stubble too, as that didn't help!]. High-fives were exchanged as the game progressed and the Diamondbacks continued to add to their tally, and I even felt secure enough in the lead to go get Mrs. SnakePit an ice-cream.

What? We were on TV? Who, us? I must actually admit that 21st technology was involved, the D-backs booth tweet telling us to get ready was picked up by kishi, who alerted me and the word was quickly spread. Mustaches were attached and the arrival of our favorite reliever was greeted with a roar of approval from our section. Unfortunately, both myself and Mrs. SnakePit forgot to Tivo the event, so we'll be awaiting screen-grabs from 'charmer, and a chance to review the event at SocoFest in three weeks. I'm sure we looked like total idiots! 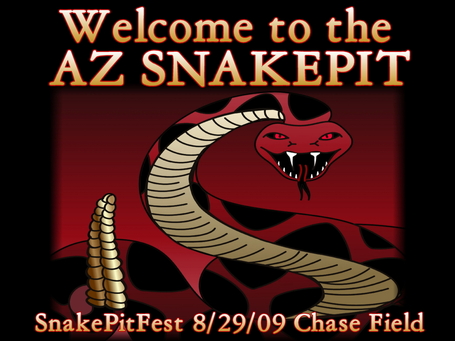 We were also honored by a visit from team president Derrick Hall, who swung by to say hello to the Loud Section. He swiftly promised mrssoco that Trent Oeltjen would be returning to the team before long - he'd obviously heard the tales of her wrath, television sets getting hurled across the room, etc. -  and discussed possible configurations for the Racing Gracies - let's say, it might not just be Grace...  But pity poor FourCornersFan, who left us in the middle of the eighth, having bemoaned the absense of favorite Augie Ojeda, and so missed his pinch-hit appearance in the bottom of the inning!

Still, it was a marvellous time, and many thanks to everyone who turned up and helped make it so - especial thanks to Mrs. SnakePit for providing the swag, and holding the fort at Sliders until I got there. But it was definitely the kind of day that re-affirmed my fandom - the team stepped up and did its part, with a performance that sealed it as the most enjoyable game of the year. We didn't have our camera, but I'm sure other people did, so please feel free to post your pics in the comments. 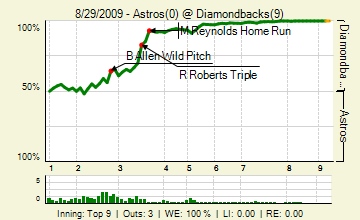 Needless to say, with most of the usual suspects actually present at the game, it was a somewhat quiet Gameday Thread, though there was still some rather interesting conversations. It gave some new faces a change to shine, and so wailord came out on top, with pygalgia in second, and muu + 'charmer shared third place. Also present: IHateSouthBend, soco, unnamedDBacksfan, mrssoco, Diamondhacks, Azreous, hotclaws, katers, Fiona, eel, GuruB, kishi, ZonaBacks10 and 4 Corners Fan.

Audio clippage of manager AJ Hinch discussing sending Chris Snyder to the DL, whether today's outfield might be the standard one in 2010, and we've also got the Gonzo press conference, emotion and all. For more on Luis, there's a good article by Scott Bordow in the Tribune: Valley welcomes Gonzo back. I also liked Reynolds' post-game comments: "I'm humbled to be in the situation I'm in. Gonzo did a lot of great things for this organization, for this team, and I can only hope to follow in his footsteps and bring a World Series here and do all the great things he did... I just go out there every day and sharpen my cleats and I'm just able to hit a home run every now and then."

I am now off to bed, pausing only for a shower - it seemed quite sticky in the park today for some reason, and I feel rather grungy. There will then be sleep and a long lie-in tomorrow. Fortunately, 'Skins is on the recap!