The Diamondbacks had their biggest offensive night at Chase in almost six years, highlighted by a seven-run third inning, their biggest single frame this campaign. We scored as many runs there, before making an out, as over the entire Phillies series plus the first two games in Houston. This proved enough to overcome another wobbly outing by Max Scherzer, who allowed six runs, yet still got the W - the first Arizona starter to do that in more than three seasons. Doug Davis could be seen in the dugout, wondering whether some kind of iris transplant would help his W-L record.

Oh, and John Hester became the second Diamondback player this season to hit a home-run in his first major-league at bat. That's more than the other 29 major-league teams have managed between them.

Obviously, this means the team will score 17 times tomorrow night at SnakePitFest. Arguments against this view can be placed after the jump.

Yeah, that was fun. The last time this team put so many runs up on the board, was July 31, 2006 in a severely wind-assisted game at Wrigley, which we won 15-4, behind a team-record six home-run barrage. The game before that - and the last time we did it at Chase - was all the way back in September 2003, when we blasted the Rockies 16-6. The 25 total runs scored last night and this, are the most in back-to-back games for Arizona since the last couple of contests in 2002, mauling Colorado 17-8 and 11-8.

But it didn't look very promising to start with. Scherzer was in trouble from the get-go, walking both of the first hitters he faced and only getting the first out when Berkman tried to turn his two-run double into a triple. Fortunately, he settled down, and the Diamondbacks bounced right back, their first four batters reaching, including a bases-loaded walk to Mark Reynolds. A double-play by Miguel Montero leveled the score, and in the second, Stephen Drew gave us the lead with an RBI single.

His credit for that was wiped off the board immediately, as the first of his two errors allowed the pitcher to reach, and Scherzer then allowed a homer to give Houston a 4-3 lead. Oh-oh... I think we were all shifting nervously in our seats at this point - but it's surprising how comforting it is, when your next seven batters the next time up all, not only reach base, they also get to trot across home-plate. Reynolds had an RBI single; Montero an RBI double; Gerardo Parra a two-run double; and Alex Romero capped things off with his first home-run of the year, a three-run shot into the pool.

Keep scoring? Oh, go on then - if you insist. Stephen Drew legged out an infield single to score another in the fifth - that was #11 if you're counting them. Montero then got just enough on a pitch, leading off the sixth, to get it just into the bleachers, for his twelfth home-run of the year. And the newest Diamondback, John Hester, was called upon to pinch-hit for Scherzer later in the inning, and promptly cranked a pitch off the batter's eye in straightaway center for a two-run homer - and that was the first time he had stood at the plate as a major-leaguer.

Brandon Allen made a great home debut, reaching safely four times on three hits and a walk, while Drew, Ryan Roberts and Upton each had two hits and a walk,  Montero a pair of hits, and Reynolds a hit and a walk. The final tally: 14 runs on 16 hits - between last night and this, we're hitting 31-for-79, a .392 clip with five home-runs. I don't think it's any coincidence at all, that these two games are the first in quite some time where we've been able to see both Upton and Reynolds in the same line-up.

Scherzer was hardly dominating, despite striking out eight in his six innings. All five hits he allowed went for extra-bases, and one senses again he is definitely tired beyond his raw season numbers. Still, he got the W, the first Arizona starter since Miguel Batista in June 2006 to do so when allowing six runs or more. Leo Rosales allowed one run in his two innings of work, and Juan Gutierrez mopped the ninth in short order, allowing a hit and retiring three batters on only ten pitches. 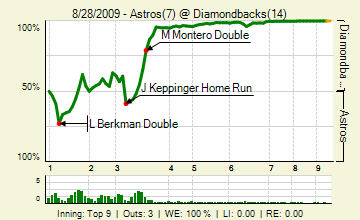 And, after a somewhat wobbly start, this is pretty close to as perfect a home Fangraph as you could want to see, red-lining by the end of the third. 'Skins led the way in the comment thread, with Kishi posting about half his total, and hotclaws returning around half of his in turn. Also present: snakecharmer, 4 Corners Fan, katers, AJforAZ, Wailord, BattleMoses, soco, emilylovesthedbacks, piratedan7, Diamondhacks, Muu, PioneerSkies, mrssoco, njjohn and Sprankton. Though the last-named was present only at SnakePit Towers where he popped round with his missus to pick up his ticket for SnakePitFest tomorrow.

I was kinda hoping the Cardinals would get hammered tonight, so I could roll out numbers on the last time they and the Diamondbacks played on the same day, and the baseball team scored more [dunno about pres-season games, but on September 14, 2003, the Cardinals were shutout by the Seahawks and the Diamondbacks blanked the Rockies, 5-0]. Still, a more than satisfactory victory, and one that really gets my appetite up for SnakePitFest. Part of me thinks this team has now used up all their offense for the week, but I've little doubt that the joint will be jumping, with a near-full house and the team is bound to respond. Should be a lot of fun, either way.