Diamondbacks 11, Giants 0: "These go to eleven"

Share All sharing options for: Diamondbacks 11, Giants 0: "These go to eleven"

Things we need to do to beat the Giants:
a) Keep 'charmer away from the park.
b) Get Victor F to post a picture of a broom.
c) Do the recap myself.

Oh, yeah: it helps when we score double-figure runs and get six shutout innings from Yusmeiro Petit.  That perhaps assisted a little bit. Mark Reynolds sent his 39th ball out of the field  [clearly feeling better!] and Brandon Allen joined in with his first career homer, a three-run shot, later the same inning. Just a shame his family weren't there for this one, though his younger sister would likely have exploded.

The offensive avalanche rendered the eighth-inning meltdown largely irrelevant. Naturally, this meant we got a 1-2-3 frame. Details after the jump-shaped thing.

The highlight of the fifth inning, however, was neither long ball. It was Yusmeiro Petit's 50-foot infield squib, his first knock in over two years. The last was July 27, 2007, since when he had been 0-for-43, going without a hit in 28 consecutive games where he came to the plate. There's been only one longer streak by a player in the majors over the past decade - Kaz Ishii went 29 games hitless in 2002-03. Hard to say who was more surprised or delighted: Petit or his team-mates. Mind you, when first-base coach Lorenzo Bundy collected the batting glove, he was clearly asking Yusmeiro, "And who are you?"

More importantly, Petit went six innings, allowing no runs on four hits and two walks, another very solid outing. They were saying on the broadcast that Mel Stottlemyre has been working with Petit and trying to get him to put more spin on his pitches. Whatever they're doing, it certainly seems to be working more often than not of late: in his past six starts and 34 innings, Petit has a 2.91 ERA, and has allowed only four home-runs. I think he'd be half a fine #5 starter - maybe we can just use Billy Buckner for the starts at Chase.

Meanwhile, the ofense was doing nicely, thank you very much - as opposed to last night, where they seemed to think they only needed to get to third-base. We played small ball in the opening inning, putting three on the board courtesy of RBI hits by Reynolds and Miguel Montero, and a sacrifice-fly from Gerardo Parra. Stephen Drew got his ninth triple of the year in the next frame, driving in another run, and then there was the two homers hit in the fifth. Mark's was another no doubter, maybe 440 ft or so to left-center, and Allen's three-run blast was almost as far, over the high wall in right-center, conveniently rebounding on to the field for collection and safe-keeping.

But, wait! There's more! An RBI double by Justin Upton in the sixth [he completely *scorched* both of his two hits today, serious lasers each of them] made it 9-0, and back-to-back doubles by Parra and Allen then drove in two more runs, to give us the final margin of victory. There hasn't been a more convincing shutout of the Giants in their own park since 1980 [the 11-0 score has been equalled twice since, in 1997 and 2004]. If the first couple of games were disappointing - as, indeed, was much of this road-trip - this was a good way to end it, with an emphatic win.

Final hit total = 14, with solid clutch performance too [5-for-14 with men in scoring position]. Montero had two hits and a walk, while Parra continued to blister right-handed pitching, getting three hits. Upton, Reynolds and Allen each got a pair of knocks, Allen driving in four runs. Late-inning defensive replacement Augie Ojeda managed to get charged with two errors in four innings, though was unlucky on the second. A line-drive pinged off the ass of Esmerling Vasquez and ricocheted into the air, where Ojeda snared it with a diving grab. However, he then threw the ball away, trying to get the runner scampering back to first.

The bullpen came in after Petit had gone six innings on 90 pitches, and gave us three shutout innings. Yeah, I know - just when we needed it least. Still, Vasquez, Clay Zavada and Blaine Boyer combined to allow only one base-runner, a single in the seventh, and Vasquez stranded that man at third after he reached there with one out. That was the closest the Giants came to scoring, though Petit left them loaded in the fourth, striking out Aaron Roward on three straight pitches, when the score was only 4-0. 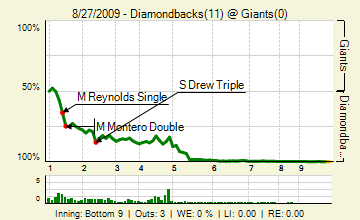 That might just be the closest we've come to having no-one in negative territory. Petit at the plate was the only other participant with a minus before his mark, getting -2.7% for his hitting, but that is certainly canceled by his hitting. This is exactly the shape of Fangraph we want to see on the road: trending steeply down early and the opposition basically flat-lined for the entire second-half of the game.

Little wonder the Gameday Thread...drifted. 'Skins led the way, with 'charmer Week continuing, as she almost reached three figures too - kishi completed a good active night for the mods in third. Also present: BattleMoses, luckycc, Wailord, hotclaws, pygalgia, piratedan7, kishi, mrssoco, edbigghead, Muu, Clefo, venomfan, katers, asteroid, soco and jonny-yuma, so thanks to them all for the enjoyable chat.

Back home to Arizona for our Diamondbacks and a three-game series against the Astros, highlighted, of course, by SnakePitFest on Saturday. I trust everyone is working on their signs for that.