Tonight, the Diamondbacks faced a lofty task: finding a way to beat the best pitcher in major-league history. That's right, the D-backs were up against Jonathan Sanchez, a first-ballot hall-of-famer with a heart of gold, and had to rely on lowly Doug Davis to get the job done.

The word for the games I recap is usually "interesting." Granted, interesting is such a generic adjective that it's hard not to find a way for every game to fit it somehow, but this was a prime example of legitimate "interesting." As in, it's interesting how we managed to blow a three-run lead late and lose another one-run decision.

An attempt to differentiate this loss from all the others after the jump...

This was one of those games that the 2007 team would have won somehow. Maybe this team isn't that much worse than that one, and luck played a bigger factor than we'll ever know. It doesn't really matter, though, because the bottom line is Doug Davis came up short of a victory (despite a quality start) for what seems like the 40th time this season. And he doesn't even have that many starts.

To think, it started so well. Sanchez started the game off against Ryan Roberts, and threw him two fastballs to get ahead 0-2 quickly. He got a little bit too cute with the third delivery though, and Roberts yanked a home run to left that put Arizona up 1-0 early. The rest of the inning was a series of misadventures on both sides -- Eli Whiteside had two errors, the Diamondbacks got four outs, etc. -- but nothing came of it.

The D-backs threatened again early in the second. Rusty Ryal and Gerardo Parra opened the inning with back-to-back singles. Alex Romero beat out a grounder to avoid the double play, leaving a runner at third and only one out...but Davis was up next. Roberts ended the inning with a groundout of his own. In the third, Justin Upton (making his first start back with the big league club) cranked a two-out double, but was left stranded.

From there, Sanchez locked in for the next couple innings, setting down the side in order in the fourth and fifth. In the sixth, though, the Diamondbacks must've appealed to the correct baseball gods, because they were permitted to score a couple more runs against the San Francisco great. Upton drew a one-out walk and moved to second on a wild pitch. After a Miguel Montero strikeout, Sanchez intentionally walked Ryal to get to Parra, who faced a conundrum: he's been great with runners in scoring position, but struggled mightily against lefties. For the second time, though, he was successful against Sanchez, lining an opposite-field single to make it 2-0. Romero followed with a base hit of his own to drive in Ryal, and both runners moved over on the throw in. But that left two men in scoring position for Doug Davis, and...well.

Unfortunately, that was the end of the offense for the night, as the Diamondbacks once again seemed pacified by a decent-sized lead. Only one Arizona player reached base in the final three innings (a single by Montero in the eighth), and as we'll get to in a moment, that simply wasn't getting the job done.

One has to wonder if Doug Davis is reconsidering his potential future in Arizona. Once again, he pitched a great game, working around his usual handful of baserunners and lulling viewers to sleep with his slow pace, yet came away with a no-decision. Going into the eighth, Davis was working on a four-hitter (along with three walks), but somewhere between the second and third out of the inning, things went horribly wrong.

Davis started out very strong, setting down the side in order in the first and getting a quick double play after a walk in the second. He left runners on the corners in the third, but cruised through the middle frames (just one batter over the minimum on a walk). In the seventh, Davis lost hold of the shutout thanks to the second home run of the series by Juan Uribe (yes, he of the .682 OPS in 2008), a solo shot that made it 3-1. But then that dastardly eighth inning struck again, and we were all very sad.

Davis started the eighth by getting two pretty quick groundouts, and at 90 pitches on the nose, he seemed poised to easily finish off the inning and maybe go the distance. Instead, he danced around Edgar Renteria and gave up a seven-pitch walk, then watched as Randy Winn lined a cut fastball to right for a base hit. Suddenly the go-ahead run was up next, and Davis was pulled in favor of Chad Qualls. Qualls isn't exactly known for going beyond his assigned inning -- he's done it just four other times in 49 appearances, although each was relatively successful. Instead of having to get four outs, though, Qualls needed just one, for after a three-run jack by pinch-hitter Bengie Molina, his services weren't even required for the ninth. 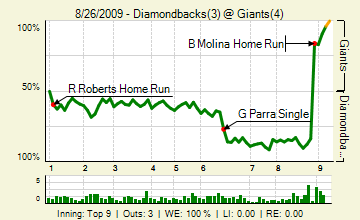 Let me just go ahead and put that in perspective: Chad Qualls had a negative sixty-six point eight percent impact on our chances of winning. Sure, Davis put the first two runners on base, but his pitching up to that point gets him off the hook for most of that blame. Parra had a good game against a lefty for once, and Davis struggled with runners in scoring position like he does every time I recap one of his starts. Seriously, it's baffling.

The Diamondbacks had just seven hits and two walks, and that's not going to get the job done very often (case in point: even with a good outing from the starter, we still lost). Upton and Ryal each reached base twice on a hit and a walk, and Parra added a couple of hits. For the Giants, Renteria walked twice, and Uribe added a base on balls to his home run.

After a couple of one-run losses, the Diamondbacks will try to avoid being swept tomorrow night by sending out Yusmeiro Peti--oh dear.