Diamondbacks 4, Gigantes 5: Down, But Never Out

Share All sharing options for: Diamondbacks 4, Gigantes 5: Down, But Never Out

I have finally returned, hat hair and all, photos in hand, from the joys (frustrations?) of live major league baseball at PhoneCompanyPark here in San Francisco. It was Latino Heritage night tonight, and the starting lineup for Los Gigantes consisted mainly of guys who didn't play 14 innings the night before. But Dan Haren and the Diamondbacks couldn't muster any offense against fellow All-Star Matt Cain, a late rally fell just short, and the Diamondbacks lost 5 to 4.

I am not promising that this is the most organized recap I've ever written, but details and photos are after the jump.

Dan Haren vs Matt Cain, a matchup I was greatly looking forward to. Two hard-throwing hurlers, two All-Stars, two pitchers who have had struggles, but who also have the potential to go 9 shutout innings. I expected a low-scoring game, and that's pretty much what we got.

San Francisco scored the first run of the game in the 2nd inning on a solo homer to left courtesy of Juan Uribe. It was a hanging slider that Haren knew was gone once Uribe made contact. Haren has given up 9 home runs since the All-Star game, and about half of them have been solo shots. But down 1-0 with Haren on the mound was not too much to ask to overcome, and indeed the Diamondbacks took the lead in the 5th. With Alex Romero at first and Augie Ojeda at bat, the hit-and-run was on, Augie popped out to left, and Romero barely made it back safely to first. But wait, why is Augie standing at first and telling Alex to go to second?? Whaaat? Even Yahoo is confused, it still thinks "A. Ojeda flied out to right". Aha, Catcher's Interference!! Giants catcher Eli Whiteside had reached out to get the ball to try to throw out Romero, but Ojeda's swing clipped Whiteside's glove, so the runners move up. (The difference between tonight and Chad Tracy's at-bat in Houston was Tracy didn't swing and didn't hit the catcher's glove.) This turned out to be a fabulous situation for the Diamondbacks, as Haren's sacrifice and Stephen Drew's double down the first base line scored both runners. Unfortunately, Chad Tracy ground into a double play, and the potential to add on was erased. (It seemed like he ground into more than just one double-play, but that was Arizona's only DP all night; Tracy was 0 for 3 with 7 men left on base.)

The Diamondbacks had another chance for runs in the 6th, when Parra walked with 2 outs and Romero lined a double down the left field line. Unfortunately, he was out at home plate by 10 freaking feet and should never have been sent home to try and score! I sort of understand taking the risk with 2 out in a close game, but man, Parra was out by a freaking mile, any throw in the vicinity was going to get him. Another wasted opportunity came in the 8th, when reliever Bob Howry literally could not throw a strike to save his life. Ryan Roberts walked (he had 3 on the night with 2 hits and was on base all 5 times) was caught stealing, though on the replay he looked save. Montero later walked as well but Brandon Allen went 0 for 4 (his first game without a hit - DFA!) and couldn't bring Miggy in.

So if both starting pitchers pitched well, how did the Giants score 5 runs?? Well, after the home run by Uribe, Haren shut down the Giants until the 7th inning. Former San Jose Giant Travis Ishikawa doubled to lead off the inning and would later score from third on a wild pitch. (Montero's defense aside, I really don't think he could've gotten that one; Dan was spiking the ball in the dirt all night, and Miggy did the best he could.) Fortunately, Dan was able to get out of the 7th inning with no further damage. (Gutierrez, I believe, was warming just in case.) A.J. Hinch brought in Big Jon Rauch for the 8th, and why not, Rauch has only allowed 3 earned runs since the All-Star Break (an ERA of 1.98). Ohhh but unfortunately, that number doubled tonight, because Rauch couldn't find the strike zone, walked two batters, and allowed a 3-run home run just over the high right field wall to none other than Travis Ishikawa (who should definitely be lobbying for more playing time after going 2 for 4 tonight with 3 RBI).

A day after the Giants blew a 3-run lead in the 14th and lost on a walk-off grand slam... there was no way they'd blow another 3-run lead today.... was there??? It turns out, it almost happened! The Diamondbacks put on quite a 9th inning, 2-out rally against Giants closer Brian Wilson. ("And your hair? It's dumb." It's a cute commercial, if you haven't seen it.) After two quick outs, the game seemed over, but suddenly Wilson couldn't find the strike zone either. Ojeda singled and made it to third base; pinch hitter Rusty Ryal walked, and Drew walked. Ryan Roberts, who was DA MAN tonight, doubled to center to score 2 runners, and suddenly the lead was down to 1 with the tying run only 90 feet away. Now, Bruce Bochy had sent Sergio Romo to start warming up in the 'pen after Ojeda's single, but I thought he was crazy. I was laughing, I really was. I thought, Wilson's pretty decent, he won't mess this up, why would he send Romo to warm up?? (And he warmed up fast.) Why would he think of pulling his closer?? Sure enough, after Roberts' hit, Bochy stalled and stalled and stalled and brought in Romo to face Chad Tracy, who fouled off a few pitches but ended the game by grounding out to second. 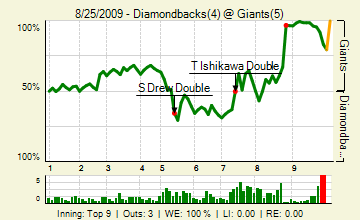 So there was no game-changing 9th inning rally, no extra innings, no walk-off grand slam, but the Diamondbacks were never out of this game. They walked, they hit, and yes they left men on base, but the game never felt out of reach. (Okay, except the 9th, but they proved me wrong.) Dan Haren was the beneficiary of some spectacular defense behind him in the outfield, and a great grab of his own. In the end, I think this was just the way the chips fell tonight. It was a good game; can't wait to see them again tomorrow.

I am too tired to post photos tonight, I will make a fanpost with all my photos after tomorrow night's game. Tomorrow's matchup is Davis vs Sanchez, same bat time, same bat channel, and hopefully an earlier recap from Azreous. :) (But with a Doug Davis start, who knows?)