Share All sharing options for: Diamondbacks 7, Astros 5 - Hits, Walks, and Runs, Oh My

When we gathered this morning before the game began, we all felt a sense of trepidation. The team was in a 7-game skid. With Stephen Drew away to tend to his family and Mark Reynolds out with a 100+ fever, the starting lineup suddenly featured 4 players who began the year in the minor leagues, and the bench was made up entirely of Chris Snyder, Rusty Ryal and Dan Haren. Things did not look good.

A 5-run 1st inning against Astros starter Bud Norris suddenly made the day seem a little brighter. In typical Diamondbacks fashion, the game didn't end as stress-free as it could have, it nonetheless ended in a 7-5 win for Arizona. Details under the jump.

The real action in today's game came in the top of the first inning. Roberts doubled, Tracy single and Montero singled, then with 2 outs, Parra walked (after a passed ball moved the runners up), Romero drew a bases-loaded walk (on a very close pitch that could have been called strike 3), and Ojeda and Garland singled. What a nice change from the past week! Walks, hits, and 2-out RBIs!! The Diamondbacks got the benefit of a few calls in the inning, but once Norris was rattled, he was completely out of it. His good slider were either dropping too low or hanging, and his fastballs were sailing out of the zone. Trent Oeltjen didn't think the inning was very nice, though, because he bookended the inning with groundouts to second base. The Diamondbacks would add one more run off of Norris in the 2nd, but Norris was out of the game after 1+ inning pitched, 56 pitches thrown, 6 hits and 3 walks.

With a 5-run lead, Jon Garland went to work. He kept the ball low and in, and got a good mix of ground outs and fly outs. His pitch count was a little high because the batters were working the count and fouling off good pitches. Garland worked around some fumbling defense and induced nice double play ended a threat in the 3rd, and it was then that I got a good feeling about this game. Some breaks were going the Diamondbacks' way, they were still accumulating some base runners (though not runs), and Garland was getting big outs. I had a really good feeling about this game.

Garland kept Houston scoreless until the 5th. Humberto Quintero lead off the inning with a solo home run, and some two-out base hits brought the Astros to 6-3. Garland's pitches seemed to be flattening out and staying over the plate. A.J. Hinch let Garland get out of his own mess in the 6th inning, but not before the Astros scored again to get within two runs. Garland ended the day over 100 pitches in 6 innings, 10 hits, 1 walk, and 4 earned runs (2 solo home runs).

Alright, I admit, the good feeling had started to subside by the 6th and 7th innings. Arizona, as usual, had gotten all their runs at once and hadn't scored off of the relievers - credit Paulino and Arias for pitching 5 scoreless innings and keeping their team in the game. Houston was helped out in the 6th by a bizarre called 3rd strike on Chad Tracy as Ryan Roberts stole 2nd base. Tracy and both base runners just stood there in amazement as home plate umpire Angel Hernandez called that pitch a strike - one that the catcher reached out and grabbed before it even crossed home plate. (I sure hope that call gets a few looks from the powers that be.)

Juan Gutierrez and Jon Rauch each pitched scoreless frames in the 7th and 8th, with Rauch striking out the side, to get to former Astro Chad Qualls in the 9th. The Diamondbacks had added an insurance run in the 8th, so it was a 3-run game and Qualls was in for the save. It's never as easy as it should be - Qualls got himself into trouble (with no help from a passed ball by Montero) and allowed Tejada to score, but he got two groundouts from Carlos Lee and Geoff Blum to end the game 7-5. 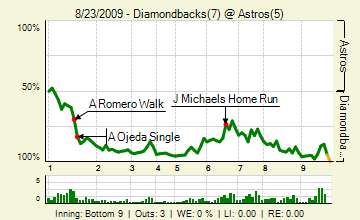 This game was not as relaxing as the fangraph makes it appear, and I think the 18 people in the gameday thread would agree. (Though I suppose it was more than that, if you count Jim, Chris, Katie and Phil all posting from some pub in Tucson under one account.) Only 318 comments today, from Azreous, pygalgia, snakecharmer, kishi, katers, soco, Zephon, DbacksSkins, emilylovesthedbacks, luckycc, unnamedDBacksfan, hotclaws, britdback, SeanMillerSavior, Fiona, IHateSouthBend, jazzbo13, and Muu. As usual, 'Skins led the way with 68, and I (snakecharmer) barely edged pygalgia for second place, 56-55.

Off day tomorrow, folks! A two-day win streak! The team arrives in San Francisco around brunch time, and Justin Upton rehabs tomorrow night in San Jose. I'm going to try to get down there for that one, and maybe I'll see some of you Bay Area folks Tuesday or Wednesday in the city. A win is a nice start to the week - now let's hope the Diamondbacks can keep it going!