Hey, you take your comforts where you can, the way Arizona have been playing of late. And while the streaks of both defeat and offensive futility continued unabated - seven losses in a row and ten consecutive games scoring four runs or less - Mark Reynolds took ball four with one out in the sixth innings. The last time a Diamondback had accepted a free-pass was almost five days previously, when the same batter trotted to first in the ninth inning against Atlanta. And then, to top it all, Chris Snyder repeated the feat later in the same inning, no less. Daron Sutton, understandably, roared the team on, thrilled to be part of such a momentous event.

Yeah, like I said: when it comes to your 2009 Diamondbacks, you'll accept any crumb of comfort. A couple more broken cookies after the jump.

And it started so well too. Hits to the first three Arizona batters resulted in the Diamondbacks scoring a run before we made an out, and Reynolds, legged out a grounder, escaping a double-play to make it 2-0 to us. Things could really only go downhill from there - and they promptly did, Brandon Allen striding to the plate for his first at-bat in the majors... and promptly grounding into an inning-ending double-play. I think we should probably have taken the hint from that: the baseball gods had no intention of taking their foot off our necks.

For you know that hit by Gerado Parra which scored out first run? Y'know, before any Arizona batters had actually been, oh, retired? That was it. We wouldn't have another knock with a runner in scoring position the rest of the night, going 0-for-8 to leave our clutch performance in this series at a woeful 1-for-15. The closest we'd come to breaking through against Moehler - yeah, the pitcher who hadn't won a start in more than a month - was the sixth, when we got those two walks and loaded the bases. However, a call to the bullpen led to pinch-hitter Miguel Montero grounding out, and that was it.

With all respect to the Littlest Ballplayer, it's probably not a good sign that Augie Ojeda was the main offensive force on the team tonight. He had a pair of doubles, including one which led off the seventh inning - naturally, he was stranded on the base-paths. Ryan Roberts also had a decent night, with a couple of hits and a stolen base. And Brandon Allen did get the first hit of his career, singling to center in the top of the fourth inning, and showed decent form with the glove. Those were the scant highlights: our current streak of scoring four or less runs is tied for the second-longest in the NL this year, just behind an 11-game run by Washington in June.

Max Scherzer took 101 pitches to get through five innings and was done. Most of the damage to his pitch-count was one in the fifth, where he threw nearly 40, and only escaped the inning by striking out Hunter Pence with the bases-loaded. His line for the night was once again mediocre: seven hits, two walks and four runs, all earned. He certainly seems to be flagging of late, with an August ERA in his five starts of 6.23. His K-rate is still great, but in those 26 innings, he has allowed 34 hits and nine walks.

The Astros were helped by the latest edition of Outfield Fundamentals 1.0.1 from your Arizona Diamondbacks. In the second, Alex Romero ground to a halt in right, claiming fan interference on a hit down the line, insteading of chasing the ball, and the runner reached third. Then, in the fifth, Gerardo Parra overthrew the cut-off man, trying to get the speedy Bourn on a sacrifice fly attempt. That allowed a man to reach third, from where he scored, and Romero's lollygagging turned a single into a double. Oh, and Trent Oeltjen is now 3-for-32 since August 12. Recently, none of the trio seem very interested in staking a claim for a 2010 roster-spot.

[Speaking of such things, Chris Young is certainly not slacking in his bid with the Reno Aces to reclaim center-field. In the first seven games, he has hit .300, going 9-for-30, and that figure is only going to increase, as tonight, he has gone 3-for-4 in Colorado Springs, with the game currently in the seventh inning, and Reno having just taken the lead, 6-5. Eric Byrnes... Not so much: he's hitting .217 at time of writing, in his sixth appearance, 5-for-21 with one double.]

The Diamondbacks bullpen continued their recent string of effective outings. Clay Zavada and Esmerling Vasquez combined for three shutout innings, with just one Astros baserunner, a single off Vasquez. Zavada was particularly effective, retiring all six batters he faced on only twenty pitches. Or, as Max Scherzer calls it  "the first out"... However, the Houston bullpen was almost as dominant, only two Arizona batters reaching during their 3.1 innings of work. That sealed the defeat, and also the series loss. 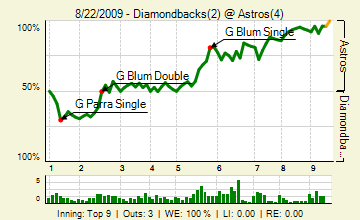 We tried. We really did. And we did at least get past two hundred comments tonight, rather than barely scraping past a hundred as yesterday. The early runs provoked a false sense of optimism, which was seen slinking for the door, muttering something about another appointment, in the bottom of the fifth inning. Early arrival ZonaBacks10 led the way, ahead of hotclaws. Also taking part: Clefo, Wimb, snakecharmer, UAwildcats, TwinnerA, Fiona, luckycc, Zephon, kishi, DbacksSkins, emilylovesthedbacks and Counsellmember.

And with that, I'm off to shuffle the iPod in preparation for tomorrow's road-trip to Tucson [I finally have more music on my 'puter than will fit on the 30Gb beast, so I am having to engage in actual selection. I never realized I had quite so much Front 242, Front Line Assembly and Funker Vogt. And that's just the F's...]. We'll see those of you who we're seeing in Risky Business around noon, or possibly at the Toros game that night. Something Gameday Thread should be going up in the morning, if not by me, then I'm sure 'Charmer will be taking care of it!