I know the title sounds like a third-grade joke ["Why did the Arizona snake cross the road? To see its flat-mate"], but before tonight, only one National League team in the past fifty years had gone without a base on balls for four consecutive games. That was the 1976 Expos, who did it from August 8-11 - adding the partial contests before and after, they went a total of 153 at-bats between free passes. The 2009 Diamondbacks have now followed suit, posting their fourth straight zero-walk game this evening - they are up to 129 at-bats, and still counting.

Perhaps we should take comfort, after a series of escalating blowouts, in that the team actually kept this close. The split personality taking the form of Yusmeiro Petit delivered its usual contrary performance, allowing one run in six innings, on only four hits. It seems that whenever Dan Haren pitches well, Petit blows chunks, and vice-versa. If they could please make up their mind, we'd have one ace and one genuinely sucky pitcher, rather than this confusing melange of the two. However, one run proved more than enough for the Astros, as Roy Oswalt mowed down Arizona - in seven starts against us at Minute Maid Park, he is 7-0 with a 0.87 ERA over 52 innings.

More questionable plate-discipline after the jump.

The Diamondbacks' sudden decision to avoid the free pass is pretty inexplicable, but in the past six contests, we have managed just two walks, while striking out a total of fifty times. It's strange, since over the first half of the season, if we did not much else, we were at least taking walks - we ended sixth in the National League, with 332 - the #1 Dodgers had 356. But since the break, we're down in tenth, and heading south. Particular  offenders are Miguel Montero and Trent Oeltjen: the former has only three BB in 111 AB while the Aussie has certainly not gone walkabout, with just one in 54 AB. Gerardo Parra (four in 131) and Alex Romero (three in 77), aren't far behind.

If you're not getting on-base that way, you'd better be hitting, and that hasn't been the case for the Diamondbacks of late either. Over the losing streak, in almost two hundred at-bats, Arizona's average is just .177, with an OPS...well, let's just say it starts with a four, and leave it at that, shall we? Put those together and the reason for the streak becomes obvious - a total of twelve runs scored, or an average of just two per contest. Anyone relying on Taco Bell's free tacos must be getting pretty hungry, as this was the ninth consecutive night where the Diamondbacks have scored four runs or less. Only three NL teams have had longer such streaks this year.

It was the third 1-0 defeat suffered by Arizona this season - that matches the total number we suffered from 2004-08 inclusive. We did have our chances, but the Diamondbacks went 0-for-7 with runners in scoring position. The best opportunities came in the third and fourth innings: each time, we had a man in scoring position with nobody out, thanks to singles from Oeltjen and Romero, and a Mark Reynolds double respectively. However, a botched bunt by Petit largely snuffed the former hope, while Chad Tracy fouled out with Reynolds at third one down and in the fourth. We had one at-bat with anyone past first beyon that point, Tracy grounding out to end the sixth.

If there was a bright spot to be taken from this, it was a solid outing by Petit, who nibbled effectively, hitting his spots and mixing his locations to very good effect. A walk proved his sole undoing, as the runner then stole second and came home on a double to left. [The stolen-base, incidentally, is another weapon which has almost evaporated from the D-backs armory. We have just two successful attempts in the past fourteen games] While he got into trouble in the sixth, loading the bases with one out, a foul-out and fly-out got him through the jam.

No home-runs: that's another good indicator of a solid Petit outing. Well, duh, you might say. Less home-runs is better than more, especially when - as for the majority of Petit HRs this year - there's someone on base at the time. However, there is a very, very sharp line between the games where he allows a home-run and those where he doesn't, and it's not just the long-balls. His hits per inning overall more than doubles in games where one leaves the yard. Here's how his outings break down so far.

After he left the game, Juan Gutierrez and Jon Rauch posted zeroes, though they could hardly have been in more contrasting fashions. Gutierrez loaded the bases with one out, and it took a niftily-turned 6-3 double-play by Mark Reynolds to get him out of the jam. Rauch retired all three batters he faced, on eleven pitches. Still, both men continued their impressive form since the break, with ERAs of 2.25 and 2.13 respectively - I have to say, the bullpen could be a strength for this team in 2010, if they can keep up the performances they've shown in the second-half.

However, it's kinda hard to do anything but lose when you don't score any runs, and the responsibility for this one lies squarely on the offense - I guess it makes a chance from starting pitching that hardly starts, and barely qualifies as pitching, which has been the dominant theme prior to tonight. Every day, something different... 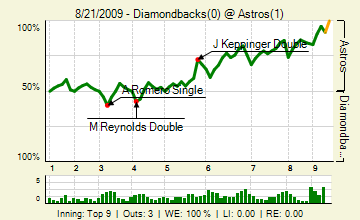 Never a good sign when your losing pitcher is Master of his Domain, and indeed the only Diamondback to be better than +5%. Only one of the hitters even made it into positive territory, Alex Romero squeaking in there with a meagre +1.7%. A feeble performance by Arizona was matched by a serious dose of apathy in the Gameday Thread, which took a burst of post-game arrivals to get into three figures. kishi led the way. With 26. No-one else gets a mention beyond the roll-call: snakecharmer, 4 Corners Fan, Clefo, katers, BattleMoses, Zephon, piratedan7, DbacksSkins, Counsellmember, rapdawg, Azreous, pygalgia and hotclaws.

I'd almost say it was time for another patented Reynolds Rant, but with less than forty games left, there hardly seems much point. The rosters expand in ten days, and with Reynolds' pursuit of becoming the first ever 50/30 man having apparently stalled, is really about the most interesting thing we have to look forward too. That, and the return of Justin Upton. Oh, plus SnakePitFest. And we're still not Padres fans. Ok: I guess life's not so bad after all...