Share All sharing options for: Diamondbacks 6, Mets 9 - Citi of Angels

An eighth-inning grand-slam by the intriguingly-named Angel Pagan, off Clay Zavada, was the dagger to the heart of the Arizona Diamondbacks tonight, breaking a 5-5 tie and allowing the Mets to level the series at a game apiece. Being honest, we probably didn't deserve anything else apart from a loss: we spurned some early chances to score, and Max Scherzer fell apart in a four-run New York fourth, that didn't exactly feature sound fundamental baseball.

Don't expect this to be one of my greatest recaps. I didn't see a single pitch live, have no interest in watching the re-run in any detail, and Mrs. SnakePit is already tucked up in bed. If you want a word to sum this recap up, I'd go with "pithy." I will commence taking the pith, after the jump. And no, I still categorically refuse to use any Journey references for the recap headline.

It's never a good sign when you give up a home-run with the bases-loaded, to someone who hasn't left the park in more than two years. But that's what Zavada did in the eighth: he got the lead-off batter, but a walk and a pair of pinch-hit singles set the stage for Pagan, whose last homer was all the way back in July 2007. Not that you'd know it as he smacked a 1-1 pitch from the 'Stache into the left-field bleachers. It's ironic, as I spent most of this afternoon writing up a piece which included praising Zavada for giving up only two extra-base hits all last month. But it's no longer July, and the slam means that since the unearned streak which opened his career ended, he has allowed ten earned runs in 10.1 innings...

Even Mark Reynolds 30th home-run of the season in the ninth wasn't enough, though it was such a monster shot, one feels it should probably count for more than a single run, even as a solo shot. Reynolds is now on pace to hit 47 home-runs on the season, and is already - with 58 games left - into the franchise all-time top ten, as are his 19 stolen-bases for the year. Since the World Series win in 2001, only two Diamondbacks have hit more homers: Chris Young (32 in 2007) and Troy Glaus (37 in 2005). Both those numbers seem highly likely to be toast, sooner rather than later.

Justin Upton also went very, very deep in the first inning - like Reynolds his shot reached the second-deck, this time down the left-field line. The only player to have reached that second deck before Saturday night was Justin's brother, BJ. The younger sibling had three hits tonight, including the RBI single that tied the game at five in the top of the sixth, following an RBI groundout from Gerardo Parra, who had two hits, as did Ryan Roberts. However, the bottom of the Arizona order struggled, slots #5-8 going a combined 1-for-10, though Chris Snyder, Chris Young and Augie Ojeda each had a pair of walks down there.

Tonight, it was the pitching that was most of the problem. Scherzer had an excellent first three innings, before the wheels fell off him completely in the fourth, the Mets getting to him for five hits and a wild pitch. Admittedly, he wasn't helped by questionable defense from Young - when you're hitting below .200, you had better be frickin' awesome with the glove - but he just didn't make his pitches. And he had enough of them: it took him 38 to get through the fourth, and that was it for him. Six hits, two walks and four runs, all earned.

Not that Perez was much better: 112 pitches for five innings, allowing six hits and five walks, albeit with seven strikeouts. We had a fabulous chance to bury him in the third: consecutive singles by Roberts, Parra and Upton loaded the bases with no-one out. However, we couldn't do anything at all, Reynolds striking out and Chris Snyder following Montero's cue from last night, grounding into a double-play - and this time, the Mets didn't help us out with a freebie [though we did get a run in the fifth on a passed-ball]. Spurning such opportunities isn't a recipe for success.

Blaine Boyer pitched two innings, giving up an "unearned" run, the result of his own throwing error. As IHSB pointed out, Boyer has now allowed twelve runs in 18.1 innings of work for us - however, only five of those have actually been earned. Allowing more unearned runs than earned is an impressive feat, given that overall in the league this year, 93% of runs have been earned. Juan Gutierrez pitched a scoreless seventh, extening his impressive run of late, before Zavada came in and took the loss in the eighth. 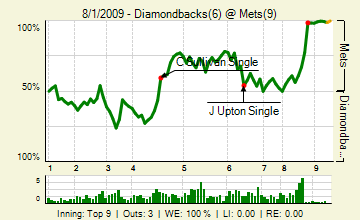 A pretty quiet Gameday Thread. The laideez led the way, hotclawson 56 and snakecharmer with 40 taking the top two spots. Also present were 4 Corners Fan, dima1109, BattleMoses, gasgarza, IHateSouthBend, J Up, drvnlow, Fiona, bcloirao, rapdawg, unnamedDBacksfan and finally, thanks to Sprankton, for his sole comment which allowed us to reach 200 in total. No rest for the wicked, however. I'm getting straight to work on the Gameday Thread, since there's no chance of my being out of bed tomorrow before it should be posted [to save 'charmer from an anxiety attack, I'm scheduling it now, rather than leaving it to about fifteen minutes before first pitch, as I did today!]. We'll also have the July recap, which should go up in the meantime, and Wactivist is on the recap tomorrow as our guest writer, so looking forward to that.