Share All sharing options for: Diamondbacks 1, Phillies 8: Phil Your Hand

This was a dreadful performance. Sure, it was against the reigning AL Cy Young winner, who has been almost untouchable since switching to the NL last month (4-0, 0.82 ERA, 0.73 WHIP). And yes, it was after three other awful games this week -- getting shelled by the Dodgers, getting destroyed by six unearned runs against the Braves (although some of them certainly should have been earned), and then being rocked to sleep by a 95-year-old lefty out of the bullpen in the series opener. So maybe we shouldn't have been surprised. Maybe we should have seen this coming.

Still, after a pretty successful road trip (albeit against a pretty bad set of teams), there were a few reasons to be optimistic about this team. Those reasons are tough to remember now.

There may be more depressed writing and obscure John Wayne references after the jump.

Cliff Lee strolled into his relatively new home this evening and shut down the Arizona Diamondbacks. Straight up. Couple that with the usually stout Phillies offense, and you have all the makings for a good ol' fashioned romp. Lee gave up just two hits and no walks in notching his second complete game as a member of Philadelphia, and his fourth in his past seven starts. He won his seventh straight decision, which finally has his overall record for the year (11-9) looking like it should for a pitcher of his quality. On July 15, Lee was 4-9 with a respectable 3.47 ERA; since then, his line looks something like this:

Lee is quickly proving that perhaps the start of this season (and not last year, where he went from AAA call-up to best pitcher in the league) was the fluke.

Anyway, enough tidbits from the Cliff Lee Fan Club. Let's talk about what little the Diamondbacks did right in today's contest, so that we can move on to the other nine innings. Thank you. Tip your waitress. Technically Lee should have given up three hits; he was carrying a no-hitter into the fourth when Ryan Roberts hit what seemed to be a double down the left-field line, but it was ruled an error even though Pedro Feliz never even got a glove on it. Apparently they got their official scorer on loan from Coors Field. As a result, Lee took the no-no into the sixth, when Chad Tracy (he of the .140 average against lefties) pinch-hit for the ineffective Dan Haren and lined a base hit up the middle. Lee plunked Rusty Ryal with a pitch in the seventh and surrendered a base hit to Alex Romero in the eighth, but that was it.

Meanwhile, the Phillies took Dan Haren to task, knocking him around for six runs in just five innings. As usual, Haren was hitting the strike zone pretty effectively (6 K, 1 BB), but his pitches didn't seem to have enough movement to them, and he got hit hard. All of Philly's runs off Haren were scored via the long ball -- a two-run jack by Chase Utley, a three-run bomb by Ryan Howard on a fastball at his eyes, and a solo shot by Jayson Werth. Coming into today's game, Haren had only given up three HRs that weren't solo jobst, but he nearly equaled that total in just this one start.

The Phillies also tacked on a run in the sixth and seventh. Clay Zavada was hurt by (who else?) Cliff Lee, who reached on a one-out single, moved to second on a wild pitch and scored on a Shane Victorino double. Zavada started the seventh and struck out Howard; Juan Gutierrez replaced him and promptly gave up another solo home run to Werth. Blaine Boyer pitched a scoreless eighth to tidy things up. 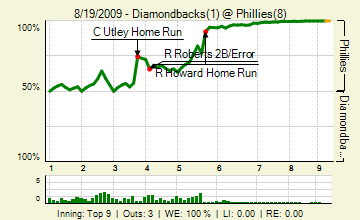 The Fangraph is actually not as terrible as I thought it would be, compared to Sunday and Monday's drubbings. Still, Roberts' placement should be awfully telling, as is this: only one other Diamondback (Tracy, +1.0%) was in the positive. Really a team effort out there tonight.

As you'd imagine, no Arizona player reached base more than once. Amazing how that happens when you reach just three times as a team. For the Phillies, Victorino, Utley, Werth and, yes, Lee had multi-hit games.

Our GameDay Thread was about the same as the Fangraph, but in reverse -- interest petered off significantly as this horrific game continued. Less than 200 comments, and Skins was a third of them. Present: Wailord, Zephon, NewJackCity, 4 Corners Fan, Jim McLennan, snakecharmer, Turambar, hotclaws, DbacksSkins, katers, emilylovesthedbacks, older fart, Sprankton, luckycc, TwinnerA, BattleMoses, kishi and Azreous. Which is me.