Stephen Drew homered to lead off the top of the first inning for the Diamondbacks today. Things went downhill from there, as the Phillies came out strong after a 65-minute rain-delay and Jon Garland didn't. Meanwhile, veteran Jamie Moyer made his first appearance in relief since 1996, replacing Pedro Martinez after the break in the action. He closed down the Arizona offense for six shutout innings, allowing only two baserunners on a pair of singles. The recent offensive struggles - in particular against left-handed pitchers - continued, and we dropped our third game in a row.

Details after the jump. Please bring your umbrellas and wellingtons, as there may be jumping into puddles involved.

I was pretty surprised to see Jon Garland go back to the mound for the Diamondbacks when play resumed in the bottom of the third. Sure, he'd only worked two innings, throwing about 34 pitches, but to then have to go and sit in the dugout for more than an hour, before coming out and heading back to the mound. Was AJ Hinch trying to save the bullpen? If so, it didn't work out too well, as in the 3.1 innings of work that came after the game resumed, Garland allowed eight hits and five runs, admittedly not exactly helped by Ryan Roberts, who wasn't so much waving as drowning in right-field.

Not that he was exactly razor-sharp before it, as the Phillies loaded the bases in the bottom of the first on two hits and a walk. However, Garland did at least manage to escape that jam, striking out Howard, getting Worth to foul out and Ibañez to ground out - 81 homers and 239 RBI between them, and they couldn't do anything with a bases-loaded no-out situation. He allowed another hit in the second, but the rain came in the middle of the third, ending hopes of us squeaking out a 1-0 five inning victory.

When we resumed, the Ryan Roberts Light-field Rodeo was largely responsible for the three-run Phillies third. With two outs and a man on first, he made a dive for a ball that was born more of optimism than any realistic hope of a catch - it went to the wall and the run scored. After an intentional walk, the next batter singled to left, Roberts overthrew not just the cutoff man, but everyone, allowing one man to score and giving the other runners an extra ninety feet. It took an outfield assist from Romero to end the inning - I am inclining to the view that, while Roberts may be a passable outfielder in an emergency, he probably shouldn't be there to start a game.

Solo homers in the fifth and sixth completed the scoring off Garland, who trudged off the mound with a final line of 5.1 innings, eleven hits, two walks and five earned runs. Things looked like they were going to get even worse, as Daniel Schlereth uncorked a wild pitch, to move the two inherited runners into scoring position, and ended up walking his first batter on four straight balls. But Howard struck out with the bases loaded for the second time and a groundout allowed Schlereth to avoid further damage. Leo Rosales and Jon Rauch finished things off.

Meanwhile, Moyer was finishing Arizona off, and the Diamondbacks were held to only four hits - two of those coming to our opening pair of batters - the lowest number since July 5. Two hits for Roberts, but the entire team were held without a walk once again; in the last three games, we have a total of two free passes, while the Diamondbacks have struck out 28 times. Ouch. Josh Whitesell was oh-for-3, meaning that since being re-recalled to the team on May 30th, he is batting .225, which doesn't sound like 2010 first-baseman material. In his defense, that does include him going 1-for-12 as a pinch-hitter, which appears not to be his forte.

I can't say what the weather was like when they resumed, as I hadn't got home by that point - but it was, frankly, abysmal in the seventh inning, and one wonders what the umpires were hoping to accomplish by playing on. Poor Mark Reynolds looked like a dog left out in a thunderstorm, wearing an expression which seemed to say, "What did I do wrong? Because whatever it was, I'm very, very sorry..." The rest of the team should probably be looking somewhat similar after a third consecutive lame performance. Hell Week started promisingly, but Arizona now has its work cut out. 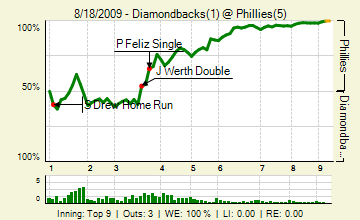 Elsewhere, as noted by 'charmer, Conor Jackson's rehabilitation came to a grinding halt, as he left Visalia, with the same issues which have plagued him all summer. Nick Piecoro floats the possibility that the Diamondbacks may non-tender Jackson - a stunning thought, but one that would certainly help clear up the outfield situation. And in Reno, Daniel Cabrera was chased from his first Triple-A start after just one inning, in which he allowed six runs on four hits and three walks. Doesn't sound like he'll be the answer to our rotational questionmarks, going by that performance.