Diamondbacks 4, Braves 9: Arizona has a case of the Mondays

Share All sharing options for: Diamondbacks 4, Braves 9: Arizona has a case of the Mondays

Yesterday, I theorized that our offense had already packed its bags and headed for the airport before the game started, hence the failure to show up at Chase Field. Extending this theme, it appears that our defense is still circling on the baggage carousel at Hartsfield-Jackson. For six - count 'em - six unearned runs in the third inning for Atlanta doomed the Diamondbacks in this make-up game.

As a result, Max Scherzer's line didn't actually look too bad: five innings pitched, six hits, one walk and three earned runs. However, two of those hits ended up leaving Turner Field, and since it was his own error which led to the inning without end, there's no doubt where the blame lies. Further recriminations after the jump.

I was looking forward to a pleasant Monday afternoon in front of the television, but by the time I got the decks cleared... Well, let's just say, the 7-0 scoreline in favor of Atlanta, with only three innings down, didn't exactly encourage me to step away from the keyboard and pay much attention. I guess you could say we actually "beat" the Braves, as we scored four earned runs to their three. We outhit them 10-6, and it's the first time any NL team has scored nine runs on so few hits in over four years, since Cincinatti did the same to Colorado in July 2005.

Ok, who am I trying to kid. One error does not write off the Braves sending ten men to the plate in the third, and Scherzer fully deserves the loss, having hit two batters in that inning as well [an act which it appears earned Rusty Ryal a retaliatory plunking with two outs in the ninth, something with which I can hardly take issue]. It means that the Diamondbacks have now permitted sixty unearned runs to score this season, 11% of our overall tally - the worst percentage in the NL, where the average is only 7%. There's no doubt that fielding is not the team's strong suit, and hasn't been since at least 2006.

Still, a couple of bright points to note. Mark Reynolds has two hits and one of our two walks [in the past four games, our plate discipline has been lacking, with a K:BB ratio of 38:8]. Gerardo Parra and Stephen Drew also each had a couple of hits, the latter becoming the fourth member of the roster to reach double-digits in homers, his tenth blast of the year joining Reynolds, Justin Upton and Miguel Montero there. That might be it for 2009: next below them is Chris Young on seven; Chad Tracy, Chris Snyder and the departed Felipe Lopez have six. Quite a drop-off from the start of the season, when we thought we might have eight or more guys with 10+ homers.

One of Reynolds' hits was his 38th of the year, in the 7th inning, a two-run shot to center which tied him up again with Albert Pujols for the major-league lead. Only one player in Diamondbacks franchise has hit more in a single season - Luis Gonzalez's 57 in 2001, in case you'd forgotten - and Reynolds still has more than a full quarter of this one left. At his current pace, Special K would hit 52 by the end of the year. That'd be a significant feat these days; since the introduction of mandatory random steroid testing in 2004, only three players in baseball have reached that total: Ryan Howard (58 in 2006), Alex Rodriguez (56, 2007) and David Ortiz (54, 2006).

The bullpen pitched three hitless innings, in the form of Clay Zavada, Blaine Boyer and Esmerling Vasquez. Boyer has been a decent waiver-wire acquisition thus far, with an ERA of 2.52 in 25 innings of work. Not bad for a man released by both St. Louis and Atlanta, posting a 7.13 ERA between those two franchises. Admittedly, the number here is skewed by the fact that he's allowed as many unearned runs as earned (seven each), but he has also not allowed a home-run since joining us. It helps he's getting a lot more groundballs; his GB/AB ratio is 1.53, compared to a career number of 1.04 [MLB average is 0.78].

But these are all overshadowed by the six-run third, which is tied for the worst inning of the year, and sets a new season record for any Diamondbacks' starter. It started with a double, and Max then threw away the bunt when he tried to get the runner advancing to third. The second run scored on a sacrifice fly, but it took Scherzer five attempts to get the third out, the Braves using two hits, a walk and a hit batter to drive in four more runs, the nadir being a bases-clearing double to right-center as Atlanta batted around. Win Probability reduced to 3.1% at the end of the third: for AZ fans, the rain which threatened would have been a miraculous escape, had it ever arrived. 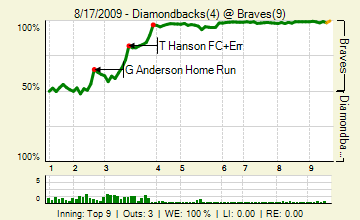 Back on the plane for some more frequent-flier miles go the Diamondbacks, heading up the East coast to take on the NL East leading Philadelphia Phillies, in what promises to be quite an interesting series. Unless Arizona gives them six unearned runs in every game, in which case... Well, let's not go there, shall we?