It took the Dodgers three days and a Petit outing to get their first win of the series but boy did they do it right. I hate to play the blame game and call out those responsible for costing the team a victory but I would like to point out a very suspicious comment posted by somebody at the very beginning of the game.

Things I want to see today:

- A decent outing from Petit that keeps us in the game.
- Offense. Offense. Offense. The results and excitement from the previous couple of games have kind of masked the fact that there’s been nothing doing behind the plate recently. We need to keep hitting.

Voodoo or Voodoo Chile? You decide.

So wha' happen? You'll find out if you click the red words beneath this line. Be forewarned though, this recap will be loosely based on that clip of A Mighty Wind.

High Class Management: As was noted in the Gameday thread, one really does have to wonder why Gerardo Parra was sketched in as our number three hitter in a game against a quality left-handed pitcher. Parra's line versus southpaws before the game was .221/.250/.221 with zero extra base hits and only two walks in 77 at-bats. Unfortunately, these stats proved their credibility as Parra was hitless with two strikeouts against the lefty Randy Wolf. Perhaps A.J. Hinch got a little ahead of himself after seeing Parra drive in the game winning hit just the night before. There's also the argument that Petit should have been yanked from the rotation ages ago. How much more of this are we going to have to watch?

A Comic's Constant Companion: a. Yusmeiro Petit allowed three homeruns in only four innings of work; one of them being served to opposing pitcher Randy Wolf, who had not hit a homerun in nearly five years and has only totaled four in his ten year career. Petit is practically begging to have his spot erased from the rotation and possibly even off the roster completely. He left the game after allowing nine hits and seven earned runs. He has the stuff to get it done though, as seen in the top of the third inning when he struck out Orlando Hudson, Manny Ramirez, and Casey Blake to retire the side, but why the talent isn't being fully utilized is a puzzling question.

b. The D-Backs offense had only one hit up until the eighth inning before they finally broke out against a clearly exhausted Randy Wolf. If you take out that magical eighth then you're left with a one hit wonder by Ryan Roberts. Though, you have to give it to Wolf; he did his homework. After allowing five runs and only striking out one in his last outing against Arizona, he turned the other shoulder and absolutely destroyed them on the rebound.

I Don't Think So: This could really fall under many, many categories. Did you really think the D-Backs were going to win this one? Did you expect Randy Wolf to pitch so well? Did you expect the offense to take the day off? Did you expect Manny Ramirez to strike out twice while going hitless today? I didn't think so either.


Now that that's out of the way we can get down and dirty with the details (if you really want them). Yusmeiro Petit was hammered right away as he allowed a double, single, and a homerun to start the game. Arizona fans were already reaching for their beer or, for some, their Mario Kart. The Diamondbacks rallied back with a single in the bottom of the inning but the runner was stranded. Unfortunately, that would be the only glimpse of offense most Arizona fans had the opportunity of seeing before leaving the game early due to self-induced gastroenteritis.

It almost looked as if Yusmeiro had figured it out in the bottom of the third as he struck out the heart of the Dodgers order. Petit then reverted back to the "Let's not play so great today" memo and allowed four more runs in the bottom of the fourth inning. A homerun to the opposing pitcher and former second baseman and the D-Backs were down 7-0 having not even completed half of the game.

Then, as if we weren't trounced enough, the Dodgers put up two more runs to start the eighth inning. Blaine Boyer entered the game and allowed a single and double (to Randy Wolf no less) in the blink of an eye. Andre Ethier capped off the inning with an RBI double to plate the 'powerhouse pitcher'. Two runs and three hits and the D-Backs were down 9-0 as the once colorful stands quickly turned back to their original black.

As was stated earlier, the D-Backs continued to go down in order until the bottom of the eighth inning. Rusty Ryal kickstarted the celebration with his first career homerun. With a little help from his friends, Augie Ojeda and Stephen Drew, the D-Backs were able to inch closer to the lead thanks to an RBI groundout and triple respectively. Shortly after, both teams decided to help put the game to rest as each squad went down in order to end the game. At last. 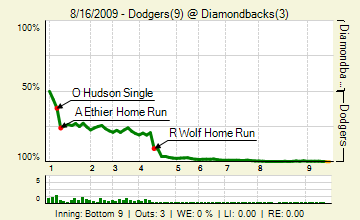 [Click to enlarge, at fangraphs.com]
The eel's ankle: End of game, 100%
The baseball equivalent of [insert bad thing]: Yusmeiro Petit, -31.9%

I almost didn't want to show it to you guys. Absolutely nothing to talk about there that hasn't been already. None of the Diamondbacks reached base more than once while Parra, Reynolds, and Oeltjen failed to reach base at all.
The gameday thread fared slightly better than the team did today with 246 total posts, though it must be said that most of the comments weren't very positive. Jim McLennan gets to toot his horn as he topped the crowd with 75 posts as Skins and chamer followed in his shadow. Roll call looked something like this:kishi, snakecharmer, Jim McLennan, njjohn, unnamedDBacksfan, Azreous, sayheyupton, Sprankton, DbacksSkins, pygalgia, luckycc, Giannaros, 4 Corners Fan, RockiesMagicNumber (better luck next time!), rapdawg, jonny-yuma, hotclaws, pierzynskirules, and Muu.

Tune in tomorrow for another day game at 1:05 as Max Scherzer (7-6, 3.94 ERA) takes on Tommy Hanson (7-2, 3.05 ERA) in Atlanta. The Braves look to rebound after losing a vital series to the Phillies while Arizona looks to bounce back from an ugly performance.