Before the season started, it would have been hard to believe that the Diamondbacks would be 17 games behind the Dodgers in the middle of August, but that's exactly where Arizona stood heading into this three-game set against L.A. So maybe this series doesn't have quite the impact we might have expected -- taking out the boys in blue (no, not Jerry Crawford) is always a worthy endeavor.

Dan Haren toed the rubber for the D-backs tonight against young phenom Clayton Kershaw, and it seemed an appropriate time for Haren to get rid of his usual second-half demons and put together a good start. In his last four outings, Haren wasn't quite up to his usual standards: a 6.26 ERA, less than six innings per start, and a K:BB ratio just over three. Meanwhile, Kershaw had been pulling a Jekyll/Hyde routine lately -- 15 shutout innings against the Cardinals and Braves, but a disastrous four-inning start (4 H, 3 ER, 6 BB against the Brewers) in between. Fortunately for the Diamondbacks, he was more mortal than monster on this night.

Haren's great outing and some shady shenanigans after the jump...

[Update] Andre Ethier calls Haren "afraid to pitch." Could be a couple of interesting games the rest of the series.

Both pitchers set the side down in order for their first frame. In the second, Kershaw had one of those innings that seems like it just won't end. Mark Reynolds started things off by drawing a walk. Miguel Montero continued his hot hitting by looping a double to opposite field, driving in Reynolds. Rusty Ryal walked, and Trent Oeltjen roped a single into left that Manny was able to stumble over and get quickly enough to hold Montero at third. Augie Ojeda hit a grounder that forced out Oeltjen at second, but beat it out to avoid the double play (just barely). Haren came up to help his own cause with a base knock up the middle, scoring Ryal. With Stephen Drew at the plate, the wheels fell off for Kershaw. He fell behind with a breaking ball and a fastball that missed; Drew took two good cuts at fastballs but fouled them off. On 2-2, Kershaw bounced a breaking ball that only got about three feet away from Russell Martin, but it bounced high enough that Ojeda and Haren advanced before he could get to it. And with a full count, Kershaw threw the old 58-foot fastball, which rolled all the way over to the Dodgers dugout and let Ojeda, Haren and Drew all job to their respective next base. Four runs, three hits, three walks, two wild pitches, and a lot of early support for Dan Haren.

The two starters were fine in the early innings besides that blip for Clayton. Haren faced only two batters over the minimum through four, and both of them were Manny Ramirez (two singles). Kershaw worked around a couple more hits and walks to post zeroes in the other frames, and each pitcher was rocking the strikeout (Haren 7, Kershaw 8).

In the fifth, Haren got a little too cute on a first-pitch fastball, and Matt Kemp promptly smacked it into the left-field stands to make it a 4-1 game. The rest of the inning was a bit of an adventure -- Orlando Hudson singled, was sac'd over to second and went to third on a wild pitch, and Rafael Furcal walked, but Haren punched out Martin to get out of the jam.

Meanwhile, Kershaw couldn't make it through the fifth inning, even though his stuff and his control were about the same as they'd been all game (great and awful, respectively). Reynolds singled, Montero struck out, and that was that. Kershaw's line (4.1 IP, 6 H, 4 ER, 4 BB, 9 K) certainly wasn't terrible, but considering the raw stuff he had, it probably should have been better.

Haren escaped trouble in the sixth as well, after Manny doubled with one out. Blake hit a base hit to left, but Manny had to hold up to make sure his helmet wouldn't fall off the ball was going to drop, so he had to stop at third. But Haren got Loney to ground to Ryal, who flipped it to Drew at second, and they got Loney at first for an inning-ending double play. It should be noted that Blake's slide took him about 50 feet out of the basepaths, which earned him a glare from the usually mild-mannered Drew. In the seventh, the defense stepped up -- Montero (with help from a great tag by Drew) gunned down Kemp at second, and Haren made a kick save and a beaut on a ball up the middle that Ryal got to in time to retire the side.

The Diamondbacks continued to waste opportunities in innings not named "the second." They had runners in scoring position in the third (2nd base, two out) and fourth (2nd, one out). They had the leadoff man aboard in the fifth. Still, in the first six innings, they had just two hits and one walk outside of their explosion in the second. But in the seventh, Reynolds got a pitch high and tight that hit him right in the shoulder -- a second aggressive play in about a 10-minute span (whether they were intentional or not is a different issue; as Matty pointed out on the broadcast, when two in a row happen, the intent doesn't matter anymore). Still, Arizona couldn't manage to get any more runs across.

Sitting on 99 pitches, Haren came back out for the eighth inning, and it seemed only a matter of time until somebody got some retaliation. He retired Furcal and Martin quickly, then threw a fastball right between Andre Ethier's shoulder blades (for which Ethier had some choice words for Haren while he trotted over to first). Considering Manny was on deck, I got an extra kick out of the choice to wait until that spot, and I'm not entirely sure why the Dodgers seemed surprised by getting some recompense. Haren's final line: 8 IP, 6 H, 1 ER, 2 BB, 8 K, 109 pitches,  which is more like the Dan Haren we've got to expect and enjoy.

After all the madness, Kemp made a fantastic catch to rob Oeltjen of a hit in the eighth, and Chad Qualls came out for a three-run save opportunity in the ninth. That cushion certainly became necessary when Blake led off with a walk and Kemp smacked a one-out double to put runners on second and third. But Qualls pounded the strike zone on O-Dawg, finally striking him out on a nasty slider, and got Loretta to hit a cue shot off the end of the bat, and the ballgame was over. 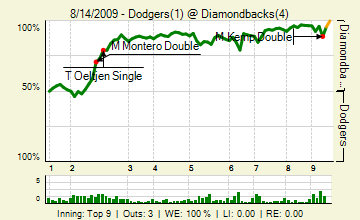 Since the Diamondbacks got a pretty big lead early and there wasn't much offense for either team after that point, there's not much fluctuation on the Fangraphs. The only other player who had even a 5% impact in either direction was Montero (+8.9%).

For the Diamondbacks, every starter got on base at least once. Reynolds had a hit, a walk and a HBP; Ryal had a hit and a walk (lowering his average to .571 -- DFA!). ESPN can call off its Trent Oeltjen .400 Watch, as he's hitting .394 after going 1-for-4 tonight. Kemp had a great game for the Dodgers with a pair of hits, a homer and a walk, and some jackass named Manny had three hits but couldn't come through when challenged directly.

It's Hiroki Kuroda against Doug Davis in tomorrow night's 5:10 start. Should be interesting to see if there's any additional fallout from today's shenanigans. For a pair of division rivals in the dog days of summer, it's certainly a possibility. Meanwhile, regular recaps resume from Jim for tomorrow's game, as I've done two straight and am in desperate need of ice cream. The Giants and Rockies also lost, and a win tomorrow puts us back to single digits under .500. Wild card, here we come!