Diamondbacks 7, Mets 4: The Adventures of Trent, King of the Desert

Share All sharing options for: Diamondbacks 7, Mets 4: The Adventures of Trent, King of the Desert

The Diamondbacks continued to put one over on the New Yorks Mets, winning tonight for the fourth time in five meetings this season. Doug Davis pitched seven solid innings, and helped himself out with a two-run double. Meanwhile, the Thunder from Down Under continued to rumble, Trent Oeltjen hitting his third home-run in just four games, and he is 8-for-20 since his call-up. A packet steamer has been dispatched for Sydney immediately, inquiring if they can perhaps send us a second baseman and a couple of starting pitchers for next year.

Mind you, as it was last seen bumping in an irritated fashion against the dam at the end of Tempe Town Lake, we should probably not expect an immediate response. Details in the usual post-jump location.

Anyone but the Nationals. That seems to be the mantra for the Diamondbacks, as they returned to normal service tonight - providing free tacos for the residents of Arizona. We got off to an early start in that direction, Arizona scoring three in the second inning. The M&M Show had back-to-back doubles, and after an intentional walk to get to Davis, he made them pay, rifling a double into the gap. Ok: really, it was a bloop that bounced past the diving center-fielder, but by the time Doug is telling the story, I think it will probably be closer to my version. It was his first second extra-base hit in almost four years, the one before last one coming on August 19, 2005. It might have been a triple, but his GPS battery ran out rounding second. [Yeah, forgot he actually had a triple on May 25.]

However, more important than any offensive production was the seven innings that he pitched, allowing only two runs on a fourth-inning triple. His control was perhaps a bit shaky, with three walks, but the Mets managed only four hits off him. The outing was his eighth quality start in the past ten games, and dropped his ERA to 3.62. Curiously, all three pitchers used tonight ended with almost the same ERA. Jon Rauch (3.65) followed with a scoreless eighth, ended by a diving catch from Gerardo Parra, while Chad Qualls struggled a bit, striking out the side but allowing three hits in the ninth. They resulted in two runs and lifted his season ERA rising to 3.66.

The rest of the Arizona scoring was sprinkled over various innings. Chad Tracy had a pair of RBI singles, in the thitd and fifth innings, then we tacked on two more in the seventh. Oeltjen homered to right field and Miguel Montero came up just short, instead hitting a ground-rule double into the pool area which scored Parra. Though a memo to the booth: "Aussie, Aussie, Aussie" is not a corruption of the "Augie, Augie, Augie" chant - it's the other way round, since it's been used at Australian sports events for several decades. I wrote in more detail about its origin last season.

Montero led the hit parade, getting three, all doubles. He has 21 on the year, trailing only Brian McCann among NL catchers, and has a shot at the franchise record for the position (26 by Johnny Estrada in 2006). Tracy and Oeltjen each had a pair of hits, while Mark Reynolds had a hit and an intentional walk. Surprisingly, it was only his third of the year - compare Albert Pujols, with whom Mark is tied in home-runs, who has seen the catcher put up four fingers 36 times this season. That's more than the entire Diamondbacks team, 33 after tonight, and a dozen of those were to get to the pitcher. I expect Reynolds' numbers to increase a bit more, now the whole world knows his name..

[Update] Audio clippage, with Doug discussing his outing and his power surge... But why do I suspect a number of the Pitesses will be fast-forwarding to get to the last clip with Mr. Trent Oeltjen? 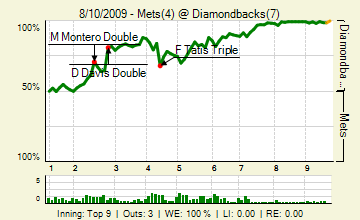 With victory comes comments, and there were approaching 700 tonight. 'Skins led the way, with soco and 'charmer breaking three digits alongside him. I think we can safely say conversation was "varied and wide-ranging", from sign language to (wo)man-eating bears. Also present: 4 Corners Fan, kishi, IHateSouthBend, TwinnerA, hotclaws, piratedan7, emilylovesthedbacks, Zephon, SeanMillerSavior, katers, mrssoco, AJforAZ, Muu, BattleMoses, rapdawg, Turambar and jonny-yuma, so thanks to everyone for chipping in.

Got some non-game audio clippage of interest. Mark Reynolds has a great road-trip, named NL Player of the Week, and had many of his family and friends in attendance. He said he left 15 tickets for every game and joked that "I'm not going to have a paycheck this week." And there's the first words direct from Brandon Webb since his surgery. He said he won't throw for 10-to-12 weeks, and knows that he may not pick up a baseball before the team needs to make a decision on his 2010 option. He hasn't spoken to them yet to get an idea on where things may stand. But he plans on staying here in the Valley to rehab, and expects to be 100% by spring training.