Share All sharing options for: Diamondbacks 3, Mets 2: Go Wild in the Citi

Doug Davis didn't have his best stuff, giving up a season-high number of walks, but for once, that didn't hurt him - he allowed two solo home-runs, and that was it. Meanwhile, Livan Hernandez had an almost identical line to Davis, matching Arizona's starter exactly by allowing four hits and two runs, both on solo home-runs. They both left for pinch-hitters after pitching six innings, and the bullpens took over. The Diamondbacks appeared to have squandered a brilliant chance in the eighth inning, but a wild-pitch brought home the go-ahead run, and even one of Mark Reynolds' most embarrassing errors of the season couldn't stop us from winning the series opener.

Davis walked six batters and still delivered a quality-plus start, allowing two runs in six innings. That's kinda rare - he's only the third starter in the National League to do that or better this year, despite so many free passes. Evil Chris Young was one, and we might remember the other: it was the Nats' John Lannan, who walked six, but still pitched six shutout innings against the Diamondbacks on May 9th. While Davis wasn't quite that effective, the Mets only had three at-bats with runners in scoring position against him all night, and went hitless.

The shakiest moment was likely the last batter he faced. Wright homered to lead off the sixth, tying the game, and a one-out double, followed by two walks around a K, loaded the bases and got Livan pulled for a pinch-hitter. However, with his 106th pitch of the night, Davis got a groundball to short, and the Mets were held there. It was a no-decision for Davis - Esmerling Vasquez got the W, for his scoreless seventh - but he dropped his season ERA to 3.73 and it was his 14th quality start in 22 attempts [a 64% rate, compared to league average of 52%]. And yet, it appears no team was interested enough to offer anything appropriate at the trade deadline.

As noted, Vasquez had a solid seventh, and Jon Rauch was positively brutal, chewing through the Mets, 1-2-3, on 12 pitches. I sense a Player of the Month nomination for Rauch in the upcoming review, and it'd be entirely on merit. In eighteen appearances since June 17, this is the Blowfish's line:
Rauch: 16.1 IP, 14 H, 3 BB, 9 K, 3 ER, 1.65 ERA
Chad Qualls came in for the ninth, and would likely have had a perfectinning, except for Mark Reynolds inexplicably clanking an infield fly just to the left of the pitcher's mound, putting the tying run on base. Visions of blown leads perched on the edge of the sofa, like a pack of malevelolent hobgoblins. However, Qualls calmly regrouped, and got the next batter to ground into a double-play, so it's not as if Mark even made him face any extra batters. Call it a 1-2-2-3 inning.

Solo home-runs by Reynolds (#29) and Miguel Montero (the third Diamondback to reach double figures) gave us leads in the second and fourth innings. That was about it off Hernandez, and we matched the Mets by going 0-for-4 with runners in scoring position in the game. We had a chance to blow things open in the eighth against a wild home bullpen; Gerardo Parra singled, Justin Upton was hit by a pitch and Mark Reynolds walked to load the bases with no outs for Montero. Surely we could kick the door in and get a couple home, at least?

Montero, unfortunately, had other ideas. He grounded the ball right to the first baseman, who threw home for the force at the plate, then took the return throw to complete the double-play. Bases-loaded, no outs, had suddenly become men on second and third, two outs, and a very real chance of scoring nothing at all - especially with Ryan Roberts up to bat. [Hey, eight RBI in 60 games. I'm just saying...] The double-play whacked 27.3% off our Win Probability, and basically made the game a 50/50 bet again. Fortunately, the very next pitch was a bounced fast-ball, that ricocheted away and allowed Upton to trot home with the winning run. Thank you very much.

Not much to report from the offense, as we were held to five hits, with Reynolds the only player to reach safely more than one - he added a double to his home-run and also picked up the walk mentioned two paragraphs higher. Chris Young was 0-for-3 with a trio of strikeouts, and saw his season average sink back down below the Uecker Line, though he did get a walk. Still, his "improvement" is looking more and more a transitory illusion - he's hitting .209 with 16 K's in 43 at-bats in thirteen games since the All-Star break, an .277 OBP and an OPS below .600.

So that's Citi Field. Nice-looking park, though they had to delay the game at one point in the sixth as the giant apple used to mark home-runs needed to be put away. First time I've seem the Mets with their garish blue and orange 'INAUGURAL SEASON' patches - makes it look like they bought their outfits at Home Depot, and forgot to take off the labels. Still, I'm prepared to forgive them this, as long as they continue to gift us winning runs like tonight. 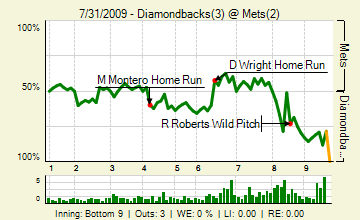 A fun Gameday Thread, in which we discovered that men are from Mars, women from Venus...and Muu from Pluto. kishi led all posters, pipping 'Skins 108-96, with Muu in third [using all those extra fingers and perhaps an occasional tentacle...] Also present: snakecharmer, Clefo, Wimb, pierzynskirules, hotclaws, TwinnerA, paqs, BattleMoses, piratedan7, katers, soco, Spaghetti_Monster, 4 Corners Fan, notSince86, Zephon, rapdawg and marionette, so thanks to everyone for their participation.

And with that, I'm off. It's Mrs. SnakePit's birthday, so that is being celebrated [the cake is not a lie...]. Curiously, there are no active major-leaguers who share her birthday, and there have been only five in the past decade. Guess she'll have to be happy sharing the birthday with JK Rowling, Wesley Snipes, Michael Biehn and Mark Cuban.