Share All sharing options for: Diamondbacks 6, Padres 2: Fathers, Who Aren't in Heaven

The Arizona Diamondbacks came into this afternoon's game looking for a win that would do two important things: extend their winning streak to a season-high five games, and push San Diego down into the NL West cellar behind them. As mentioned by Jim in the series preview, a series sweep was enough for us to storm into fourth place in the division, but first, the boys in red had to pick up that final victory with Max Scherzer on the mound. Or without. But we'll get there.

Max started off dealing, striking out four Padres in the opening two frames and facing just one batter over the minimum through three. But he got in trouble in the fourth inning because of a slew of doubles -- Tony Gwynn, Kevin Kouzmanoff and Will Venable each had a two-bagger that put Scherzer in a 2-0 hole. Scherzer snuck through a spotty fifth without the ball ever being put in play; two strikeouts, two walks, and Miguel Montero gunned down Everth Cabrera's attempt to steal second with some help from a nice tag by Stephen Drew.

Meanwhile, the offense was struggling (take a drink!) in the early innings. In fact, Chad Gaudin had a no-hitter through four -- the only baserunners to that point were Drew, who got plunked in the knee back in the first, and a Chad Tracy walk in the second. As usual, Arizona hitters did their best to make a 5+ ERA pitcher look like the secret love child of Roger Clemens and Randy Johnson. I'll pause to let you clean up the vomit that just wandered into your mouth.

And we're back. The Diamondbacks finally broke into the hit column in the fifth, and mounted the first significant threat to Gaudin, but still came up empty. Gerardo Parra walked, and Tracy followed up with a base hit to right that couldn't quite advance Parra to third. Chris Young flied out toward the gap in left, also not deep enough to move the runners. Scherzer bunted them both into scoring position (although with his .250 average at the time, you could make a case for him trying to give himself run support), and Lopez drew a walk to load 'em up, but Drew struck out and the string of zeroes continued.

Scherzer did his best to keep the game close, setting down the side in order in the sixth and seventh and leaving with 108 pitches, just missing a double-digit strikeout game. He left with an impressive line -- 7 IP, 4 H, 2 ER, 3 BB, 9 K -- and no run support. This continues a season-long trend for pitchers not named "Jon Garland At Home" or "Lumps With Arms Wearing Brandon Webb Disguises": fantastic pitching, below-average results. Case in point:

You can combine those lines for a 2.86 ERA and 1.14 WHIP, with 38 quality starts in 52 outings...yet the trio has combined for a 17-19 record this season. An ERA below 3 and they've won less than a third of their starts. I'm thinking it might be time to revisit just how awful the offense has been this year...

That lack of run scoring thing changed in the seventh. Again, Parra and Tracy were the catalysts; each singled to start the inning, and this time that put runners on the corners with nobody out. Young drove a sac fly into center to score a run, but pinch-hitter Tony Clark (using the "hitter" part loosely) flew out. Felipe Lopez and Drew earned back-to-back walks to load the bases, but with an opportunity to get Scherzer off the hook, or even in line for the win, Justin Upton quickly grounded out to end the inning and continue his recent futility. More on that later.

Snidley Whiplash came in to pitch the eighth and got back on track with a solid 1-2-3 inning, striking out Adrian Gonzalez in the process (he went 1-12 in the series with 5 Ks). And finally, an inning too late for Mad Max, the offense woke up. After today's five-run explosion, the eighth is tied as our highest-scoring inning with the third, and it was a huge factor in today's game. Again, Tracy and Parra were in the middle of it all. Montero got things started with a one-out single, and Parra hit a base knock to right that moved Montero over to third. Tracy reached on a error that Gonzalez really should've been able to handle and possibly turn into a double play, which plated Montero. After a Young strikeout, Romero pinch-hit for Clay Zavada and did what he does best, slapping a ball to right to score Parra and take the lead. But just to pile on, Lopez crushed a ball into the stands for a three-run bomb that made it 6-2, and suddenly there was much rejoicing.

...Until the top of the ninth, when Chad Qualls was brought in for a non-save situation, thanks to the home run. We should know better at this point than to think even a four-run lead is safe with this group; even though the bullpen has actually been above average this year, they've been downright awful in some very inopportune times. Qualls did his best to add another low point to that list, giving up two hits and a walk to load the bases with just one out. But he got a strikeout and a harmless flyout to end the game, and another victory was ours. 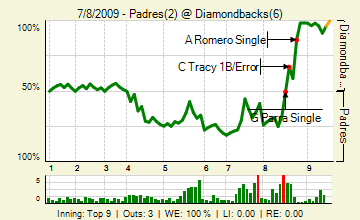 Not surprisingly, Tracy and Parra lead the way, although Romero's tiebreaking hit also scores highly. I've tossed Scherzer on the list even though he didn't make double digits because he really deserved better. I'd wager that we haven't won too many games this season where Upton and Reynolds both performed so poorly, but both of them were surpassed by Young, whose futility happened with more men on base. Upton has struggled mightly the past week or so; in eight games in the month of July, his numbers are stellar: 1-30 (.033), 2 BB, 12 SO. Needless to say, that's not exactly all-star quality there. But hey, at least the one hit was a homer?

For the Diamondbacks, Lopez reached three times (two walks and the homer), as did Tracy and Parra (two hits and a walk). Drew was also on three times with a knock, base on balls and HBP. Zavada and Qualls both had scoreless innings out of the pen. For the Padres, Venable was on base three times (2 H/BB), and Gwynn, Kouzmanoff and Luis Rodriguez got on twice. Gaudin got stuck with a no-decision he probably didn't deserve -- where have we heard that before?

So ends the first sweep of the '09 season. Tomorrow begins a four-game set against the Florida Marlins, and I assume we're stuck with Petit again. It's been exactly a month since we weren't buried in the cellar, so enjoy it while it lasts -- it may be for just a day.

[Post-game audio clippage from Jim] My, that was fun, wasn't it? Another comeback victory: it seems like the team is now consciously trying to prove Reynolds wrong, by falling behind simply so they can show how mentally tough they are. Next target: the Pirates, currently two games in front of us. Boy, it must suck to be a Padres fan - you lead all three games, two of them in the eighth inning, and still end up getting swept. And here's some audio from AJ, Max and Mark on the joys of being part of the hottest team in baseball.