Diamondbacks 4, Padres 3: Davis gets his just deserts - a win

Share All sharing options for: Diamondbacks 4, Padres 3: Davis gets his just deserts - a win

Doug Davis allowed a run tonight - and still won. That's worth noting because it ends a streak of twenty-two consecutive starts, going all the way back to August 29, 2008, without that happening. During those 22 games, he had fourteen quality starts and an ERA of 3.16, yet was credited with only three wins - all coming in games where Doug allowed no runs. It's got to be one of the most unlucky sequences of starting pitching ever.

And it was a sequence which nearly continued, for in the eighth inning, with a two-run lead, The Blowfish almost gave it away. Jon Rauch came in and allowed a leadoff double, then the next hitter smacked the ball even harder to right-field. It hit right on the top of the fence, yet inexplicably, instead of bouncing over the fence for a game-tying homer, to blow Doug's win, shot almost straight up into the air and came down into Justin Upton's glove. With that bit of luck, the baseball gods had finally decided to take their foot off Davis's neck: Rauch and Chad Qualls then retired the next six batters to preserve the win.

More details of the victory after the jump

It certainly helped to be on the right end of some Little League baseball for a change. That helped Arizona manage another comeback [our fourth in a row], after the Padres drew first blood on a second-inning RBI single. In the third, Chris Young led off with a double, and Davis then tried to sacrifice him to third. It was a poor bunt: instead of being aimed down the third-base line, it went almost straight back to the pitcher, Kevin Correia. However, it seemed to startle him, rolling under his glove for error #1.

Correia tracked it down, and still had time to get Davis; however, he threw wildly past first, error #2 allowing Davis to reach second and Young to tie things up. One out later, with Davis on third, Stephen Drew grounded sharply to second, and the throw home was in plenty of time to beat our pitcher. However, the Padres' catcher decided to show off his juggling skills instead of tagging Davis, and the Diamondbacks took the lead on error #3 for the inning. Nice to be the ones shown laughing in the dugout at the wretchedness of the opposition.

We tacked on a couple more runs in the next inning; Miguel Montero singled, and scored on a Gerardo Parra triple - he, in turn, came home courtesy of a Tracy sacrifice-fly. That was it as far as Diamondbacks scoring went, and virtually it as far as offense went - the only hit after the fourth was a Parra single in the sixth. We were out-hit by the Padres 11-6, and they had more walks than us as well. Countering that, Doug Davis decided it was easier to pick San Diego hitters off first than get them out at the plate - his slick move to first removed a couple of Padres

All told, it was a typical Davis outing: nine hits and three walks in 6.1 innings, but only two earned runs - he also struck out six, including two beautiful strikeouts of Adrian Gonzalez, who has looked utterly useless at the plate this series, I'm pleased to report. His evening of incompetence was made complete when Davis was replaced by Scott Schoeneweis in the seventh, with men on the corners and one out.  Gonzalez grounded weakly back to the mound, starting a double-play that ended the threat.

With the departure of Tony Peña for pastures White Soxian [it was amusing to see they had one of the Peña masks taped to a chair in the bullpen!], it looks like Jon Rauch is going to be the new set-up man for the Diamondbacks. However, if he allows many more sequences like the one described in the second paragraph, leading off with back-to-back doubles, he won't there be for long. That said, after almost allowing the game-tying homer, and with that man on second with no outs, he got the next three Padres on a K and two pop-ups. Qualls had a 1-2-3 ninth for the save, though the first out sent Upton a good deal deeper than was truly comfortable.

It was Arizona's third consecutive victory by one run; curiously, the last time we had a four-game winning streak (May 21-24), we also scored eleven in the first game, then took the next three by one run. The victory also gives us a shot at our first sweep of the season in tomorrow's day-game. Indeed, we've only had the chance of a sweep once by the time we got to the final game [vs. Oakland during the previous four-game streak]. Here's to the team doing that, and then we can take on the Marlins, and hopefully keep those wins right on coming. 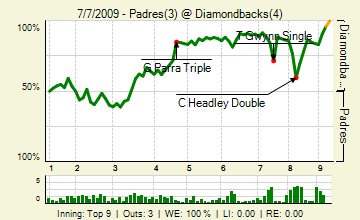 A quieter Gameday Thread than usual, as we were all frantically busy voting for Mark Reynolds, in line with Wailord's somewhat convoluted but undeniable effective scheme [one vote for every out, three for a hit, five for a run, or something like that]. Wailord did duly top the chart, pipping 'charmer 76-69. Also present: emilylovesthedbacks, Zephon, soco, DbacksSkins, kishi, hotclaws, 4 Corners Fan, drvnlow, ASUJon, unnamedDBacksfan, Lisalisa8, C.W., AlanFalcon, asteroid, sayheyupton, chem, NotGuilty, AJforAZ and BleedingSedonaRed, so thanks to them all for their contributions.

And in case you're wondering, the Tony Peña bobblehead night originally scheduled for September 12th is now a bobblehead TBA, according to the official schedule. I wonder if there are now 25,000 bobbleheads destined to become landfill in China somewhere? Either that, or I imagine they'll be made available at a buck each come the next Diamondbacks Yard Sale.