Diamondbacks 6, Padres 5: And did we mention, vote for Mark?

Share All sharing options for: Diamondbacks 6, Padres 5: And did we mention, vote for Mark?

A wobbly home start from Jon Garland. Shoddy defense. Lackluster at-bats given away, leading to wasted scoring opportunities. Two blown leads. Time for Mark Reynolds to go off again, because the positive impact apparently present in the team's play over the past couple of games, seemed to have largely vanished, going by the poor performance from the Diamondbacks in the middle innings tonight.

On the other hand, the fight which this team showed over the weekend was also still present. Two runs down in the middle of the eighth, we hit back with an RBI single from Gerardo Parra, then, after a twin-killing courtesy of  DFA Clark, a pinch-hit homer from Chad Tracy tied the game. Jon Rauch pitched a scoreless ninth and, with two outs, Justin Upton drew a walk. He then stole second, and - who else? - Mark Reynolds flipped a pitch down the left-field line to bring Upton home and give the Diamondbacks their first walk-off win since May 30th.

Details after the jump...

Padres' starter Walter Silva was a wobbly as suspected, but even though their bullpen pitched more than eight innings yesterday, their manager had a quick hook, yanking him with one out in the fourth, minimizing the damage - having nine in the bullpen probably helps a bit, albeit at the expense of the San Diego bench [which, consisting of three players, was more a foot-stool, or possibly a small Ottoman]. By that point, Arizona had already taken the lead, given it back, and then re-captured it.

The Diamondbacks scored in the first on a sacrifice fly by Upton, but four singles - including three with two men out, and one to the opposing pitcher - plus a wild pitch, led to a pair of Padres runs. However, Upton gave us back the lead, just after a doubtful runner's interference call on Felipe Lopez [the kind that never seems to get called on any other team] helped turn men on first and second with no outs, into a man on second and two outs. A two-run homer off the batter's eye in center, largely rendered that issue moot.

It also marked the end of the productive offense for the Diamondbacks until the eighth inning. Oh, there were certainly chances. We loaded the bases with one out in the fourth, but Garland popped up and Lopez swung at the first pitch he saw, grounding out to first. With two on, one out in the seventh and a 3-0 count, Upton swung at what was obviously ball four - he ended the at-bat by going down swinging, and Reynolds grounded out to the pitcher. It also didn't help that we hit into three double-plays, two of them by Clark.

Meanwhile, the Padres tied things up and took the lead, scoring single runs in the fifth, seventh and eighth innings. Jon Garland pitched what was technically a quality start, in that it lasted six innings and he allowed three earned runs. However, he was constantly in trouble and only saved by the Padres woeful performance with men in scoring position. Man on third with no outs in the fourth, fail to score; after the tying run in the fifth, they had men on the corners, again with no outs, and didn't add any more. Garland ended with eight hits, two walks, three runs and couldn't win, for the ninth straight start. One more, and he'll have tied the MLB 'best' this season.

The eighth was probably the low point of the game, as the Padres scored one run and put another two on base, without ever hitting the ball out of the infield. A leadoff walk was followed by a steal of second, and Miguel Montero's throw down to third, as the runner tried to steal that too went wide of Reynolds, and the man came home. [While Montero's offense has been fine, his defense tends to leave me missing Chris Snyder] The next batter got a bunt single then took second on a wild-pitch, and the one after walked. Our Win Probability was down to 14.5%, and making noises about an appointment it had elsewhere.

However, the bottom of the eighth turned things around and we got some good luck in the top of the ninth. The leadoff man singled, but the next batter hit the ball back up the middle, where it took the kindest of caroms to Drew, becoming a tailor-made double-play ball. It seemed the gods of baseball were smiling on us, and after the Padres basically walked Upton intentionally to get to Reynolds, it seemed almost inevitable that the man who has driven the team of late would drive in the winning run.

And so it turned out, and the Diamondbacks have their first three-game winning streak since May 23 [though I note, the 2008 team were without one for over two months, May 16-July 27]. Three hits apiece for Lopez and Parra, while Montero had two, plus Drew, Upton and Reynolds each had a hit and a walk. More free passes than strikeouts tonight, 4-2, which is always nice to see. 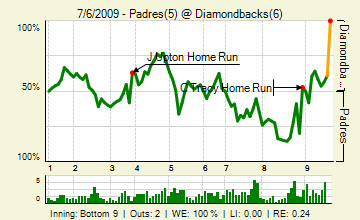 612 posts in the Gameday Thread, even with Wailord's attempt to claim the top spot petering out rearly. ;-) 'Skins propelled things with 157, so Wailord would have had his work cut out anyway; hotclaws just pipped soco for the runners-up spot, though pygalgia probably wins most interesting post of the night for his pictures of boobies. There, if that doesn't get you scampering for the thread, I don't know what will - though you might be in for a surprise... Also present: Snakebitten, 4 Corners Fan, unnamedDBacksfan, kishi, asteroid, Muu, snakecharmer, TAP, TwinnerA, Tim Weiss, emilylovesthedbacks, luckycc, jonny-yuma, NotGuilty, Diamondhacks, Turambar and pepperdinedevil.

Though probably the most memorable thing about the entire night was Daron Sutton in the booth giving a shout-out to the SnakePit and Halos Heaven for their efforts on the Reynolds/Figgins Dream Ticket at the All-Star game. I must confess, I was as giddy as a schoolgirl when I heard that, and it's been duly saved for the permanent record on the Tivo. I'm just delighted the team was able to cap the night off with a win, with the Arizona Cardiacbacks claiming their third successive come from behind success. Wouldn't mind a blowout victory tomorrow though, just for variety.