Diamondbacks 4, Rockies 3: St. Penelope of the Cross is clutch [and vote for Mark!]

Share All sharing options for: Diamondbacks 4, Rockies 3: St. Penelope of the Cross is clutch [and vote for Mark!]

For newcomers to this site, I should explain about St. Penelope. Ms. Cruz has been a patron saint of the 'Pit - and, by extension, the Diamondbacks, since a picture of her posted in a gameday thread broke up a Padres no-hitter, and caused her anointing as St. Penelope. While it started as a joke, her appearance always seems to bring us good luck - it was kinda spooky. But I hadn't invoked her name for a while, since I believe a platform of her theology is that she helps those who help themselves, and there hadn't been much of that from Arizona lately. However, Mark Reynolds' plain speaking and the comeback last night convinced me the time might be today.

Five innings into this game, the Diamondbacks were three runs down, plus had been no-hit by Ubaldo Jimenez, and so I posted her icon in the thread - after all, breaking up no-hitters is how she got her start, and her appearance has immediately ended them since. But this one had the pitcher leading off, and two quick outs followed: was she going to fail us in her our of need? Oh, ye of little faith. Walk to Romero. Walk to Drew. And the tying run was at the plate, in the shape of none other than Reynolds. Would he be the one to harness the power of St. Penelope? And how, uncorking a homer down the left-field line - our first hit of the game, after 17 futile at-bats, scored three runs and tied the game. Doubt not the power of the divine goddess...

This was a significant win in a number of ways. Our first consecutive victories since June 17-18. Our first one-run win since June 11. But perhaps more significantly, these were back-to-back games where we came from behind, and that's important, because it was a major plank of Reynolds criticism: "We get behind a run and, oh, here we go again. We lose focus. We don't play hard. It's like everyone is up there for themselves." That certainly hasn't been the case in the past couple of contests, where we overcame four- and three-run deficits respectively. We haven't seen that kind of fight in this team since the four-game win streak in Florida and Oakland, May 20-23, where we trailed each time. I'm not anointing this team as contenders, but they looked a lot better today and yesterday, than Friday.

Dan Haren's streak came to an end, being pulled for pinch-hitter Tony Clark in the top of the seventh, having thrown 102 pitches. However, it worked - let's be honest, to our amazement - as Clark drew a walk, pushing Gerardo Parra, who'd also reached on balls, into scoring position with one out. Parra then promptly stole third-base, and came home to score the go-ahead run, on a single by Felipe Lopez. Somehow, despite the Rockies having twice as many hits as Arizona on the afternoon, the Diamondbacks had taken the lead, because three of our men to cross home-plate were able to trot to first.

It left the tricky 7-8-9 for the bullpen to get through, nursing an advantage that was more a balsa than a lead. [That's one you'll get on your way home... I hope...] But they delivered three shutout innings, despite putting the first man on in the seventh and eighth. Scott Schoeneweis relieved Jon Rauch for the last out in the seventh, fanningTodd Helton for the second consecutive night. Peña retired all three batters faced in the eighth, after SS issued our only walk of the day - give Tony's June ERA was 11.42, this was a hopeful performance. And Chad Qualls sent the Rockies down 1-2-3 in the ninth; he retired all seven batters faced at Coors, again perhaps a sign he has found the groove.

Dan Haren reduced his league-leading ERA to 2.16, since only one of the three runs allowed was earned - a solo homer to TroyBoy in the fourth. The other two both came in the third inning, with an error by Chad Tracy at first responsible for the fourth out. However, Haren does deserve some of the blame, flapping his glove at a couple of comebackers, at least one of which would have been an easy play for Lopez, turning them both into infield singles. However, given what has happened to Max Scherzer in his past couple of starts, I can't really blame Dan for not being entirely confident in the defense behind him. He allowed seven hits and no walks in six innings, striking out six.

There wasn't much to speak about offensively. Walks outnumbered hits, and I've already discussed the work of Reynolds and Lopez in this area. Miguel Montero and Parra had the other two hits, while Drew and Romero each had a pair of free passes. The phrase "just enough" comes to mind, but it's the kind of game we have lost more often that we have won in the past couple of months, so we'll happily take it, after dropping the last six one-run contests. 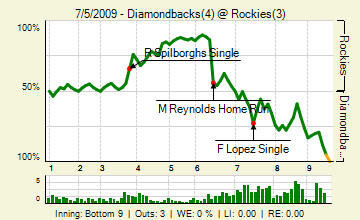 The road-trip for Arizona ends at 3-3, which is perfectly acceptable. Back home to Phoenix for the team now, and a home-stand against the Padres (three games) and Marlins (four), which will take us to the All-Star break. If we sweep the Padres, we could be tied with them [they're still playing the Dodgers at time of writing, having scored five in the ninth to tie things up... So it's not just us then...] - without Jake Peavy and evil Chris Young, they're a much less scary pitching staff. We'll see how it goes. Finally, of course. vote for Mark Reynolds as the final man on the NL All-Star roster. Let me repeat that: