Diamondbacks 11, Rockies 7: What a difference a day makes

Share All sharing options for: Diamondbacks 11, Rockies 7: What a difference a day makes

I don't have to tell you things are bad. Everybody knows things are bad. It's a depression. Everybody's out at home or scared of losing their starting position. The dollar buys a nickel's worth of offense; our ace is bust; Doug Davis keeps a gun under the counter; Dodgers fans are running wild in the street, and there's nobody anywhere who seems to know what to do, and there's no end to it.

We know the bullpen is unfit to breathe and our clutch hitting is unfit to eat. And we sit watching our TVs while some local commentator tells us that today we had fifteen strikeouts and three errors, as if that's the way it's supposed to be! We all know things are bad - worse than bad - they're crazy. It's like everything everywhere is going crazy, so we don't go out any more. We sit in the house, and slowly the fandom we're part of is getting smaller, and all we say is, "Please, at least leave us alone in our living rooms. Let me have my 2001 World Series DVD set and my MLB.TV and my Augie Ojeda bobblehead, and I won't say anything. Just leave us alone."

Diamondbacks win. Details after the jump

Good job I got distracted by re-making our bed in this game [And when I say, "re-making," I'm not just putting on clean sheets. Let's just say, it went through a Chevy Camaro and a Peterbilt truck before ending up as a bed again]. Otherwise, I would probably have begun the recap in the fourth inning after Yusmeiro Petit had been yanked from the game after three ineffective innings, with the Diamondbacks trailing 4-0 at the end of the third. That would have been a mistake, since the Diamondbacks inflicted an eight-inning meltdown on the opposition bullpen for a change, scoring six runs there, and holding on for a much-needed victory, tying their biggest comeback of the year.

I mentioned Petit's home-run rate in the gameday thread, and it didn't exactly take long for him to increase it, allowing a long-ball to the second batter he faced in the game. He allowed three more runs in the third, though in his defense, should largely have escaped the inning with just one run scored, a lucky bloop double to right. However, an eminently-playable ball down the first-base line hit the bag, wrongfooting Tracy and with two outs, another double down the line scored two more runs for Colorado. Still: five hits and two walks in three innings is not what we wanted to see. Though who else do we have?

If there was a turning point in the game, it was probably in the bottom of the fifth. Arizona had clawed their way back into the game, on Reynolds' 23rd homer of the season, and an RBI double by Alex Romero. However, the Rockies threatened, with a man on first and the ball shot over Parra's head in center-field for a double. But a beautiful relay-throw from Parra to Stephen Drew to Miguel Montero and he held on to the ball as Todd Helton slammed into him. It's the kind of fundamental competence we haven't seen on a regular basis, and Arizona then pulled within one when Tracy grounded out, after Parra reached third, thanks to an error by Cook.

It was the eighth inning however, where Arizona roared back, tying a season high with six runs. Back-to-back doubles scored one run, and Chad Tracy and Felipe Lopez then walked to load the bases for the pinch-hitting Chris Young, held out of the starting lineup today, for one reason or another. He redeemed himself in about the best way possible, clearing the bags with a double to left-center, and the Diamondbacks then added on with Drew's third extra-base hit of the evening, a two-run homer that made it 9-4 to the visitors with just six outs left.

Game over? Hah! Not at Coors, and not these Diamondbacks. Clay Zavada may have taken twenty games to allow his first run, but it only took one more for the second, third and fourth runs to show up. His control problems continued, as he walked two, both of which ended up scoring: that's eleven in only 19.1 innings, not what you want from a reliever. That cut the lead to two, and with Tony Peña ineffective, AJ Hinch had to turn to Chad Qualls for a four-out save. He ended the threat and got some more breathing room with a two-RBI hit from Lopez in the top of the ninth, then retired the Rockies 1-2-3 for his first save in more than three weeks.

Mention should be made of the middle-inning relief: Blaine Boyer, Juan Gutierrez and Scott Schoeneweis combined for four shutout innings. Boyer is looking like a decent free acquisition, having allowed two earned runs in ten innings since coming to Arizona. Also good to see SS fan Helton for the last out in the seventh: that kept it a one-run game, and got him the W. On a side-note, almost as satisfying was seeing Troy-boy go 0-for-5 tonight, striking out against Qualls to end the game.  Maybe we should start talking about a Curse of Fangraphs.com. Since they wrote a piece titled Tulowitzki's Revival on June 24, he's hitting .139 (5-for-36, with ten strikeouts). Long may that continue.

The offense roared back to life tonight too. Parra had three hits, and could have had five, save a pair of tough scoring decisions charging the Rockies with errors instead. Drew finished a single short of the cycle, and Montero had two hits and a walk. Since Chris Snyder's last start on June 20th, Miggy has really stepped up his production, htting .325 (12-for-40). Perhaps more impressively, he only has three Ks in that time: before then, he was fanning in 21% of his at-bats. Romero had two hits, and Tracy a hit and two intentional free passes. But it was the guys tacitly criticized last night, Young and Lopez, who came through off the bench, going 2-for-2 with a walk and five RBI. 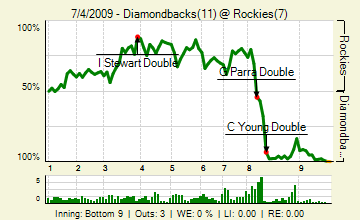 Yes: Upton was worse than Petit as far as Win Probability goes. He was 0-for-5 tonight, and is 4-for-34 since the start of the Angels series last weekend, with eleven strikeouts compared to two walks. Yes: that's worse than Troy Tulowitzki. Make it stop, Justin, please. Augie Ojeda was also hitless before being replaced by Lopez, and continues to struggle, with only five hits in the past month and longer. If it wasn't for the fact that we don't have any other back-up infielders, he should perhaps be contemplating what happened to Ryan Roberts.

However, all told, it was the kind of game where the positives (clutch hitting and pitching when it counted) outweighed the negatives (Petit and another wobbly eighth inning). This was reflected in a happy holiday GDT, with 622 comments - most in a long time. unnamedDBacksfan hit three figures, with IHateSouthBend a credible runner-up. Also present: soco, C.W., hotclaws, DbacksSkins, Giannaros, Rox Girl, Azreous, Sprankton, TwinnerA, 4 Corners Fan, emilylovesthedbacks, Turambar, Moozazan, snakecharmer, drvnlow, Wailord, Fiona and Diamondhacks.

While I'm not surprised we split the first two games of the series, this wasn't quite the way I expected to do it. Still, the net result is, we have our ace on the mound tomorrow, with a chance to take the series. Should be a good match-up, Dan Haren going against Ubaldo Jimenez. See you for that one. I'm still looking for a guest recapper on that one, incidentally, so if you fancy your chances, please let me know.