Diamondbacks 0, Rockies 5: Arizona, good for whatever ails the opposition

Share All sharing options for: Diamondbacks 0, Rockies 5: Arizona, good for whatever ails the opposition

Coming into this game, Colorado's starter, Jorge De La Rosa, had a 4-7 record and a 5.64 ERA, mediocre even by the standards of Coors Field. However, you wouldn't know it looking at today's box-score, as he became the latest pitcher to turn into a Cy Young candidate when facing the Arizona Diamondbacks. He pitched eight innings, allowing only four hits, all singles and, since Arizona was 0-for-4 with runners in scoring position, shut out the Diamondbacks. On our side, Max Scherzer delivered a quality start, but as last time, wasn't helped by his defense - three ghastly errors led to two unearned runs.

Details, if you want them, are after the jump. Though if you are not interested, and would rather do something less painful - perhaps involving knitting needles and your eyes - I quite understand, and will not be offended in the slightest. However, there were some striking post-game comments from Mark Reynolds, so you might want to poke your head in for those. S'up to you...

At least the bullpen didn't blow this one. No, the loss can be blamed, roughly equally, on near non-existent offense and crappy defense, with the Diamondbacks once again showing that, as far as they're concerned, 'fundamental' is just an amusement park set up in a lunatic asylum [look, work with me here, will you?] Memo to Arizona: our draft position is not decided by the number of errors we commit. We added a trio to our league-leading number today, and they weren't even simple ones, like wild throws. Here are the details

This would be why Mark Reynolds, after the game, described it as "a piss-poor performance" and, without naming specific names, tore into his fellow players, stating how the team's current level of play was completely unacceptable. [Thanks to TAP for transcribing the following]:

It seems like we get down a run or two, and nobody gives a shit anymore, and it pisses people off. This is the major leagues, you can't go out and make 3 errors a night and expect to win a game. We look like the damn Bad News Bears out there and it's frustrating as hell.

Nice to see someone stepping up and being accountable - Tom Candiotti thought Reynolds is basically 'coming of age' as a clubhouse leader. However, just as Mark said that all the team meetings in the world won't solve things, neither will taking responsibility and saying what is, really, readily apparent to most people watching the team It's up to the players to turn this around: it's not the coaches, the manager or the front office who can do this, and blaming them is . It's entirely in the hands of those inside the lines. Don't like losing? Hate being in the cellar? You have the tools to fix it. This team is better than the near-100 losses for which we're on pace - but you need to show us.

Today, positive accomplishments were few and far between to mention. Reynolds had a hit and a walk, and also a startling dig out of a bad-hop throw from Ojeda, so if anyone is going to call the team out, he's likely as good a man as any. Though likely outweighed by his little league error, Young had a hit and two walks: his pitch selection and plate discipline have got a lot better of late. Over the past month, he has a .449 OBP, the best of any Diamondback, with nineteen walks and only 17 strikeouts. It's a startling turnaround from May, so perhaps there's hope there.

Max Scherzer pitched six innings, allowed six hits and a walk, and gave up five runs, though as noted above, two of those were unearned. The errors no doubt also contributed to him taking 101 pitches to get through the sixth. Of course, the bullpen were effective, Blaine Boyer and Esmerling Vasquez posting meaningless zeroes when the game wasn't on the line. Where were those innings in Cincinnati? Whatever... 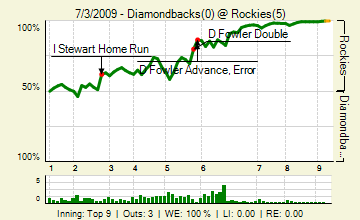 Funnily enough, seems like most people had better things to do, myself included, for much of the game. Hence, the comments failed to reach two hundred, but unnamedDBacksfan put in a sterling effort with 68 of them. Also present (in the loosest sense of the term) were: snakecharmer, Jim McLennan, kishi, soco, AJforAZ, gasgarza, pygalgia, NotGuilty, Fiona, Diamondhacks, and friendly visiting fans Rox Girl, WolfMarauder and befizzle. I have to say, it's hard to get up any enthusiasm for tomorrow's start, which sees the Human Home-Run Machine, Yusmeiro Petit, pitching in Coors. It's more like assuming the crash position and bracing for impact.