Share All sharing options for: Diamondbacks 4, Phillies 0: Stunned into silence

Well, it appears the involvement of Yusmeiro Petit in a shutout created a singularity, sucking scheduled recapper Azreous off the face of the universe [for a bit, anyway]. In his absence, I'll just say at this point, that Petit took a shutout into the seventh inning, was bailed out of a very sticky situation there by Juan Gutierrez, and 2.99 homers from Justin Upton, Chris Snyder and Gerardo Parra provided the offense.

Ok, who had Petit in the "start the ninth shutout of the year" sweepstakes? Anyone? Anyone? Of the previous eight, Doug Davis had four, Max Scherzer and Dan Haren two each - but you'd have got long odds on the man who hadn't won a game since SnakePitFest '08, especially at home against the team who've hit more long-balls than anyone else in the National League. It's only the second time in his career he's been involved in a shutout as the starter - the last time was working six innings of a 3-0 win over the Cubs on July 22nd, 2007.

Last night, however, he was very, very good, and you wonder where this Petit had been the rest of the season. He was hitting his spots with precision, and getting a lot of swings and misses, mostly with his slider. This resulted in eight strikeouts, tying his career high, including consecutive innings where he got Rollins, Utley, Ibañez and Werth - not exactly rabbits. He retired thirteen batters in a row through the end of the sixth, and I think it's safe to say has bought himself a couple more starts.

I think we were all on tenterhooks as he went through the Philadelphia line-up for a second and third time, but it wasn't until the seventh inning that trouble arrived - and, to be fair, it wasn't all Petit's fault. A leadoff single to Howard was followed by a ball smacked to center from Ibañez. Chris Young tried to slide in for the catch, but the ball went right past him and rolled to the wall. I have to say, the scoring decision to call that a double - rather than, say, a single and an error - seemed very fortunate for Young. That marked the end of Peit's night: with the tying run on second and no outs, it was easy to see his winless streak continuing.

Juan Gutierrez, fortunately for all concerned, had different ideas. He struck out the next two batters and, after a walk, got a harmless fly-ball to center for the final out of the inning, preserving the shutout and, in all likelihood, the win for the Diamondbacks. I have to say, the bullpen has been a lot better in July. Their collective ERA with one game to go has been 3.80, a big improvement over the 5.26 posted in June. Particular standouts this month include Esmerling Vasquez (ERA: 1.23), Chad Qualls (1.50), Jon Rauch (2.08) and Gutierrez (3.00). Last night, it was Rauch and Qualls who pitched the eighth and ninth, putting up zeroes and sealing the win.

Meanwhile, JA Happ was showing why he's one of the front-runners for Rookie of the Year, three-hitting the Diamondbacks in six innings of work. Fortunately for Arizona, two of those hits came in the first inning, and the second was Justin Upton's nineteenth home-run of the year, a two-run shot which scored Stephen Drew. Upton had three hits on the night, getting his average back up over the .300 mark. Chris Snyder, making his first start, then went deep in the seventh inning, firing an opening salvo in the battle for playing time with Miguel Montero. Josh Whitesell also had a hit and a walk - well, it sounds better than the "swinging bunt and a walk" it actually was...

Ah, yes: the .99 homer. Gerardo Parra in the eighth, hit a screaming line-drive to right-center field that hit the very top of the wall. But instead of bouncing over, as you'd expect - and as Daron Sutton clearly expected, calling it a home-run immediately - it went straight up in the air, then dropped back just wihin the fence. While immediately clear on replay what had happened, Hinch convinced the umpires to review it; they took a surprising amount of time to do so, and I think they were just astonished by it. Local fans, however, likely recall that happening earlier in the season to an opposing player. Here, it didn't make much difference, as Upton then singled, scoring Parra anyway. But maybe we should take a look at that part of the fence, see what's going on...

It was the final moment of note, and an appropriately weird one, as we unexpectedly win the final game of the series and avoid the sweep. It was an excellent outing by Petit, and I hope that whatever it was he did differently, he can continue to do going forward. Here's the audio-clippage from after the game, with Hinch discussing the replay, him and Snyder talk about Petit, and Upton review the win in general 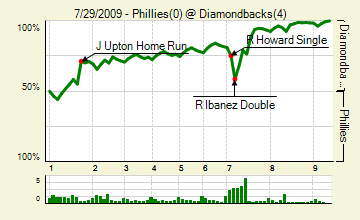 Petit would have been Master, but the single and 'double' leading off the seventh reduced our win probabiliity by 22.4%, so that was debited from his numbers. Escaping that jam, of course, is what handed first place to Gutierrez. 'Skins led a fairly-brisk Gameday Thread, with BattleMoses the runner-up. Also present: piratedan7, snakecharmer, soco, unnamedDBacksfan, edbigghead, njjohn, katers, 4 Corners Fan, emilylovesthedbacks, venomfan, Clefo, rapdawg, AJforAZ, TwinnerA and Wailord.