So what happened today? The Diamondbacks were apparently so helpless that Yahoo! didn't even grant them three outs in an inning. Ex. 7th inning:

More nonsense after the jump...

Just another rough day for the boys in red. 25,044 fans were treated to the Cole Hamels Show as he massacred the D-Backs lineup through the first eight frames. There were a couple of opportunities but it wasn't until the ninth that the Diamondbacks really had their chance to show the Phillies who was boss. It just wasn't enough though and we ended with the 58th loss this season. The Phillies are showing the young D-Backs how to win games though. They have won the first two games of this series despite going 3-22 with RISP. Not cool.

The game started off with a bang as Ryan Roberts notched his third career homerun. From then on, though, Cole Hamels dominated allowing only three more hits while striking out nine and walking none through eight innings. Hamels entered the game with a 4.66 ERA, an ERA+ of 92, and a .287 BAA. It looked like another common case of the D-Backs offering at pitches that should have been taken and, in the end, made a pitcher look better than what he is. Meanwhile, on the other side of the mound, Dan Haren was put to the test against the potent Phillies lineup and it undoubtedly showed. Haren allowed a season high three walks while only lasting five innings for only the second time this season. If you weren't impressed with the Phillies lineup before today then you should be now...

"I don’t know what was harder—that (Phillies lineup) or the All-Star team lineup," Haren said.

That's some serious recognition. Dan still had a decent outing as the Phillies only managed four hits against him. Optimism was still glimmering until Haren was plagued with poor defensive plays by Drew and Tracy in the fifth inning. It was another meltdown #64 by the defense as Drew booted an easy grounder by Jimmy Rollins and Tracy overthrew a ball to Montero at the plate to allow another run to score. In case you were wondering, that's 85 errors for the season - good enough for second in the majors. At the end of the inning when all was said and done, the Phillies were leading 3-1 and Haren was done for the day after 117 pitches.

The Phillies then added another run in the seventh on a fielder's choice by Jayson Worth. Stephen Drew made up for his faulty play earlier in the game with a huge defensive stop that prevented the Phillies from scoring more than one run in the inning. Juan Gutierrez cleaned up a bases loaded mess that Scott Schoeneweis had started and the D-Backs were only down 4-1 entering the eighth (though we're going to skip that part to save some anguish).

We entered the bottom of the ninth with the heart of the order against an extremely vulnerable Brad Lidge. It showed as Upton walked and stole second to the lead the inning. Then on a 2-1 pitch, Mark Reynolds launched a ball into the upperdeck of Friday's. Just like that, the game was suddenly within reach. Unfortunately, just as quickly, the game was no longer within reach. Lidge buckled down and set down the rest of the lineup accordingly. Montero, Young, and Parra couldn't get anything done and the D-Backs fell to the defending champions once again.

In the end, Mark Reynolds extends his hit streak to twelve games, Snyder strikes out in his first at-bat after being reactivated, and Chris Young is still stinking up the place. The Diamondbacks look to avoid the sweep tomorrow with Petit on the mound against the extremely solid J.A. Happ. We'll have to cross our fingers for that one.

A somewhat shaky fangraph shows that the game was still extremely out of reach in the ninth inning despite the homerun. 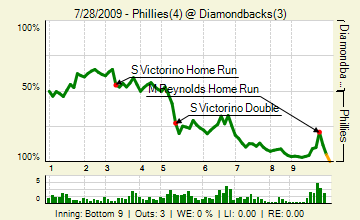 [Click to enlarge, at fangraphs.com]
The eel's ankle: Stephen Drew, 5.9%
Not worth mentioning: Chris Young, -12.6%
The baseball equivalent of [insert bad thing]: Miguel Montero, -19.9%
The gameday thread fared about as well as the team did during the game. Only 257 posts by eighteen members with the largest portion of the numbers coming from Skins' umpire disagreements and kishi's astute observations. Unfortunately, or fortunately depending on how you look at it, Skins fell just short of the century with 96 posts. The list of those present were: Zephon, 4 Corners Fan, njjohn, Muu, hotclaws, DbacksSkins, emilylovesthedbacks, kishi, westofrome, Giannaros, luckycc, TheDBackFan, Clefo, marionette, piratedan7, katers, Azreous, and Turambar.
For you hardcore dudes out there who waited for the recap, I apologize. My wife was feeling ill and I had to tend to her while trying to recap the game simultaneously. Needless to say, she was slightly more important. A bit of fun came out of it though; after explaining to her how the game went and who won, she simply said...

New slogan of the year for the Diamondbacks. Even a lady who pays no attention to baseball at all can tell you how the season has gone this year.

[Morning update] Audio clippage from Haren on his outing, Reynolds on Hamel and both men on the errors: