Share All sharing options for: Diamondbacks 2, Phillies 6: Win Moyer, for the Road

Arizona certainly had their chances to get to crafty lefty veteranTM Jamie Moyer tonight, but squandered them abjectly. The world champion Phillies, on the other hand, did not - albeit aided by the return of some rotten infield defense by the Diamondbacks. The result, three unearned runs and another L for Jon Garland, despite what can only technically be called a "quality start". We ended up with three more knocks than Philadelphia, but were really not in this one after Ryan Howard's fourth-inning bomb.

And in case anyone is wondering, if we'd won the game, the headline would have been Hit Me Baby, One Moyer Time. You're probably now glad we didn't. Details after the jump.

Was it throwback night at Chase Field? Because it certainly seemed that way. Ineffectual clutch hitting? Check: the Diamondbacks were 2-for-11 with runners in scoring position, including some stunningly-wasted opportunities, which I'll get to in a minute. Kicking the ball around the infield like this was a soccer game? Check: most notably in the three-run Philadelphia sixth, where we had not one, not two, but three double-play opportunities on ground-balls hit firmly to the infield, and failed to turn any of them. As noted in the Gameday Thread, I expected the camera to pan over to the dugout and see Bob Melvin standing there.

Begrudgingly, got to take my hat off to Jamie Moyer, who threw 6.2 shutout innings against a Diamondbacks lineup that included two players (Gerardo Parra and Justin Upton) who weren't even born when Moyer made his major-league debut. The oldest starting player for Arizona tonight, Jon Garland, would have been aged just six on that day in June 1986. The opposing starter, taking the loss, was Steve Carlton - who has already been a member of the Hall of Fame for fifteen years. That's how long Moyer has been about.

Still, there's no excuse for what happened in the second and third inning tonight. In the former, we got three consecutive singles to lead off the frame, loading the bases with nobody out. But Garland struck out swinging and Stephen Drew ended the inning with a double-play. Much the same in the next frame, where we put the first two men aboard - the next three hitters couldn't even get the ball out of the infield, with a K, foul-out to the catcher and pop-out to second failing even to advance the base-runners. You just can't expect to spurn chances like that against one of the best teams in the league and get away with it.

We could perhaps have countered Howard's two-run homer, or the RBI double in the fifth after a throwing error by Garland. However, any chance evaporated in a horrible sixth that, once again, had the boos raining down on the field at Chase like...er, rain. After a walk, Ryan Roberts booted an almost-certain double-play ball off Howard - and the massive infield shift put runners on the corners. A single and a hit batter scored one and loaded the bases, still with no-one out. Mark Reynolds bobbled another grounder, turning it into an RBI groundout, and Roberts then double-pumped on the pivot when the next batter hit a third groundball - another RBI groundout resulted. 6-0 Phillies. Awful.

Some respectability came to the score in the eighth. Reynolds broke the shutout with his 27th HR of the season, extending his hitting-streak to eleven games, Chad Tracy added a pinch-hit RBI, and we managed to get the tying run to the on-deck circle, before Drew went down swinging. A seventh-inning single did extend his own streak to nine games, though Miguel Montero's died at nine, as he went 0-for-4. One final note on Montero vs. Snyder. Here are the two catchers' numbers through their age 25 season, as they had similar playing time to that point: Quite startling difference in offensive production. Of course, this doesn't necessarily inform the comparison between them for the rest of the season, but there's no doubt who has been the better at the plate in their career, year for year.

Roberts had a hit and two walks, and somewhat redeemed his earlier defensive gaffe, making a great sprawling grab to end the eighth inning, leaving the bases loaded with Phillies. Parra had a couple of hits, while Reynolds, Upton and Josh Whitesell each had a hit and a walk. We had more hits (9-6) and walks (5-3) than the Phillies, and the same extra-base hits, a homer and a double. However, the two errors made by the defense proved crucial, and even three shutout innings by the bullpen, in the form of Esmerling Vasquez, Clay Zavada and Leo Rosales were only the tiniest of comforts. Not a game Philadelphia won, so much as Arizona lost. 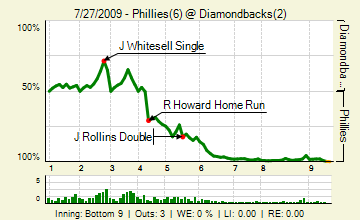 A brisk enough Gameday Thread, led by 'Skins, with kishi, hotclaws and dbacksbj all breaking the half-century. Also present: snakecharmer, J Up, IHateSouthBend, 4 Corners Fan, katers, njjohn, Giannaros, edbigghead, NewJackCity, piratedan7, BattleMoses, Muu, AJforAZ, venomfan and Azreous. Probably better than this game and the Diamondbacks performance deserved. Here's the post-game audio from both Garland and Reynolds - while the former expresses his frustration, he does seem to be picking his words with a good deal more care than after his previous outing.