Diamondbacks 9 - Pirates 0: Yes, even the accidental emoticon formed in this title feels shocked for the absolute travesty that is the Pirates organization

Share All sharing options for: Diamondbacks 9 - Pirates 0: Yes, even the accidental emoticon formed in this title feels shocked for the absolute travesty that is the Pirates organization

With Mad Max Scherzer on the mound and a suddenly resurgent offense, the Diamondbacks were never truly in danger of losing the contest. Indeed, they struck early and often, tagging Virgil Vasquez for at least one run the first four innings, peppering every part of the field with abandon. Scherzer, not to be outdone, went 7 innings and allowed no runs.

After Scherzer mowed down the top of the Pirates’ order, Drew came up and promptly doubled to left. Although he took a large turn, he wisely changed his mind and dropped anchor at second base. Parra was feeling more aggressive, and slapped another double to center, then rolled dice on a triple. He was tagged out without much contest, but it still allowed Drew to score easily, and the Diamondbacks had come lurching out to a first inning lead.

It looked like any lead might be in jeopardy almost immediately, however, when Steve Pearce was able get a single past Scherzer to lead off the top of the second. Luckily, his shipmates weren’t feeling particularly offensive and went down easily with two fly outs to Justin Upton and then a forceout to Drew.

Just like the top of the inning seemed to be the start trouble, the bottom half couldn’t have started out any worse for the Diamondbacks. After Miguel Montero and Chris Young stuck out to start things off, though, Whitesell mustered up his Jewish Fire and drew a walk. Ryan Roberts, hoping to make his most recent visit to the Majors more permanent, quickly slams the first pitch he sees, a slider that doesn’t get far enough inside. Whitesell scores easily and Roberts has himself a two-out RBI double.

Remarkably enough, all of the runs from the point on would be scored in a similar fashion: with two outs. It wasn’t that long ago that it seemed the Boys in Red would rather be doing anything else than bat with two outs, but whatever they’ve been doing recently to get the offense going one can only hope they continue.

To the bottom of the third, after another quick and painless inning for Mad Max, where the Diamondbacks dig themselves another two out hole. The Doubles Parade continues, with Upton getting himself one, setting up Vasquez with a date with the Sheriff. All it took was two pitches and Reynolds launched his 26th home run of the season deep to left-center, almost to Fatburger. Suddenly the Diamondbacks found themselves in a comfortable situation, up 4-0 going into the fourth inning.

The Pirates wouldn’t truly threaten again until the top of the seventh, and were facing a 5-0 deficit thanks to the tag-team effort of a Drew triple and Parra single in the fourth. This was the first time in the game the Buccos would get two runners on base after Ryan Doumit and Brandon Moss singled around a flyout to center. Scherzer wasn’t worried, though, and after a quick meeting at the mound, he stared down the remaining Pirates, forcing Andy LaRoche into a ground out, and Jack Wilson weakly popped out to second to end the threat. It would the last chance the Pirates would have to score for the game, not even getting a man on base the remainder of the game.

Up 5-0, most teams might relax a bit, but the Diamondbacks wisely poured it on to score two additional runs in both the seventh and eighth innings. Blaine Boyer, to his credit, was brilliant and retired every batter he faced with out much effort. He scooped up a weak grounder from Pearce, and the game was over. Four game series won.

As noted in the Game Thread by Mr. McLennan, this is the first back-to-back shutouts for Arizona since beating Washington 4-0 and 5-0 at the end of May last year. The last time the Diamondbacks had such big shutout margins in consecutive games was an absolute trouncing of the Padres 10-0 and 12-0 in July 2002. Also notable is this is only the Diamondbacks second four game series win in 2009, the first happening against Florida May 19th to May 21st.

On the individual performance front, whatever minor hiccup Upton had surrounding and immediately following the All-Star Game seems to be going away. Although over the past 28 days his line looks like .218/.258/.660 with 28 strikeouts and 4 home runs. In the past week, however, Upton has hit .318/.400/1.082 with only 2 strikeouts and 2 home runs. Young is finally back over the .200 mark, and hopefully this is the moment where the only time he’ll see that batting average is in the rear-view mirror. Miggy continues his utter dominance; it’s hard to imagine Chris Synder will be able to just waltz back in and take the starting catcher role back. 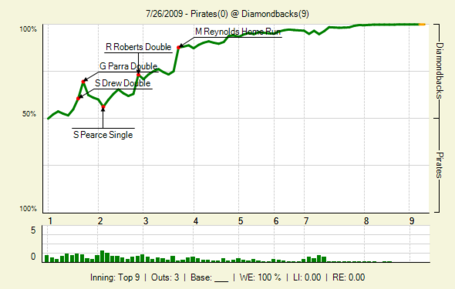 A lively Game Thread today, with nearly 550 comments.  Part of it might be high emotions from a cruising Diamondbacks win, but it might also be from a particularly chatty trio of DbacksSkins, soco (yours truly), and Mr. Bossman himself Jim, the former two virtually tying with 145 comments a piece.  Also joining in on the festivities were: 4 Corners Fan, IHateSouthBend, unnamedDBacksfan, TwinnerA, BattleMoses, kishi, pygalgia, Wimb, snakecharmer, njjohn, Muu, edbigghead, westfrome, dbacksbj, Clefo, the lovely mrssoco, AJforAZ, sayheyupton, and AZBOMBERS bringing up the rear.

So that's it for the Pirates currently.  Next up: the World Champion Illadelphia Illies, who look to rough up the Diamondbacks something fierce.  Let's give 'em what for, eh ol' chaps?