Share All sharing options for: Diamondbacks 7, Pirates 0: Was this Doug Davis's swan-song?

Was this Doug Davis's last start as an Arizona Diamondback? Could be, with the trade deadline coming between now and his scheduled next outing on Friday. But if that was the case, he could hardly have gone out on a better note, pitching six shutout innings and getting the victory. He combined with three relievers on an...er, eight-hitter, and Justin Upton drove in three runs to lead the offense.

It's the third straight game for the Diamondbacks decided by a margin of seven runs. As long as the direction is the same, wouldn't mind more of that tomorrow, but let's get this one recapped first, shall we?

Curious stat - that was Davis's tenth consecutive start walking three or more batters. The last time anyone had a longer streak in the National League was almost five years ago, and belonged to none other than... Brandon Webb, who did it in eleven straight during his sophomore 2004 season. The only other pitcher since 1999 to get past ten is Kaz Ishii, who had 11-game and 12-game runs in 2002 and 2003. However, today, Davis was effectively wild, keeping the Pirates to five hits - he was particularly good with runners in scoring position, Pittsburgh going 1-for-10 there.

And that one hit came from Ross Ohlendorf, who clearly took offense to me pointing out in the Gameday Thread that he had the lowest batting average of any active pitcher. He doubled his career total for hits on the second pitch he saw in the second, driving the ball back up the middle to center-field. The runner on second whizzed around third and headed for home, but the G-zooka went 'BOOM' and Miguel Montero completed the Parra-cide, tagging out the man at the plate. That was as close as the Pirates came to ending the shutout, the seventh pitched by the D-backs this year - four of those have been with Davis starting.

Though it turned out to be quite a comfortable victory in the end, it was pretty frustrating in the early innings, not least because we kept giving the opposition outs on the base-paths - I'd love to see how our numbers there compare against the rest of the league. Mark Reynolds doubled to lead off the second, but was then removed from the equation, and in the third, Augie Ojeda was out in a very ill-advised attempt to stretch a double into a triple. Seems to have been rather too much of that going on lately. Aggression is one thing, but something our aggression appears to border on the psychopathic.

We also had another man out at the plate in the fourth, but I'm more inclined to let that one slide, since it would have been our fourth run in the inning and was about as close a play as you can get. With men on second and third, Chad Tracy hit a grounder to the first-baseman; he threw wildly home, allowing Reynolds to score from third, but the catcher managed, just, to run the ball back to the plate and try for a sprawling tag on the diving Montero. On a night when the broadcast focused on the umpiring crew, that was one of those split-second calls I wouldn't want to have to make.

It came after Justin Upton embarrassed Arizona some more by hitting his 18th home-run of the season [you had to be in the Gameday Thread...]; he's on pace for thirty bombs this year. Only four players his age or younger have done that since 1987 - A-Rod, Pujols, Miguel Cabrera and Andruw Jones. I think we'll be happy if J-Up's career follows any of those paths. He had two hits and a walk,  Montero and Stephen Drew had their, by now almost customary, two-hit nights, and Ojeda doubled twice, only the fourth time in his career he's had two extra-base knocks in the same game.

The good - or, at least, credible - bullpen showed up after Davis left. Juan Gutierrez, Jon Rauch and Chad Qualls each delivered a scoreless inning; Qualls pitched the ninth, despite it being a 7-0 game at that point, having warmed up during the bottom of the eighth, when it was still a save situation. We added on four runs  [delightful to be on the giving end there], and Qualls came in anyway. I'm wondering if this will be the standard configuration for the team when preserving a win, after the departure of Tony Peña, with Schoeneweis facing the odd tough lefty. 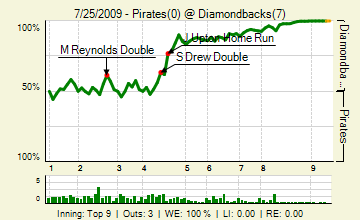 A busy and active Gameday Thread, which is good to see. 'Skins and hotclaws fought it out at the top, the former just ending ahead, 101-93. Also present: edbigghead, 4 Corners Fan, kishi, Wimb, IHateSouthBend, Spaghetti_Monster, westofrome, AZBOMBERS, katers, MsSeamHead (welcome!), drvnlow and njjohn. Interesting question posed as to who was the best Arizona closer of all-time. Just for the record, here are the top ten relievers in Diamondbacks' history, by ERA+ - minimum of 75 innings pitched to qualify:

Certainly some interesting names there, and some surprises too. One thing I note is that Swindell and Kim are the only ones who were part of either of the back-to-back division titles in 2001 and 2002 - the former, of course, being the World Series team. Look at the 2002 'pen in particular, and outside of Kim and Mike Koplove, there wasn't much to speak off. Admittedly, with Randy and Curt combining to go 47-12, and averaging 7.42 innings per start, who needs relievers?

Series finally tomorrow, with Arizona assured of at least a split. Looking for more than that - this is the Pirates, after all, and we do have Scherzer on the mound. soco on the recap, subbing for the wedding-bound 'charmer. See you for that one: looking forward to being able to watch an entire game, for the first time in ages!