And it was all going so well, too. 2-0 up, thanks to a home-run by Ryan Roberts - I'll repeat that, Ryan Roberts - the Diamondbacks were winning, loose and having fun. That much was clear, from the reception Roberts got in the dugout on returning there after his first long-ball since August 3rd, 2006 [off Cory Lidle - if I was Zach Duke, I'd stay out of private planes for a bit...]. He was completely ignored, given the cold shoulder by his team mates, and was left "Woo!"-ing plaintively on his own... until the ice cracked, and they piled onto him.

That was likely the high-point of the evening; the Petit Unit suffered the latest of his patented meltdowns, the Pirates tagged him for four earned runs as he retired one batter in the fifth, and Pittsburgh delivered another loss to our #5 starters. Our bullpen helped out by allowing four runs in the... Oh, take a wild stab in the dark which inning that was. Details after the jump.

The loss runs the record from the back-end of our rotation this season to a dismal 2-11 in 18 starts. While it's basically impossible for any team to get through a season with five starters, the numbers this year are not greatly different from those posted by our triple-headed #6 beast last season. Petit, Max Scherzer and Edgar Gonzalez combined for 21 starts and a record of 4-10. 2007? Petit, Gonzalez, Dana Eveland and Kim, six wins in 24 starts. Petit is the back-end for a reason - and let's not lose sight of the fact that he is only the back end because of Webb's injury. Otherwise, we'd be running Jon Garland out there every fifth day - no matter how much he 'wanted it'.

That said - boy it was painful to watch. Petit is basically good for once through the rotation. Coming into this game, opponents were hitting .227 against him, first time around - and, lo, tonight, they were 1-for-9 with a single. Second time through, however, that line explodes to .355/.437/.774: basically, he turns opposing hitters into Manny Ramirez on steroids [yeah, I know that's superfluous]. Tonight, the Pirates were 4-for-8 with a walk. Third time? Well, that hasn't happened too often, but after this game, Pittsburgh going 4-for-5, opponents bat .387. Maybe we should put him on a strict count of three innings, then replace him, regardless of the situation.

Things might have been a bit different. We should have had a 3-0 lead, but immediately before Roberts' blast, Stephen Drew was thrown out trying to stretch a double into a triple. And as we tried to come back, Upton got himself hung up between first and second, gifting the Pirates an inning-ending and rally-killing out. On the other side of the balance-sheet, Mark Reynolds chased another foul ball into the stands, ending up in the front row. I wish the AP had a photo, but they should make it part of a promotion for those seats down the third-base line. "Free Lapdance from Your Favorite Diamondback!" [as long as your favorite Diamondback is Mark Reynolds].

Petit was tagged for six runs in 4.1 innings of work, though wasn't helped out by Esmerling Vasquez, who allowed both runners he inherited to score. He followed with a clean sixth, and Leo Rosales started off well, pitching a 1-2-3 seventh. However, inevitably, the eighth was neither clean nor 1-2-3: the Pirates sent ten to the plate against Rosales and Schoeneweis, got six hits and scored four runs. It marks the thirteenth time this season that the opposition has added three or more in the eighth inning - I haven't checked, but it's got to be close to the ugliest frame of any team in the majors this year.

The Diamondbacks didn't show much patience up there: one walk, and only 124 pitches in total, which works out to 3.35 per trip to the plate. Inevitably, Miguel Montero had another multi-hit night, going 2-for-4; similarly, Stephen Drew had his usual two knocks from the leadoff spot. Roberts had a hit as well as his homer, and Reynolds had a hit, in addition to the only walk. But this was a game that went downhill rapidly: we should have known that getting a long-ball from our tattooed infielder emptied the tank as far as the baseball gods were concerned. The fangraph below is a pretty good representation of the enjoyment from and interest in tonight's game. 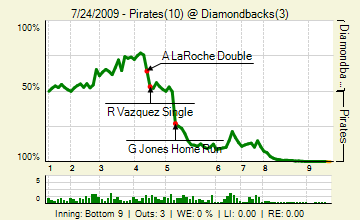 soco and kishi were the main contenders in the Gameday Thread though the rate of comments plummeted as it became clear this was going to be another one of those games - Petit business as usual. I trust that was the reason for everyone vanishing, rather than my belated appearance in the thread... Also present: hotclaws, piratedan7, pygalgia, marionette, DBacksCynthia, TwinnerA, babypuncher and drvnlow. See you all tomorrow evening for the rubber match, Doug Davis trying to win the series for us and make his own record more in line with his ERA.