Share All sharing options for: Diamondbacks 11, Pirates 4: Capt. Invincible Takes the Night Off

I blame IHateSouthBend for this one, after they said, "Something tells me that Haren’s got something better than 4 IP, 4 ER in for us" yesterday. While technically correct, they were only off by one inning, and got the number of earned runs dead right. For Dan Haren delivered his shortest and worst outing of the season, failing to deliver a quality start for only the second time in tweny starts, and saw his season ERA sky-rocket to...well, 2.14.

However, everything ended happily, as the offense rallied from 4-1 down, scoring ten unanswered runs, and the bullpen made it stand up with four perfect innings. What looked worrying like a loss in the middle of the fifth, and a tough battle as late as the seventh-inning stretch, turned into a bit of a blowout. Details after the jump.

In the Gameday Thread, there was some discussion on which Arizona pitcher was 'owed' more by the offense. There's probably a few ways to look at it. Let's go by straight up run support - the average number of runs scored (per 27 outs) by the offense, while the starter is on the mound. here's where the main Arizona four sit in the National League rankings, among the 71 qualifying pitchers:

#15: Dan Haren: 5.0 runs/27 outs
#56: Jon Garland: 3.5
#58: Max Scherzer, 3.4
#70: Doug Davis: 2.7
It's Doug Davis who would certainly seem to have the most ground for complaint. However, Max should also buy them a collective steak dinner - five times already, he has left the game in line for a loss, but been bailed out by the offense scoring enough to get him off the hook.

Haren actually has a good deal to thank his offensive counterparts. They have certainly improved a great deal since the Diamondbacks scored a total of exactly one run during the 19 innings of his first three starts. Tonight, they didn't quite do enough to give him a cheap win - Arizona remains the only team in the majors without one this season, every victory for our starters has needed a quality start - but did take him off the hook for the loss. He seemed to be struggling almost from the off, and only got seven swings and misses all night, 11% of  the strikes - his average this year has been 18%. However, he buckled down and put up four scoreless frames.

Arizona got out first, scoring one in the first, and I can't help feeling we wasted an opportunity for more. The Pirates starter was wobbling, having allowed hits to three of the first four batters - one in, men on first and second, one out. With a full-count on Miguel Montero, Hinch opted to put the runners in motion: Miggy fouled off ball four and then ball five, trying to protect the plate, but swung over ball six and Justin Upton was gunned down at third, ending the inning. I just couldn't see the point in forcing the issue this early, against a pitcher we'd apparently been able to hit. He was slightly ground-ball prone (GB/FB almost even, MLB average being 0.70), but not enough to risk it.

Our next man in scoring position came in the third, and was noteworthy, because it resulted from a passed-ball on a pitch-out. Looked like the Pirates' hurler threw an unexpected breaking ball, crossing up the catcher and going all the way to the backstop. Always something new in baseball... We didn't take advantage of the free base, and the wheels fell off quickly for Haren in the fifth. With two outs, he had two on, but opponents were hitting .193 with RISP this year off our ace. That will have increased: a double was followed by a homer, and a 1-0 lead became a 4-1 deficit in eight pitches. It was only the second long-ball with someone on base given up by Haren all year.

However, the Diamondbacks wasted no time in hitting back, tying the game with three runs in their half of the fifth. A Stephen Drew triple scored Augie Ojeda, and Gerardo Parra then leveled things with his fourth homer of 2009. The teams traded scoreless sixths, before Arizona surged away, with a five-run seventh. The M&M show gave us the lead, Montero doubling home Mark Reynolds, and a Josh Whitesell single saw our catcher just slide into home before the tag. That rattled the Pirates reliever, who walked Ojeda, then allowed a pinch-hit homer to Chad Tracy. The three-run shot made it 9-4: Upton's blast in the eighth, scoring Parra, was more an "oh, alright - I suppose, if you must..." kind of tack-on score.

Three hits and a walk for Reynolds. Two hit and a walk apiece for Drew and Upton - the former is 9-for-17 since returning to the lead-off spot, so seems quite happy there. A hit and two walks for Augie, a hit and a walk for Parra and Whitesell. The only position player who didn't score or drive in a run was Chris Young, who had a miserable night at the plate, going 0-for-5 with an ugly strikeout. Credit also goes to the bullpen: Blaine Boyer, Juan Gutierrez, Jon Rauch and Clay Zavada all pitched 1-2-3 innings, ensuring a calm, relaxed last couple of innings.

So, not quite the perfect game for which I hoped prior to the contest. Still, nice work to pick up Haren, after he has picked up the entire team so many times this season. We certainly needed to take this one, get the home-stand open on the right foot - I can't say I hold out much hope for tomorrow, even with the new, apparently much-improved Yusmeiro Petit on the mound [some things leave scars, y'know]. However, hope springs eternal. 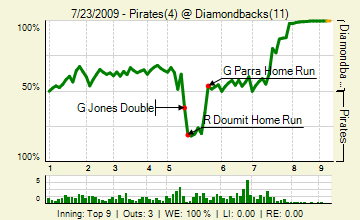 Pretty quiet Gameday Thread, but a decent number of attendees. No position to complain here, since I am looking forward to Sunday, when I might actually be able to watch an entire game, without Torchwood or work running interference - it hasn't happened at all this week otherwise. kishi and hotclaws drove this one - in the passenger seat [or in the trunk, attached to the roof-rack, or wiping the windshield at an intersection] were Clefo, rapdawg, SeanMillerSavior, soco, pierzynskirules, snakecharmer, Muu, luckycc, AJforAZ, katers, westofrome, edbigghead, unnamedDBacksfan, IHateSouthBend and Azreous.