The Arizona Diamondbacks came into a sunny afternoon game against the Colorado Rockies looking to win their second straight series against their divisional foes. Jon Garland was on the bump in the finale, and since he was pitching somewhere besides Chase Field, expectations were higher than normal -- which is to say, higher than awful. Facing him was young fireballer Ubaldo Jimenez and an assortment of other players wearing white and black, but none mattered more than grizzled veteran Todd Helton.

As usual, the Diamondbacks lost this game in their typical style: good starting pitching, pedantic defense, lousy relief at critical times, and no offense to speak of besides a brief spark in the third. Yet through seven innings, it seemed like that might be enough; Garland had been solid heading into that frame, and we were clinging to a 3-2 lead. Then...

The full story of futility and non-AP pictures after the jump.

All things considered, this was a game we had no business winning, yet we were ahead 3-2 going into the bottom of the seventh. Those three runs all came in one fell swoop, a three-run homer by Miguel Montero in the third that was the only blemish on Jimenez's record. Still, Ubaldo was nowhere near as good as his line score might indicate -- he fell behind in the count frequently, went through almost 80 pitches in the first three frames, and snuck out of a few early jams.

In the first, Romero smacked a double down the right-field line with one out. Upton hit a little grounder right at Jimenez, and Romero was running on contact (which I don't fully understand, since being on third with two out isn't exactly important). Ubaldo spun and threw over to Hawpe, and Romero was caught in a rundown halfway between the bags. He managed to avoid getting tagged out long enough for Upton to advance to second behind him, but Reynolds struck out to end the inning. Impotence with runners in scoring position was a recurring theme early on.

The following inning, Whitesell crushed a double into the gap in left-center that neither Seth Smith nor Carlos Gonzalez seemed to get a great jump on. Ojeda drew a walk behind him (three of the four pitches nearly hit him), which brought Garland (.077) to the plate with RISP. Inning over. The Rockies got on the board first in the bottom half, doing all their damage with two outs -- and taking advantage of a porous Arizona defense in the process. CarGo hit a little blooper into the right-field gap that Ojeda, Upton and Young all converged on; Upton ended making the attempt, but his slide was poorly timed and the ball bounced off of him. Since the Colorado home scorer only records an error if there's a gun to his head, it was ruled a double. Yorvit Torrealba followed with a sharp base hit up the middle, and Chris Young, humming the Benny Hill music all the while, bounced the ball off his glove once and then couldn't get a proper grip as he tried to come up firing, allowing Gonzalez to score easily.

The D-backs collected all their offense might and used it up in a span of five batters. Drew led off the inning with a base hit up the middle. Romero hit a weak grounder to second, but got down the line to avoid a double play. He moved to second on a balk, and to third on a 57-foot breaking ball. With a runner on third and one out, Reynolds struck out, but Montero came up next and smacked it 400+ to left-center to make it a 3-1 Diamondback lead.

Garland couldn't escape trouble in the third, and it cost Arizona another run. He plunked Smith to start the inning, and Helton's 500th career double (which was about two feet short of a home run) drove in Smith -- sort of. He ran into Drew on the base paths, and scored on an interference call, something Yahoo's line still hasn't figured out. Granted, he would have scored easily regardless, and Helton should have made it at least to third, because Upton took a terrible route on the ball and it caromed off the wall about 50 feet away from him. By now, the failings on defense and with runners on third should be starting to form a horrific piece of the puzzle.

Both pitchers set down the side in order in the fourth and fifth. In the sixth, Reynolds hit a ball deep in the hole at short that Tulowitzki couldn't do anything with (except throw to first like a girl), and stole second two pitches later. Montero hit another ball in the right-field gap that was 7-10 feet short of a second home run, which easily moved Mark over to third. But Young and Whitesell struck out (the latter on an extremely iffy call) and Jimenez escaped unharmed yet again.

The two starters were on opposite ends of the spectrum when it came to their last inning. Jimenez used some good pitching and generous calls to get out of the sixth despite finishing with 120 pitches (and hitting for himself to lead off the fifth at 97). Garland wasn't so fortunate. Hovering around the century mark himself, he gave up a leadoff double to Gonzalez in the seventh on an 0-2 count. Torrealba bunted him over to third, and an Atkins grounder to third, which Reynolds couldn't get and Drew had to field, scored CarGo easily to tie the game. Garland struck out Smith to end the inning, though, and left the game with his fifth consecutive quality start (7 IP, 5 H, 3 ER, 2 BB, 5 K). He has just one win in that span, and some of his frustration seemed to boil over in his post-game comments. Jimenez had an almost identical line, with just one less inning pitched.

Helton came up again in the bottom of the eighth already with two hits and a standing ovation, but he got even louder cheers for what he did next -- a solo shot 415 feet into right-center off of Scott Schoeneweis, who, oddly enough, retired both righties he faced but gave up the long ball to Helton. And that was the difference. Arizona went down in order in the final two innings against Juan Rincon and Huston Street, and the ball game was over just like that. 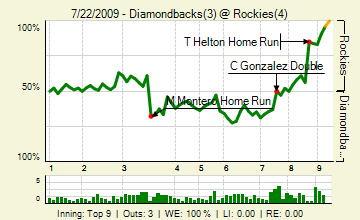 Nobody reached base more than once for the Diamondbacks, which is a pretty succinct summary of their offense for the day. Upton and Ojeda drew the only walks, and Montero's homer was one of just five hits. Reynolds stole his 17th base of the year. Helton had three hits in his banner day, and Gonzalez added the pair of doubles.

The Diamondbacks head back to Chase Field next, where they'll take on the Pirates in a four-game set as part of a seven-game homestand (the defending champ Phillies make up the other part). The good news is that Dan Haren is on the mound for tomorrow's 6:40 start. The bad news is we still suck.

Pictures and thoughts from the park are below. 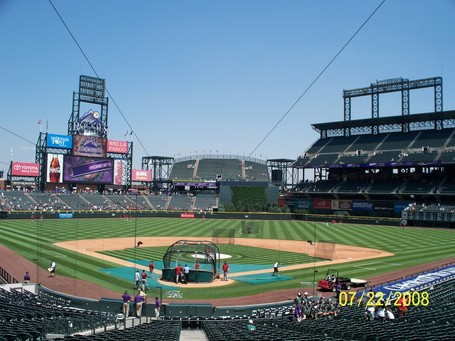 Sure, the inhabitants suck, but Coors Field is still a pretty good-looking place. 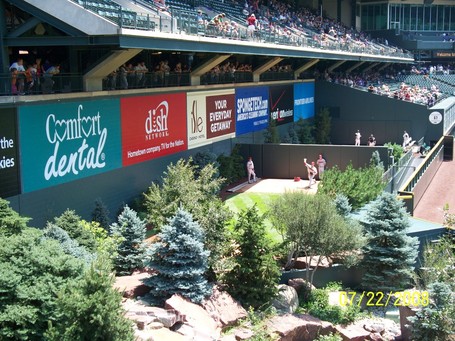 Jon Garland warms up in the best bullpen in baseball. 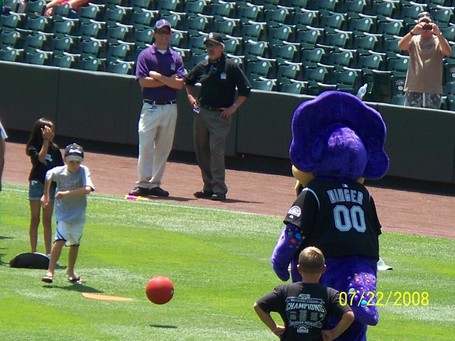 Dinger plays kickball with the kids in right field about 15 minutes before first pitch. I tried to sign him up to add some experience to the bullpen, but he wouldn't switch allegiances that easily. 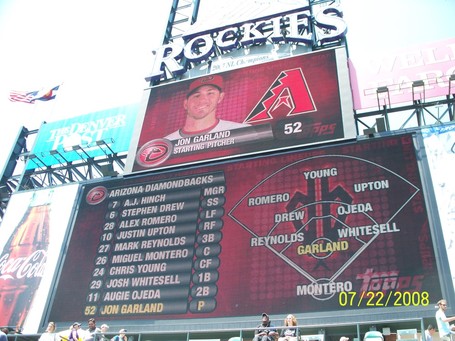 The starting lineup for today's game on the big scoreboard in left, back when there was still some shred of optimism and hope about the outcome. 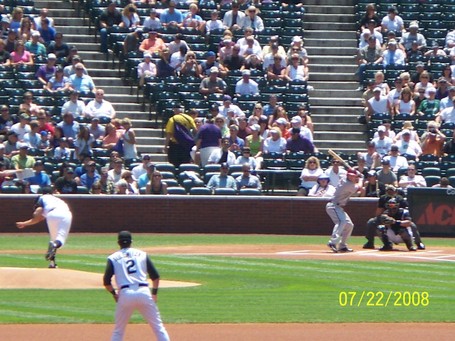 Jimenez delivers the first pitch of the game to Drew, who looked at it for ball one. Fangraphs probably improved our chances of winning from 5% to 6% then. 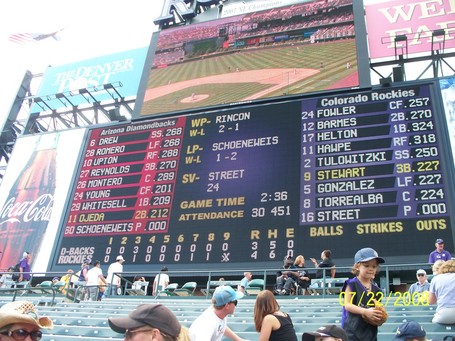 So yeah. That went well.

It was a good day for baseball -- sunny skies, pretty good temperature. It was a little humid from the storms they've been getting around here, but considering the alternative in Phoenix, this was still much better. The fans here are much better about cheering without being prompted, and the speakers blare much less frequently. Of course, the crowd also chose to play "Danger Zone" by Kenny Loggins instead of "Viva la Vida" by Coldplay in between innings, so they may not be as intelligent as I gave them credit for. There were a handful of other Diamondback fans in our section, including a group from Tucson -- we all acknowledged each other after Montero's home run, and were strangely quiet the rest of the game for some reason.

I've been to Coors a few times before, so the field was nothing new, but it's still one of my favorite parks in baseball. Shame we didn't play any better while I was there. Oh yeah, and Whitesell's double came pretty much straight at us. If anybody has the game recorded, you might be able to see us. We're eight rows back wearing red shirts.