Well, that was a pleasant surprise. I gave up after Max Scherzer's feeble bunt - and equally feeble effort to run it out - resulted in our second inning-ending double-play in the first three frames, leaving the Rockies three up at that point. Oh, and Scherzer was averaging more than ten pitches per out at that point. Time to bail and watch, appropriately enough as it turned out, Traitor instead. However, hope springs eternal, and I flicked back over in time to see the Rockies' center-fielder wave at a Justin Upton line-drive, in a manner suggesting he had left his butterfly net at home, and it was a one-run game...

Enough to convince me to keep watching? I think not. But more after the jump.

No, I was so entirely convinced we were going to lose this one, that I didn't even watch the bottom of the ninth inning, by which point the Diamondbacks were clinging to a one-run lead. This was, admittedly, partly because Mrs. SnakePit and SnakePit Jr were making Torchwood-related noises and reminding me that this was not exactly a pennant-deciding contest. Oh, alright: and by the time the first commercial break arrived, I flicked back to find the game heading to a commercial break. So either Chad Qualls had been devastatingly effective, or - more likely - a Barmes bloop and Helton blast had ended the game quickly in a Rockies victory.

Color me impressed to discover it had actually been the former, Qualls retiring the final four Rockies in the same number of pitches as it took Scherzer to get Helton alone in the first inning. That sealed a somewhat improbable Arizona victory - you don't win many games where your starter has to be lifted after four innings, having thrown 95 pitches. In fact, that's only happened once this year in the National League: Chan Ho Park threw 96 pitches for the Phillies on April 12th, and had to be bailed out in the fourth, but they still won 7-5 - coincidentally, that was in Coors Field too. Scherzer struck out six, but allowed seven hits, a walk, and four runs, all earned.

Fortunately, the good bullpen decided to show up, restricting the Rockies to just one hit over the remaining five innings. That was an RBI triple off Jon Rauch with two outs in the eighth, putting Colorado one behind, and bringing in Qualls for a four-out save - as noted above, he chewed through the opposing batters without issue and at a high rate of knots. However, credit should be given to Clay Zavada, who pitched two shutout innings and Juan Gutierrez, who got the win for his scoreless seventh inning. Between them, they staved off the home team, and gave the visiting offense time to climb back into the game.

Ah, yes: our hitters. It didn't look good early on; it seemed that every time we got someone on, we'd contrive to hit into a double-play, highlighted by the World's Shortest Bunt Attempt from Scherzer in the third. Add Mark Reynolds getting picked off second-base, and despite an Upton RBi groundout, we hit the middle of the fifth still three behind, with only twelve outs left. Even after Upton knuckled the ball to the outfield wall for a triple, becoming the tying run on third with one out, we seemed to be committed to FAIL - he didn't come home on a ball to the shortstop, even after Troyboy bobbled it. Similarly, Stephen Drew's single in the seventh tied the game and loaded the bases with one out - we couldn't score any more there either.

However, M&M took care of business in the eighth: Reynolds singled and Miguel Montero continued his lethal streak of hitting with his eighth homer of the year to give Arizona the lead for good. It was one of two hits for him - his twelfth mutli-hit game in the past 26, over which time he has batted .363. I doubt there has been a more productive catcher in baseball over that time, and it presents management with the potential for an interesting decision when Chris Snyder comes back, probably towards the end of next week. Montero is now hitting .290 for the year, far above the 'official' #1 catcher's .224.

Drew seems to have embraced a return to the lead-off spot enthusiastically, cranking out four more hits, along with a walk. Reynolds and Chris Young each had two hits, the latter getting his average up to .204, a number on the season not surpassed since April 28. [There'a an Interesting article at fangraphs on Young, which suggests he's getting screwed by the umps] Augie Ojeda, who didn't start, but came in as part of a double-switch for Scherzer, drew a couple of walks. As a whole, the team threw 174 pitches to get the win; perhaps surprisingly, that wasn't even the most in a regulation victory this year, as it took 184 to beat the Nationals 10-8 on May 10th. Another Scherzer start, of course... The franchise record is 199, on May 29, 2007, an 11-5 victory over the Phillies. 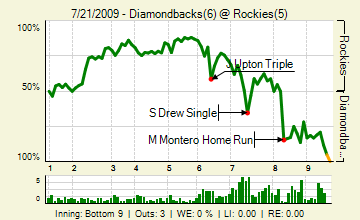 Nice comeback victory, from a Win Percentage of only 11.7% in the bottom of the fifth inning. 'Skins ruled the Gameday Thread with 102 comments, ahead of kishi and hotclaws. Also present: soco, unnamedDBacksfan, njjohn, venomfan, westofrome, Azreous, rapdawg, piratedan7, 4 Corners Fan, Clefo (we'll be round for your liver tomorrow, as you offered!), snakecharmer, SeanMillerSavior, Wailord, sayheyupton and TwinnerA, so thanks to all of them for their participation.

Sets up the rubber game of the series tomorrow, with Jon Garland going against Ubaldo Jimenez - it's a day-game, so remember that it'll be a 12:10 first pitch, Arizona time. See you for that: azreous on the recap, from behind enemy lines in Coors Field, if he makes it out of there alive...