I set the DVR for this game should anything exciting have decided to happen while I was working on wedding stuff with a friend. However, based on the box score and the few, woeful comments in the gameday thread, I think I'll just hit the "delete" button and do the best I can based on other reports.

The Diamondbacks were doomed early on, with an unturned double play in the first inning leading to a two-run double by Troy Tulowitzki. It was a lead the Colorado Rockies would never relinquish. Doug Davis couldn't escape the third inning, giving up 8 runs, and though Arizona rallied in the 8th and 9th innings to bring the game within grand slam distance, the Rockies held on to win 10 - 6.

Should anybody want them, gory details after the jump.

It was clear early on tonight that this would not be one of Arizona's prettiter games, though I was hoping maybe getting all the cobwebs out in the first inning would help them the rest of the game. Nope, not so much, it seems. The Diamondbacks failed to capitalize with two runners on in the first inning (including an intentional walk to Mark Reynolds), and it was the Rockies who then made the most of their opportunity in the bottom half of the inning. After Clint Barmes was almost picked off of first base, he then successfully stole second, and after a should've-been-a-double-play-fielder's-choice, both he and Todd Helton scored on Tulo's double past Upton to right-center field to put the Rockies ahead 2-0.

More base runners for Davis came in the second inning, and they scored courtesy of a successful suicide squeeze followed by a 3-run home run by Dexter Fowler (he of 3 home runs total this season). Come on Douggie, at least maybe we can come back from a 5-0 defecit, right? Oh but nooo, thank you so oh so much for walking the bases loaded in the third inning, all of whom would also score. Final line for DD: 2.1 IP, 6 H, 8 ER, 4 BB.

The B-bullpen performed admirably tonight, giving up only two earned runs in their 5.2 innings of work - one from Blaine Boyer in the fourth, and a solo home run by Chris Ianetta off of Leo Rosales (who went 3 innings) in the 5th. If there is a bright spot in tonight's game, it should be this.

It might also be Stephen Drew, who lead the team's offense tonight, going 2 for 5 with 3 RBI (half the team total). Reynolds accounded for the first run of the game in the 4th - a solo home run, but that was basically it until the 8th inning. Jorge De La Rosa went 7 strong innings tonight, and got the win despite his bullpen being shaky and nearly coughing it up at the end. Chad Tracy, Drew and Alex Romero combined for two runs in the 8th - no thanks to Gerardo Parra, who grounded into an inning-ending double play to end the threat - and Chris Young, Luke Carlin (who is certainly no Miguel Montero, even defensively) and Drew again scored 3 more in the 9th. But, Manny Corpas got himself out of trouble by getting Romero to ground out to end the game. 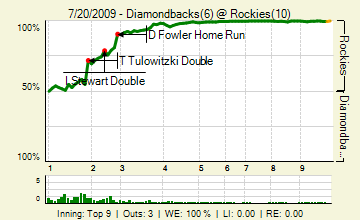 How sad is that? The five runs scored in the 8th and 9th barely made a dent in the fangraph! I think fangraphs is getting smarter - it knows the Diamondbacks wouldn't come back from that defecit. An equally as maudlin gameday thread - barely over 300 posts, with 'Skins leading the way, though not even he was in triple digits. All present were: Wailord, westofrome, DbacksSkins, kishi, hotclaws, snakecharmer, TwinnerA, pierzynskirules, 4 Corners Fan, BattleMoses, jazzbo13, Scrbl, rapdawg, Fiona, unnamedDBacksfan, njjohn, Clefo, katers, Muu, and rich101682. Looks like we may have gotten a few new fans tonight - welcome! Hope tonight's poor performance by the team tonight doesn't scare you away. Don't worry, you get used to it.

"Well, at least the Padres lost." The Diamondbacks remain two games out of the NL West cellar thanks to San Diego's 3-2 loss to the Florida Marlins. The Rockies, however, now jump into the lead for the NL Wildcard spot, one half game above the San Francisco Giants (who lost 11 to 3 to the Atlanta Braves - so see, it could've been worse). Game two of this series tomorrow, with Max Scherzer going up against Aaron Cook. Should be better than this one - one would hope...