You couldn't make this stuff up. Doug Davis allowed one run in seven innings, but left with the lead, thanks to Mark Reynolds' 22nd home-run of the year. In his seventeenth start, it looked like Doug would finally get the win without having to pitch shutout baseball. While it was only a one-run lead, surely the worst was over, after a nerve-wracking eighth inning where Jon Rauch, Scott Schoeneweis and Chad Qualls conspired to get into, then out of, a first-and-third, one-out jam. However, the Reds did score the tying run in the ninth off Qualls, and then got a walk-off victory in the tenth, ending Clay Zavada's scoreless streak with a two-out RBI single.

More gory details after the jump.

Poor Doug Davis. In his last three starts, he has now allowed just two earned runs in 21 innings of work - that's an ERA of 0.86. He didn't win any of them, because he has received a grand total of five runs in support over that time. However, Doug should be used to that by now: in his seventeen games, the Diamondbacks have scored two runs or less in ten of them. So, really, he should know better than to allow any runs if he wants to win - or even if he wants his team to win. Arizona are 4-13 in DD starts; in those four victories, the opposition has scored a total of two runs.

So, to be honest, the offense likely deserves as much criticism for this defeat as the bullpen: over the past 24 hours, our batters are 6-for-58 against Cincinnati. Our first run was manufactured nicely in the second. Gerardo Parra walked, stole second, advanced to third on a ground-out, and crossed home on a two-out single by Chad Tracy.  However, Chad couldn't repeat the magic when the same situation [Parra on third, with two out] came up in the top of the fourth, and instead, the Reds tied the game with a Dickerson single.

The Reds should probably have buried Arizona at that point, as subsequently, they loaded the bases with no outs against Davis. However, he got his opposite number to pop-out, then got a force-out at the plate and a groundout, to escape without further damage. This would become something of a theme: Cincinnati would load the bases again in the fifth, and by the time the game was over, they would have left sixteen men on base. However, they probably don't mind too much, since they got the victory.

That was despite Mark Reynolds going deep again. With #22 in the sixth, he surpassed Steve Finley's first-half total from 2004, and has the most HR by a Diamondback player before the All-Star break since Luis Gonzalez has a truly monster start to the season in 2001: he reached the break with 35 homers and 86 RBI. The only other AZ sluggers to have more then Reynolds are Finley (25 in 2000), Jay Bell (24 in 1999) and Matt WIlliams (23, also 1999). Still some time left for Special K to catch up with those guys, however.

True to say that our batters did not cover themselves in glory: for the second day in a row, there were more walks than hits. Optimists will take that as a sign of good plate discipline; pessimists as proof of feeble offense. Reynolds and Felipe Lopez each had a hit and a walk, while Parra and Alex Romero both were held hitless, but reached base safely on a couple of walks each. Three of the free passes came in the tenth, bringing Justin Upton to the plate with one out: he sent a fly-ball to the outfield, but the throw home was in time to get Romero tagging up from third.

The Reds bullpen showed why they are the best in the league, holding the Diamondbacks hitless over three innings of work. The Arizona relievers...less so: seven hits in 2.2 innings. The eighth was mentioned in the introductory paragraph: the ninth saw two singles to lead things off, and two ground-outs scored the tying run off Qualls. Though at least he did manage to retire the pinch-hitting Micah Owings for the third out; it'd have been the supreme insult for him to drive in the winning run against us...again.

Zavada came in for the tenth, and finally dug himself a hole he couldn't escape, loading the bases with no outs. He did the difficult part, getting a K and a shallow fly to right, but a sinking liner on a jam shot went past a diving Augie Ojeda for the win. That ended his streak of scoreless games at nineteen, fourth-best all-time to open a career. A frustrating loss? No doubt, no least for Davis, who reduced his season ERA to 3.15, but still has only three victories in seventeen attempts. It means we lose the series, and are 1-7 in the past eight games. Keep playing like that, and the 7.5 game deficit we have on the Nationals in the Bryce Harper Sweepstakes will soon be a thing of the past. 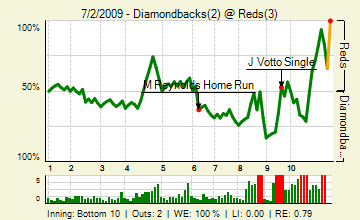 Given the odd start time and lack of television coverage, not a bad turnout, though we still fell short of 300 comments. kishi led the way, with 'Charmer close behind. Also present: sayheyupton, soco, Pyromnc, TwinnerA, unnamedDBacksfan, edbigghead, 4 Corners Fan, emilylovesthedbacks, Jim McLennan, dbacksbj, pygalgia, NotGuilty, bcloirao, CardsIrish, Diamondhacks and Wailord. Off to Colorado we go: personally, I'm looking forward to seeing the return of the Petit Unit to the rotation. That should be...fun...

Have a good, safe Fourth of July and we'll see you at Coors.