Haren 4, Pujols 2: Hinch out-LaRussa's LaRussa and the Diamondbacks hang on

Share All sharing options for: Haren 4, Pujols 2: Hinch out-LaRussa's LaRussa and the Diamondbacks hang on

It's always a pleasure to see a great pitcher going up against a great hitter, and the match-up of All-Stars Dan Haren and Albert Pujols lived up to billing. Honors probably went slightly to Dan Haren: Pujols did go one-for-three with a walk, driving in the first run of the game with a single to left-field in the fourth. However, he struck out swinging to open the sixth, and in perhaps the key out of the game, grounded out to third, ending the eighth innings with Albert representing the tying run.

Dan Haren was...y'know, the only word that can be used to describe him these days is probably 'Harenesque', because the territory he is now inhabiting is getting pretty sparse. He pitched eight innings, allowing only the one run, on four hits (all singles), and striking out eight Cardinals. He did walk two, however - only the second time in the past dozen outings he has issued more than a single free-pass. On the other hand, he also received two walks, at the plate, including one with the bases-loaded that drove in a key run?

Details? You want details? Fortunately, I got details...

To start off with the walks, Haren is the sixth pitcher in franchise history to draw two walks. in the same game You'll probably not be surprised to hear that the last was Micah Owings, on May 2nd, 2008. However, you probably will be surprised to hear that the one before him was Randy Johnson, back on August 10th, 2002. Quite a feat, given his career season high is only four, and he's got the biggest strike-zone in baseball history. The Big Unit was also the last AZ pitcher with a bases-loaded walk, Adam Eaton giving him four straight wide ones on May 6th last season.

However, that's the cherry atop the icing on the delicious confectionery of another Haren super-quality start - his 13th this year, allowing two earned runs or less in seven-plus innings. It took 113 pitches, and after Pujols broke up the shutout, Haren didn't exactly crack - he simply retired the next 17 Cardinals to come to the plate. He seemed to have some issues with the strike-zone in the first, and it was interesting how home-plate umpire Wally Bell called Haren back for a chat as he headed to the dugout after completing his evening at the end of the eighth. It seemed fairly aimiable; still, not something you see often. Chad Qualls allowed a run and brought the tying run to the plate in the ninth, but got the final three outs to lock things down.

The eighth inning was a delightful chess match between Tony LaRussa [managing his 4,703rd career game] and AJ Hinch [#62], the two trading pinch-hitters and relief pitchers like pawns. With men on second and third and two outs, LaRussa intentionally walked Chris Young to load the bases and get to the pitcher's spot, perhaps expecting Hinch to pull Haren and go for a pinch-hitter, in hope of adding some insurance - we only had a one-run lead at that point, and Hinch had done it before. Our manager didn't blink, leaving the decent-hitting Haren io face a wild reliever. And it paid off in spades, with a bases-loaded walk doubling our lead.

It probably should have been a good deal easier for Arizona, except that our hitters were 2-for-13 with runners in scoring position, and in addition, had a couple more brain-farts on the basepaths, with men on the corners and one out. In the first, Felipe Lopez broke for home on a grounder to the shortstop by Mark Reynolds and was thrown out at the plate, not even attemping to slide. And in the ninth, Reynolds was picked off first, but the throw hit him in the back as he headed for second. Justin Upton tried to go third to home, but was similarly dead in the water. However, it ended happily, Miguel Montero doubling down the line to score Reynolds - if he'd still been being held on, at first it'd have been an easy play for the defense.

Montero continued his torrid streak, tying a career high with four hits, getting his season average up to .285, including his second homer in consecutive games. Anyone else glad that the trade rumors which had him going to the Red Sox in the off-season, turned out to be nothing more? At this rate, when Chris Snyder comes back at the end of the month, he may find himself not doing too much. Or indeed, he may not even be in Arizona, with a report apparently indicating, we "are willing to move" our hitherto-main catcher. Reynolds added three hits, while Lopez had a hit and a walk.

Upton continues to struggle, going 1-for-5, with the hit an ugly infield one. He's batting .179 in fourteen July games, worse than he was over the first fourteen games, when his .190 average had people calling for his demotion to Reno. Of course, a slump like this at the start of the season is a lot more noticeable than one when you start of hitting .320. However, what's perhaps more disturbing is Upton's K:BB line for the month, which is sitting at 23:2. And I'm wondering where has Augie Ojeda gone? Thought he might come in as a defensive replacement today: no dice. His entire contribution in the past five games has been one pinch-hit at-bat in a blowout loss. 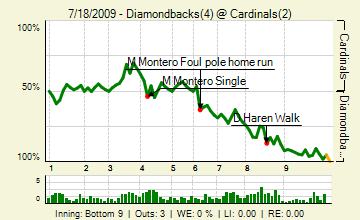 It's perhaps also worth mentioning that Haren had the second-most positive percentage on the hitting side, at +6.1%. Better turnout in the Gameday Thread too, comments returning to nearer-normal levels in the hundreds: unnamedDBacksfan led the way for the second straight game, with the following also participating: edbigghead, snakecharmer, hotclaws, Giannaros, Wailord, marionette, Turambar, 4 Corners Fan, kishi, Lisalisa8, rapdawg and Zephon (or maybe it was Emily - we can never be sure...).

And with that, off to enjoy the start of my weekend. Dahlian is on the recap tomorrow, (first pitch just after 11am Arizona time)  but I'm rounding up some random statistics which I stumbled across in the All-Star break. So I'll throw those up at some point in the day or evening.