I waited five days for this? Weak offense. Failure to make the most of opportunities. Brain farts. Decent outing by the starter, followed by ineffective work from the bullpen. In other words - pretty much the same, disappointing Arizona Diamondbacks' performance with which we became all too familiar in the first half.

One at-bat in the sixth sums it up nicely. Mark Reynolds had singled, putting our lead-off man on base for the fourth time already this evening. However, while Miguel Montero was at the plate, Reynolds was found dawdling too far off first-base, and a snap throw down by [insert first name here] Molina saw Special K picked off. Montero then went around on a full-count - the ball got past Molina, but Montero thought he'd walked and began meandering down to first. By the time he realized it was actually a dropped third strike, Molina had plenty of time to recover the ball and throw the ball up the line to beat our catcher there.

Albert Pujols. Wow. Dan Patrick's phrase, "You can't stop [blank], you can only hope to contain him," has become a massive cliché through overuse. However, when it comes to Pujols, it's really the only applicable phrase. Two more home-runs gave him 34 for the season already, putting him on pace for sixty. That'd be a number not seen legitimately i.e. not by Bonds*, McGwire or Sosa since the days of Roger Maris. It is somewhat curious. While a great pure hitter - his lowest BA for a season is .314 - Pujols' homer totals for the past couple of seasons are 'only' 32 and 37. So the former is already eclipsed with seventy games left, and the latter will be matched by about next weekend, at the current pace.

Still, it goes to show what a truly great hitter will do in a line-up. He changes the dynamics of the game in a way only Bonds* did at the height of his power [Pujols is projected for 58 intentional walks, more than anyone ever save Bonds* from 2002-04]. He drove in and scored the first two Cardinals' runs, long balls off Jon Garland which led off the fourth and sixth inning respectively, and was intentionally walked with two men on in the seventh, giving the batter behind him the chance to cash in with a two-run single that basically ended the game from Arizona's point of view.

Jon Garland was otherwise fine - those two blasts to Albert were the only damage allowed. He scattered seven hits and a walk over six innings, so that was another quality start, reducing his season ERA to 4.45. However, his cause was not helped by the bullpen allowing four runs in two frames: Scott Schoeneweis loaded the bases in the seventh before being replaced by Esmerling Vazquez who then allowed the two-run single mentioned above. Clay Zavada then gave up a two-run homer in the eighth to "Nick Stavinoha". I use quotes because I suspect that it was probably Pujols in disguise. Oh, that Tony La Russa...

Arizona had some chances - as noted, we had little difficulty getting the leadoff man on. The best chance was probably when the game was still scoreless in the third. Garland and Felipe Lopez singled to lead things off, but Stephen Drew couldn't get the bunt down [I don't know why he is asked to do that so often, because he seems to have major problems handling the bat effectively]. Justin Upton struck out - he was 0-for-4 with three strikeouts, and Mark Reynolds grounded out, ending the third.

We didn't have an at-bat with runners in scoring position thereafter. Lopez did have two hits and a walk on the night, while Reynolds and Montero each had a pair of hits. The last-named finally broke up the shutout with one out in the ninth, going deep the opposite way, for his sixth of the year. That was more of a sympathy run than anything else, and was the last spasm of the Diamondbacks' corpse before the rigor of defeat set in [sorry, Mrs. SnakePit has been watching a lot of CSI, and it has rubbed off]. That nice winning streak we put together before the All-Star break seems a very long time ago now. 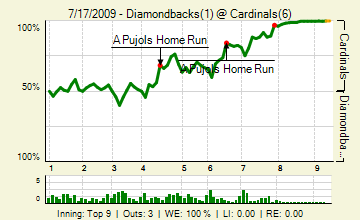 Seems like everyone was still on the All-Star break: 89 comments, the first time we've failed to reach at least three figures in a very long time. What are we, the Marlins? :-( Maybe we should pretend the game never happened, and petition Bud Selig for a do-over. unnamedDBacksfan led the way, so credit there. Contributions were also to be found from 4 Corners Fan, TwinnerA, hotclaws, katers, Muu, kishi, emilylovesthedbacks and jazzbo13. Here's to better things tomorrow.