Share All sharing options for: Marlins 8, Diamondbacks 1: Davis Gets Phished

Ho hum. Just in case we were getting a collective big head from winning 7 of 8 going into the All-Star Break, the baseball gods knocked us down a rung today. The Arizona Diamondbacks, in fairly ignominious fashion, completed the official first half of the season today, dropping the series finale versus the Marlins 8-1. 1 run? 1?? Really?? After we scored 20 runs in the previous games in the series? Yep. Most notably, the offense and defense regressed to April 2009 levels, rather than the improved edition we've been seeing lately.

Follow me after the jump for all the exciting gory details!

This one was as good as over almost before it started. Doug Davis, who came into the game with a sparkling 3.13 ERA, gave up 5 runs in only 4 innings, including 3 in the top of the 1st, putting the Marlins squarely in the driver's seat. To be fair, he was also let down by his defense, although no errors were given. Several balls rolled into the outfield that probably could have been fielded and turned into outs in a regression to the sloppy style of baseball that we sorta thought we had gotten over, at least since Reynolds' rant. It took Doug a whopping 99 pitches to get through only 4 innings, although he did hold the Marlins scoreless in the 2nd and 3rd, before giving up a two run blast to Jeremy Hermida in the 4th off the right field foul pole. 3 walks in 4 innings didn't help, either, despite an umpire with a strike zone roughly the size and shape of Nevada -- at least for the Marlins' pitchers, for whom everything low and inside was called a strike. To be fair, Marlins All Star Josh Johnson DID have a fairly impressive game, alternating between the inside and outside corners of the plate and showing why he's their ace. Perhaps today's game was just an example of what might have happened last night to Jon Garland, had the Dbacks not rolled up three double plays behind him. Neither Chad Tracy nor Davis were assessed an error later, when Tracy fielded a routine grounder and tossed to Davis, slightly down the line, who flat-out missed the bag with the side of his foot. Although it went as a hit, it's a perfect example of the kind of shoddy plays made by the infielders today.

After getting 13 extra-base hits during the previous 3 games, the offense looked punchless once again as it  was held to 9 scattered one-baggers. The team went a woeful 1-for-6 w/ RISP, scoring their 1 run in the 7th. Until that point, no Dbacks hitter had even reached 3rd base. But, it didn't HAVE to be like that. Felipe Lopez led off the bottom of the first with a single, but was caught stealing second by about 5 feet, on an 0-2 pitch. As Grace noted, pitchers often toss a throwaway fastball on 0-2, so it was almost like a pitchout. Naturally, on the very next pitch, Stephen Drew drove a single into right field that very well might have scored Flip, had he been on second. In the 7th, Augie Ojeda reached on a fielder's choice, before going to 2nd on a Lopez groundout and finally scoring to break up the shutout on Drew's RBI single. For the game, Drew went 3-5, while Lopez was on base four times on two hits and two walks. Chad Tracy also had two hits, while Gerardo Parra reached once on a walk and Alex Romero had a pinch single. Tony Clark, who has apparently played his last game as a Diamondback, saw his last AB w/ the Dbacks: naturally, it was a pinch strikeout for Leo Rosales in the 5th. Our 3 and 4 hitters struggled again; Mark Reynolds and Justin Upton combining to go 1-8 with 6 strikeouts and 8 men left on base. Upton smacked a single into left field in his last game before his first All Star Game.

The bullpen performed... credibly, I suppose, going 5 innings and allowing only a single earned run, by Esmerling Vasquez. Clay Zavada allowed two unearned runs in the Dreaded Eighth Inning© after a sharp grounder bounced about 20 feet straight up off of Reynolds' glove and into left field. Zavada's ERA dropped to 1.69. Jon Rauch, Juan Gutierrez and Leo Rosales all pitched scoreless innings; Rauch continues to be essentially our best reliever lately. Gutierrez helped himself out with an impressively fast move to first, picking off former Dback Emilio Bonifacio. 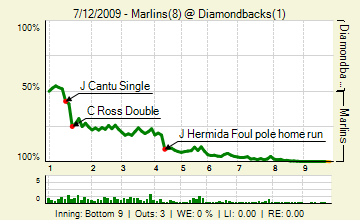 It's a testament to how quickly the game got out of hand that Drew led all players with a scant 2.3 WPA. Chad Tracy, Gerardo Parra, Juan Gutierrez and Leo Rosales were also in the black, while Alex Romero and Jon Rauch managed to add exactly nothing either way (0.0%). Everyone else was in the red as far as WPA is concerned.

No game tomorrow, for obvious reasons. I'm assuming Jim will have a Gameday Thread posted for the All Star Game, so I'll see you there. The Dbacks head next to St. Louis -- Dan Haren and Justin Upton will be there first, as All Stars, and the rest of the team will join them for a series against the Cardinals to start the official second half of the season.

Let's hope it goes a little better than the first half.