Diamondbacks 5, Marlins 1: A Garland for the Winner, a Win for Garland

Share All sharing options for: Diamondbacks 5, Marlins 1: A Garland for the Winner, a Win for Garland

Finally. It's been a long time, but the victory today, coupled with losses in the other two seasons, means we are now closer to last year's record than 2004's - I always promised myself that when that happened, I would pull the metric. However, Arizona please note: it is just being benched, not DFA'd [or "Clarked", as I hope we'll soon be referring to the process]. So if you revert to sucking, it'll be back on top of the recaps before you know it.

Today, that wasn't a problem, Jon Garland getting his first win since...well, the last time he faced the Marlins, actually. He pitched eight strong innings, allowing only one run, and the offense - while wasting a few chances - did enough to keep things mostly comfortable after getting out ahead early, thanks to a three-run first inning. It was the Diamondbacks' seventh win in their last eight games: if they can take tomorrow's first-half finale, it'll be a spell not surpassed since taking nine of ten from July 21-August 1, 2007.

Let's cross that when we come to it, however. Details of tonight's victory after the jump.

Jon Garland was the winner - and justifiably so, with a Game Score of 68. That's his second best of the year, trailing only the seven innings of three-hit, shutout baseball he threw on May 6, which rated a 70. However, that was against San Diego, so probably should automatically be discounted by about 20% for the Padres' suckiness. Therefore, let's call this his best outing of the season, though he would probably insist on a good chunk credit being given to the defense. They turned three double-plays: two off the bat of Baker, and the third an amazing grab by Chris Young at the outfield wall, that led to an easy twin killing, as the runner on first clearly didn't expect the play to be made.

It was particulrly impressive for Garland to get the win at Chase. You have to go back all the way to April 20th to find his last success here, and he'd struggled his way to a home ERA of 7.15, with opponents hitting .330 off him in Phoenix. Both figures should drop significantly after today: he scattered seven hits but had good control, walking only one Marlin. While there was some wobbles earlier on, like the first two Florida hitters reaching in the second, it was nothing a strikeout followed by a double-play couldn't resolve.

The only damage came in the third, with a two-out RBI single. With a little help from more double-plays, Garland faced the minimum 15 batters from the fourth through eighth innings, exiting at that point having thrown 117 pitches - by coincidence, the same number as Haren threw last night in his complete game. While not a save situation, AJ Hinch was taking no chances after Thursday night: he sent closer Chad Qualls out there for the ninth. Chad worked around a double, to post a zero and lock down the victory.

The offense did enough, and going 11-for-32 on the day is certainly something to be pleased about. However, the game should have been blown open on a number of occasions, and the clutch stats reflect that, the Diamondbacks only going 2-for-15 with runners in scoring position. Miguel Montero had a key hit in the first, hammering a ground-rule double down the line in right, and a ground-out added a third run. Montero has been, perhaps mostly unnoticed, remarkably productive after taking over for Chris Snyder. His first game as our #1, he went 0-for-3, but he's raised his batting average more than 50 points since then: two hits today means he's batting .341 (28-for-82) over that time.

Justin Upton also had an excellent game, with four hits, including a triple; Mark Reynolds had a hit and two walks, which Young had a hit and a walk. On the other hand, Montero overslid a base again, this time getting himself tagged at third for the first out in the third by a grateful Marlins' defense. We should also have done a lot more with situations like the seventh inning, where we had men on second and third with nobody out, yet failed to score. A groundout back to the pitcher, a strikeout and another groundout left us with an empty feeling - fortunate that this failure to add on didn't turn around and bite us later.

Random factoid: the Diamondbacks now have a better run differential (-32) than the New York Mets (-35). Indeed, only five teams in the National League are in positive territory there, in part because we were outscored by the American League by 140 runs when we faced each other 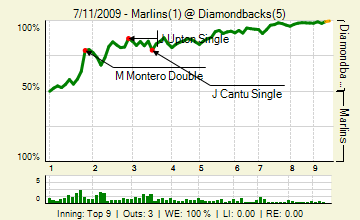 Light Gameday Thread, with only a dozen people in the comments. 'Skins lead the way;  with hotclaws in second. 'charmer would probably have pushed both of them closer if she hadn't been nursing a raging hangover from a bachelorette party last night. Or something like that. :-) Also present: 4 Corners Fan, Fiona, Giannaros, soco, emilylovesthedbacks, Tim Weiss, Azreous and unnamedDBacksfan, so thanks to them. I must confess, I bailed after we scored two runs and went off to Arriba for dinner. We did at least convince them to switch one of the TVs from the USA-Haiti soccer, so got to see most of the game.

And that's it as far as recaps from me go for the first-half. Report card for the team will follow on Monday, with 'Skins recapping tomorrow series finale - so I might just plow into a few Blue Moons between now and then, to help me forget the past three months of largely disappointing play by the Diamondbacks. It does seem to be ending on a bright note, however; a win tomorrow would definitely end things the right way. We'll see.