Diamondbacks 8, Marlins 0: Dan Haren to Tim Lincecum - "Get in line."

Share All sharing options for: Diamondbacks 8, Marlins 0: Dan Haren to Tim Lincecum - "Get in line."

Actually, the headline quote was going to be "Suck it," but I suspect Yahoo! might have objected to that. However, tonight proved beyond all doubt who is the master and who is the pupil. Dan Haren must start the All-Star Game for the National League, not Tim Lincecum. The Giants' ace may have taken a no-hitter into the seventh inning last night, but he was chased from the mound before getting the next three outs. And, besides, that was against the Padres [who came one error from getting perfectoed tonight], so it hardly counts.

In contrast, Dan Haren pitched a complete-game shutout against a much better team, the Florida Marlins, allowing four hits and one walk while striking out ten, in a masterful performance that was a joy to watch, and lowered his ERA to 2.01, the best in the major-leagues. All-Star game aside, what it also did was wash away the dreadful after-taste left by last night's abomination. While our relief corps may suck, with Haren on the mound, who needs them? Bullpens. They're vastly over-rated...

There were some eerie echoes of last night's contest this evening, not least the Diamondbacks leading both games 7-0 after five innings. However, there was no way Haren was going to go into home-run mode like Yusmeiro Petit, and continued to flummox the Marlins, with a devastating array of pitches - looked like a lot of cut fastballs. The numbers speak for themselves: 30 called strikes, 15 swinging strikes and only 11 fouls the entire game The start got a Game Score of 88, making it the best by a Diamondbacks pitcher this year, surpassing the 84 notched by Haren when he two-hit the Astros last month. A brilliant way to finish the first half.

Where does Haren's performance this season stand, when compared to the greatest in Diamondbacks history to date. Okay, it's a short history, but it's one that has already included five Cy Young awards and five runners-up, so I'd certainly stack it against any other team in the major leagues over the period. Also, obviously, Haren has only pitched a partial season, and over his career, his second-half ERA has historically been a run higher than before the All-Star break. If that happens this year, it would give him an estimated ERA of 2.47. However, for the moment, let's just go on what we have seen to date. Here are the ten qualifying Arizona pitchers with the best ERAs.

[Morning update] I added an extra column to the table, giving the pre- and post-All Star break splits for each of the ten seasons. The only superior [or even comparable] first-half number to Haren, is Randy Johnson's 2000 campaign, though Haren still has a better percentage of quality starts. Johnson also went steadily downhill more or less throughout the year: dividing his 35 starts into five groups of seven, his ERA in those went 0.93, 1.93, 3.33, 3.98, 3.64. Dividing Haren's outings into three groups of six, we get 1.47, 3.21, 1.40.

Yes. Haren has been that good. If Brandon Webb had been healthy, one can only speculate on how good a 1-2 punch they may have been; conceivably the equal of, or even better than, the Randy and Curt pairing which took the team to the 2001 World Series. Though it should be mentioned, that team also mashed, scoring an average of more than five runs per game, not the 4.5 posted by the 2009 roster. Still, it has been a joy to watch Haren almost every time out this year. To update the stat posted in the GDT, he now has 12 starts going seven or more innings, and allowing two earned runs or less. Only six NL pitchers in 2008 had more over the entire season. [Webb and Haren each had 13]

One final thing which I think deserves particular mention, is the reaction of the Chase Field crowd. Normally a laid-back bunch, virtually to a man, woman and child, they were on their feet for the entirety of the final out in the ninth inning, which is a rare event. I think there was a certain amount of gratitude to Haren, following what happened last night - but there also seemed to be a genuine appreciation for the brilliance which Haren has brought to the mound almost every time he has pitched. In a season which has so far leaked disappointment in many ways, Haren has arguably been the best thing we've had.

Heck, he even got an RBI single as part of our fourth inning, though he'd probably admit it looks a great deal better in the box-score than on the field - an ugly 50-foot squibber towards third that could not have been more perfectly placed by hand. That came after an RBI triple by Parra; the Marlins then intentionally walked Chad Tracy to get to Haren, but that move backfired badly. Less perhaps for Haren's hit, than the three-run bomb launched by Felipe Lopez into the pool area which immediately followed, completing the scoring for Arizona in the five-run frame.

The Diamondbacks got on the board first, with a solo home-run by Miguel Montero in the second, and added on with an RBI triple by Stephen Drew in the third. The five-run outburst then padded the lead, and a sacrifice fly by Tracy in the eighth provided the final margin of victory [and provoked a sigh of relief, as the gap finally expanded beyond the seven-run lead blown last night!]. Lopez and Drew each had two hits, while Mark Reynolds and Tracy had a hit and a walk. I note, with some pleasure, that eight of the nine players in the lineup tonight now have batting averages of .259 or higher [Tracy's .214 being the only exception].

[Morning update] Audio clippage from Haren and his team-mates on the bounceback victory. 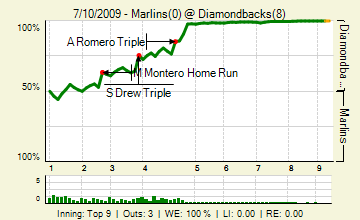 A much more cheerful Fangraph than last night, with none of the eighth-inning plummeting experienced 24 hours or so ago. And a much more cheerful Gameday Thread too, though it wasn't until the final out was recorded, that I think most of us felt that the demons had been properly exorcized. 'Skins and hotclaws took the leading spots in the thread, with BattleMoses completing the podium. Also present: unnamedDBacksfan, Azreous, emilylovesthedbacks, Wailord, NotGuilty, pierzynskirules, marionette, Fiona, asteroid, pygalgia, rapdawg and jonny-yuma.

Normal service resumed, we head on to the remaining two games. 5:10pm start tomorrow, with Jon Garland getting the start for us. Don't know about you, I'll certainly sleep a great deal better tonight than I did yesterday.