Diamondbacks 7, Marlins 14: The Mother of All Meltdowns

Share All sharing options for: Diamondbacks 7, Marlins 14: The Mother of All Meltdowns

Recap v1.0 The Diamondbacks easily rolled over the Florida Marlins to extend the team's winning streak to six games.

Recap v2.0 The Diamondbacks withstood a late inning comeback by the Florida Marlins, and held on to extend the team's winning streak to six games.

Recap v3.0 Well, if you're going to end a win streak, you might as well do it  in style. In their 1,868th regular-season game, the Diamondbacks blew a seven-run lead for the first time ever, the bullpen suffering its most spectacular implosion, in a season aready filled with horrific performances. Going into the sixth inning down 7-0, the Marlins scored three in the sixth, one in the seventh and then plated TEN runs in our bete noire, the eighth inning. What looked like set fair to be our sixth win instead turned out to be one of the most humiliating defeats of all time.

Details after the jump. If you want them.

As noted in the preview, this was a game I really didn't expect to win. So I guess the end result - and, indeed, perhaps the final score, didn't really surprise me, especially with Yusmeiro Petit starting. But he was great for five innings, before someone in the Marlins dugout entered the necessary cheat code and the Petit Unit reverted to his usual Home Run Derby mode. The results: three hits and two homers to the next four batters faced, three runs, and the rapid reaching of AJ Hinch for the 'reset' button. However, until that point, he'd pitched shutout baseball, mixing his pitches well and hitting his spots. Overall, a line of 5.1 innings, three earned runs on six hits and two walks, is very acceptable for someone filling in at the back of the rotation. The bad news is, his next scheduled start will be July 21st...in Colorado. Ulp.

When you have a seven-run lead going into the sixth, you really do not want - or expect - to see the tying run on base with no outs in the top of the seventh. However, that's exactly what the Marlins did. After Doug Slaten got the last two outs in the sixth, he allowed a ringing triple and a double to the first two batters in the seventh. Esmerling Vasquez came in and initially fared no better, with a walk and single to load the bases - the latter put the tying run aboard. However, he fought back, first getting a shallow pop-up, then getting notorious snake-killer Cody Ross to ground into an inning ending double-play. Diamondbacks Nation collectively exhaled.

That was, however, more like a teaser trailer for a snuff movie, compared to the horror which unfolded in the eighth. While I am not usually a fan of the "reprint the play-by-play" approach to recaps, I've got absolutely nothing which I can usefully or meaningfully add to what follows. Nothing. I tried. Really, I did. I stared at the box-score for so long that, to borrow a concept from Nietzsche, it began to stare back into me. So let's just stick to the bald facts.

That's fourteen men sent to the plate, with ten runs on eight hits, two walks and two errors - though there were several other plays in the inning which probably could have been tagged as E's, had the official scorer been feeling a little less charitable. You might be surprised to learn, it wasn't actually the worst inning in franchise history, though it was the worst ever endured at Chase Field. We have had several ten-run innings previously - two of which actually came in back-to-back games! - and one nightmarish eleven-run one. Here are the previous instances:

Total line for the relief corps tonight:
Arizona bullpen: 3.2 IP, 11 H, 3 BB, 11 R, 8 ER
Well done. You must get up very early... What's even more remarkable is that our relievers [with a little help from Petit] managed to turn a seven-run lead into a seven-run deficit, without us ever seeing our best bullpen pitchers. No Chad Qualls. No Jon Rauch. No Clay Zavada. No Tony Pena. Qualls, I can perhaps understand, having worked the previous two games, though we did see Zavada warming up. Admittedly, things got out of hand fast in that eighth, but there had to be a point in the middle at which this should have gone from B-bullpen to the A-guys.

Do wonder why Schoeneweis got to face a right-handed pinch-hitter, with Arizona still holding a two-run lead, one out in the eighth and men on the corners. The resulting three-run, go-ahead homer was almost inevitable. Hindsight is 20/20, yet the fact is, he hasn't been able to get right-handers out for three years: tonight, that came back to bite Hinch, hard. Not sure who should have pitched instead. But not sure that really matters, for things couldn't have gone any worse than they actually did.

And it was all going so well, too. A two-run homer by Justin Upton got us off to a good start, and Arizona then took advantage of defensive miscues by the opposition again. The four runs we scored in the third inning were all unearned, coming with two outs, after former D-back Emilio Bonifacio threw a ground-ball into the stands for the Marlins. Gerardo Parra drove in a run with a single, Chris Young had a two-run triple, and even Tony Clark doubled home a run. Add another RBI for Young in the fifth, and we were 7-0 up and looking fair. Little did we know...

Normally, I'd be happy with seven runs on twelve hits. Upton had three, while Parra added a couple, and backup catcher Luke Carlin had his first two hits as a Diamondbacks. Young had a couple of walks in addition to his hit, and Mark Reynolds also drew a couple of free passes. Tonight, any positives to be drawn from the game are more like putting a bow on a box of turds. Here's the fangraph for the game. Note in particular the top of the eighth inning, where our win percentage went from 92.6% to 0.5% while we recorded three outs. That's got to be close to an all-time record. 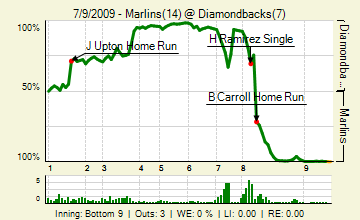 They say misery loves company, and this was probably the biggest turnout in a Gameday Thread - both by comments and commentors - in a long time. 743 by 32 different users with 'Skins getting 155 and 'charmer coming in second. The latter was responsible for suggesting the key to the game on the broadcast tonight: "Another round please." It turned out to be very appropriate, as I'm sure we were all drinking heavily by the end of the eighth. However, I think she needs to be restrained from submitting any more to the booth... Also present: kishi, 4 Corners Fan, rapdawg, BattleMoses, pygalgia, hotclaws, NotGuilty, emilylovesthedbacks, AJforAZ, asteroid, Wailord, venomfan, Fiona, Azreous, drvnlow, Tim Weiss, Muu, Wactivist, PioneerSkies, SeanMillerSavior, notSince86, jazzbo13, dbacksbj, jonny-yuma, Zephon, soco, TwinnerA, unnamedDBacksfan, and IHateSouthBend.

So, the streak ends - not necessarily unexpectedly, just spectacularly. Dan Haren goes tomorrow, so let's get back on the horse and start another streak - though, why do I suspect that, regardless of the score, theeighth inning is going to be extremely nerve-wracking....