Today's TV broadcast brought up an interesting (albeit pretty circumstantial) stat: the Diamondbacks are 1-14 in games following Dan Haren starts. After Haren's masterful performance in all facets last night, I suppose that meant we had reason to be less than optimistic, particularly with young phenom Johnny Cueto on the bump for the Reds. The Diamondbacks did all they could to manifest that destiny through six innings, failing to take advantage of Cueto's wildness to get even one run across, and from that point their fate was sealed.

The early innings could best be described as a plethora of wasted opportunities. They got the leadoff man aboard each of the first three frames but could do nothing with it. Lopez walked to start the first, but three straight outs followed. Parra walked to begin the second, but was thrown out on a failed hit-and-run with one out. Montero, who swung at ball four once trying to protect the runner, ended up drawing a walk, and Tracy walked behind him -- meaning the bases would have been loaded with one out, all without swinging the bat. Benefit of hindsight, absolutely, but the fact remains. That brought the pitcher up with two outs, and also brought the end of the threat. Lopez singled in the third and was bunted over by Drew, but Upton and Reynolds struck out. In the fourth, fifth and sixth, Arizona decided to drop all pretense of success whatsoever and went down in order. Essentially, this let Cueto off the hook; his pitch count was extremely high through the first few frames, but Lopez's single was the only hit he allowed in his six innings of work.

On the other side, Jon Garland continued his Mr. Hyde routine by pitching extremely well on the road. As usual, he had to work around a handful of tight spots, but he kept the score column clear for the first five innings by being remarkably efficient. The only real trouble he faced to that point was in the third, when Chris Dickerson hit a double with one out. Danny Richer (who had six at-bats this season before today's start) tried to score from first, but was gunned down by the cannonating arm of Justin Upton. It took until the sixth for the Reds to finally get someone across -- Dickerson had a leadoff base hit up the middle, moved to second on a groundout, and scored on a little flare to left that nobody could reach in time. Parra might've had a chance to throw Dickerson out, had he cut off Upton's arm and grafted it to his body.

Garland was sitting on a very economical 71 pitches while the offense battled in the top of the seventh. Parra reached on a beautiful bunt to the left side to lead things off, and waltzed over to second on a wild pitch that caromed off the backstop. Chris Young walked, and Montero moved both runners over with a great bunt. Facing a lefty, Roberts pinch-hit for Tracy, but struck out anyway. Desperate for a run or two in that situation, Garland was removed for Tony Clark, who drew a walk to load the bases. But Lopez flew out weakly and the inning was over.

With Garland out of the game, Clay Zavada was brought in to keep it a one-run game. He struggled a bit, getting tagged for a single, walk, and single and only getting one out in the process (and he was fortunate that Jay Bruce was the lead runner, which loaded the bases instead of being first and second with a run in). Juan Gutierrez was summoned, faced with a heavy task: keep the game close, and preserve Zavada's scoreless streak to start his career. He was able to do both, punching out Dickerson and getting Jerry Hairston to pop it up to the left side, keeping it a 1-0 game. So even though Zavada had a WHIP of 4.50 in today's outing, the streak lives on -- 19 appearances and 18 innings pitched.

Staring at an imposing number in the opponent's line score (i.e., "1"), the Diamondbacks' 2-3-4 hitters went down 1-2-3 in the eighth without so much as a whimper. Gutierrez continued to work in the bottom half, erasing a leadoff single by getting Brandon Phillips to ground into a 5-4-3 double play and getting Lance Nix to foul out harmlessly to Reynolds. But Parra, Young and Montero could do nothing against Francisco Cordero in the ninth, and that was that. No runs, no win. Granted, you're not going to win many games where you can only muster two hits and you get set down in order five of the last six innings. 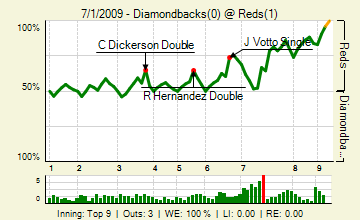 Roberts gets stuck with the bulk of the blame thanks to his strikeout in a key situation. The 2-3-4 hitters, in that order, round out the rest of the rubble thanks to their 0-11 performance. Garland was forced to eat the loss despite another road gem (6 IP, 6 H, 1 ER, 0 BB, 2 K). Gutierrez just missed Honorable Mention with a +9.3% for his 1.2 innings of solid work out of the pen. The only hitter in the positive was Clark, at a whopping +2.4%; the other 10 batters who gave it a shot were all in the red.

For the Diamondbacks, Lopez and Parra each reached twice, on a walk and a hit. On the Reds' side, Dickerson, Joey Votto and Ramon Hernandez all had two hits apiece. Weathers and Rhodes both had strong innings in relief of Cueto.

Tomorrow is the series finale, a 9:35 a.m. start for all us Arizona folk. It'll be Doug Davis against Aaron Harang, so if you're not fully awake at that point, don't worry. I'm sure Davis' slow work rate and our anemic offense can lull you back to sleep in no time. As a footnote, the 2004 team snapped an 11-game win streak at this point in that season, meaning we've "gained" a game on them in the chase for putridity. Good times.